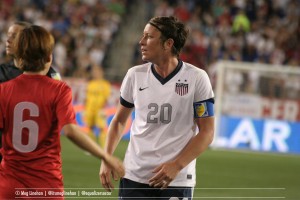 Abby Wambach said U.S. players are not behind getting Tom Sermanni fired. (Photo copyright Meg Linehan for The Equalizer)

The silence from U.S. women’s national team players following Tom Sermanni’s dismissal as coach has been broken. Abby Wambach reiterated what U.S. Soccer president Sunil Gulati said on Monday — that there was no player revolt — and Carli Lloyd said she was shocked just like so many others on the team.

“I was shocked as much as everybody else was,” Lloyd told me on Monday from San Diego.

“It’s not something you think about after getting on the bus after a victory and getting called in for a meeting, so I really was just taken by surprise. It’s just a very tough situation.”

Sermanni told me Monday morning that “seven or eight” players sought him out to say goodbye and a few more emailed, but later said that after counting, that number was 19 of the 23 in camp. That only fueled fire to the whispers that players were behind his ousting, but they say that’s not the case.

Wambach told the Associated Press, “Everybody out there who may think the players made this happen, none of it’s true.”

That’s consistent with what Gulati said on Monday, that players did not seek him out asking for change. But that the firing came as such a surprise to veteran players adds confusion, since Gulati says he consulted players and staff as part of the process of evaluating Sermanni.

“Whenever we have changes or possible changes or directional changes – whatever you want to call it – with our national team program, we do that quite a bit. We talk to players, we talk to staff, we talk to people that observe the team and we also rely on our own assessment,” he said in Monday’s conference call.

Lloyd, a veteran of the team at age 31, says she was not one of the players who spoke with Gulati.

“I really wasn’t aware of if there were conversations, if some people were unhappy,” Lloyd said. “I just go out there and play the game and do what I do best, and that’s just working hard every day.”

Goalkeeper Hope Solo told the AP, “We didn’t play our best soccer in Portugal. We came in seventh place. That’s not good enough for this team. At the end of the day, we failed Tom. We didn’t put together a great tournament.”

Now the U.S. must find a coach just 14 months before the World Cup and with qualifying looming in October. Lloyd said the tight timeline doesn’t concern her, since Pia Sundhage had only nine months until the Olympics when taking over, and she led them to the second of three straight gold medals.

But Lloyd does foresee the new hire coming from within.

Jill Ellis is coaching the team on an interim basis, as she did in the fall of 2012 between Pia Sundhage leaving and Sermanni being hired. Ellis is 5-0-2, with three of those wins against China, who the U.S. plays on Thursday in San Diego (11 p.m. ET, NBCSN and online on Live Extra).

In the last search process, which yielded Sermanni as coach, Ellis withdrew her name from consideration. She is currently the U.S. Soccer development director but has experience as an assistant coach and as manager of U.S. youth teams.

Randy Waldrum and Paul Riley were both finalists for the U.S. job in fall 2012, but both have begun new NWSL coaching jobs in the last five months, Waldrum with the expansion Houston Dash and Riley with 2013 champion Portland Thorns FC.

On a conference call Monday, both Waldrum and Riley said they feel that a coach could potentially manage both club and country, but both denied being contacted by U.S. Soccer to fill the current void.

“I don’t know whether it would be done in this country, but it has been done in other places,” Riley said.

Waldrum: “I think anything’s possible. Depending on the direction that Sunil wants to take things, I think those type of things are certainly doable. There’s a lot of good coaches in the league, but there are a lot of good coaches that aren’t in the league right now. I really don’t have any idea of the direction that he’s wanting to take, but I think that in our sport, probably unlike any sport, many of coaches have worn a lot of hats over the years. I think it’s a doable thing; I think it’s one of those that would take some work to make a reality.”

Gulati says a new coach will be in place “certainly by the summertime schedule…if not sooner.”