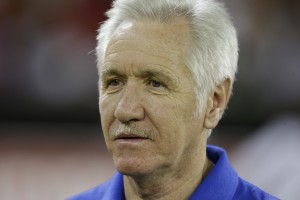 Tom Sermanni says he had no idea he was anywhere close to being fired. (AP Photo)

Tom Sermanni says he was “completely blindsided” by his firing from the head coaching position of the U.S. women’s national team on Sunday, 15 months after taking the helm.

Sermanni, who was dismissed Sunday night after the United States’ 2-0 win over China in Commerce City, Colo., told Sports Illustrated that he did not get any sense of the team being uneasy with him as coach. SI’s Grant Wahl reports that Sunday was the first time Sermanni had spoken to U.S. Soccer president Sunil Gulati since the Algarve Cup last month, and the Scotsman now realizes that the U.S. is “a unique team that has certain demands.”

The questions remain, though. Why now? And why at all? Despite struggles at the Algarve Cup, Sermanni has not only won, but done so with a full rotation of young and veteran talent.

It appears that some U.S. players, according to Wahl, expressed concern regarding the direction of the team ahead of World Cup qualifying in October.

“I would assume obviously there has to be some degree of dissatisfaction among the players, otherwise we wouldn’t have gotten to this point so quickly now,” Sermanni told SI.

“Perhaps because I’ve maybe changed things a little bit or changed some of the concepts around the team, I don’t know if players have been uncomfortable with that,” Sermanni told Fox Sports.

Gulati will address media on Monday at 4:30 p.m. ET, which could provide at least some clarity.

In the meantime, Jill Ellis will once again serve as interim head coach, as she did in fall 2012 when Pia Sundhage left to take the Sweden job. The U.S. and China play again on Thursday at 11 p.m. ET on NBCSN.