The message emanating from FC Kansas City camp has been clear: the system remains, the mentality must change.

In 2013 the Blues enthralled NWSL fans with their short-pass, possession style. But they also broke their fans’ hearts by surrendering leads on seven different occasions. That included the final game of the regular season when a stoppage time goal by Jen Hoy sank FC Kansas City’s bid to win the regular season. Six days later they became the first NWSL club to lose after leading by two goals, dropping a home playoff match to the Thorns, 3-2 in extra time.

“Not our favorite subject,” Leigh Ann Robinson acknowledged. “We obviously are good enough to play through those moments and I think we almost had some panic attacks and let the pressure kind of take hold. We need to make sure that we are not only good enough but smart enough to play out of that.”

We all walked off the field after those games saying ‘I cannot believe that happened.’ We really thought we were going to win those games. Usually when you feel that good and you’re playing that hard, karma kind of helps you out. That was one of the most puzzling things about last year. We didn’t expect to lose. That’s what made those ties and losses so crushing.”

Vlatko Andonovski, the coach who did a masterful job building the inaugural FC Kansas City squad, does not speak specifically about what things need to change in order to hold on to results in the last quarter hour. But there is no doubt the Macedonian-born coach is preaching mentality change.

“One thing that we’re definitely working on changing is the mentality,” Andonovski said. “Sometimes that takes a little bit longer than anything else, but it seems like the players are willing to change the mentality. Hopefully that will help us do better next year.”

Asked about how to coach end-game situations, Andonovski said it was more mental than physical. “I think that is more psychological than anything else. It is the mentality of the players. As a team we’re trying to change the mentality to play hard, attacking soccer and be painfully focused all the way through. (We cannot be) satisfied with little things. Not just throughout the game but throughout the season.

“As of right now I think the players understand the point and the direction that we want to go.”

One thing that will not change is the system. FC Kansas City lost Desiree Scott to Notts County leaving a huge void in midfield, but the coaching staff already seeds returning players helping the new players get up to speed on Andonovski’s system.

“I feel comfortable saying not just that we’re playing the same style but that we’re taking it to the next level,” the coach said. “It is because of the maturity of the players. Also, some of the players that we got came from similar environments.”

Robinson agrees. “That’s one of the first things that Vlatko implemented. We want to be a team that possesses it, but with a purpose. I definitely feel like the people that they drafted have that kind of (style). It has been a really smooth transition.”

No two players highlight the fruits of Andonovski’s system more than Lauren Holiday and Erika Tymrak. Holiday was the NWSL MVP in 2013 and Tymrak took Rookie of the Year honors. A year ago, few knew who Tymrak was but she quickly worked her way into the starting lineup and eventually into the consciousness of every NWSL observer.

“Sometimes you catch yourself ball watching and just watching them do their things which is kind of cool,” Robinson said. “They obviously have a very special connection. At the same time we have some girls who are definitely stepping up to the plate at the same time.”

The Blues also made moves to take some pressure off Holiday who scored a league-leading 12 goals which helped cover up the team’s deficiency at striker. To combat that the club dealt Kristie Mewis to Seattle (later traded to Boston) for Amy Rodriguez. They also picked up Liz Bogus and Sarah Hagen. Melissa Henderson is still in the fold and should fare better as a depth forward rather than as the lone striker.

“Amy Rodriguez is looking very good and we’re very excited to have her on the team,” Andonovski said of the former WPS No. 1 overall pick who took the 2013 season off to have a baby. “Not just because of the player she is, but as a person she brings experience and leadership to the team. I’m personally surprised how versatile she is and how she can handle different situations and different challenges on the field.”

Not only did Desiree Scott leave, Lauren Sesselman was taken by the Dash in the expansion draft leaving holes in defensive midfield and central defense. That leaves them with national team regular Nicole Barnhart in goal, and another in central defense, Becky Sauerbrunn. Robinson will play one of the outside back spots and will enter this season capped by the U.S. whereas she left the 2013 NWSL season without that distinction. Jen Buczkowski is unheralded in midfield.

The question will be whether Buczkowski plays by herself as a holding mid or whether Andonovski swaps someone in for Scott to make a defensive midfield pairing. One scenario could be letting tactical circumstances dictate the shape each week. If Buczkowski does get a partner it could be Jenna Richmond, the 16th overall pick in the draft.

Another rookie, 1st Round pick Kasey Kallman, could find herself starting in central defense with NWSL newcomer but women’s soccer veteran Nikki Phillips (nee Krzysik) also slotting in along the back line. New acquisition Amy LePeilbet is still rehabbing a knee injury and will not be ready for Opening Day.

Barnhart is a rock but Mexican allocation Cecilia Santiago is hurt which means there will be an inexperienced keeper in the first team when Barnhart makes her national team sojourns.

If Andonovski is really able to get his players to take the possession-with-a-purpose style to the next level it could be a long season for the rest of NWSL. More realistically there will be some adjustment period for a team that lost Desiree Scott, Lauren Sesselman, Kristie Mewis, and Courtney Jones. They will need some young players to contribute defensively and for the midfield to figure out how to find Amy Rodriguez in dangerous places to allow her to show off her goal scoring abilities. 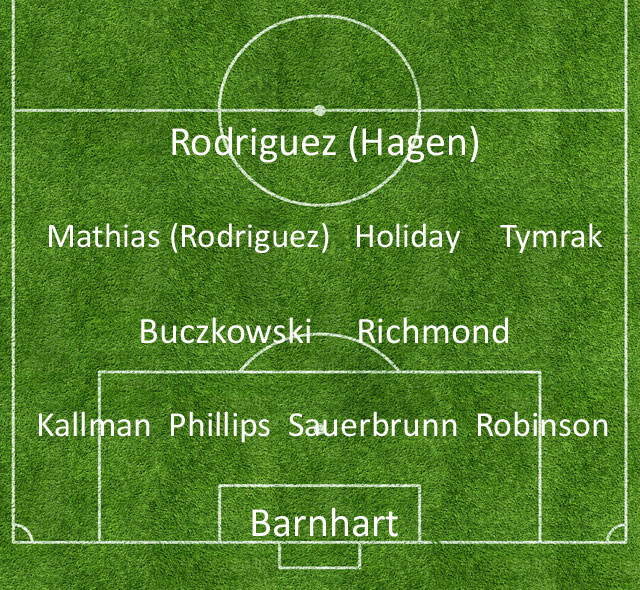