For the second year in a row, the Chicago Red Stars are preparing for the NWSL season without several of their key pieces. The difference this time around is they feel like they can compete with the players they have.

Some of those players are still weeks or months from joining the Red Stars. Christen Press will not be there as long as Tyresö is in the Champions League, which is at least until late April. Melissa Tancredi is finishing chiropractor school, and Shannon Boxx just had a baby. Dames hopes that by the time they get there it will prove difficult for them to crack the lineup.

“There has been no talk at all among the group about when (the missing players) come,” he said. “All the conversations have been about who we have, what we’re going to do, and how we’re going to be successful with what we have. If the group is playing well and the players are performing well then those girls will have to come in and earn their spots and move somebody out of a position.”

The players there now include 1st Round picks Julie Johnston and Vanessa DiBernardo. Johnston has been seeing time in central defense while DiBernardo has been in midfield.

“Good,” Dames said when asked how their first camp was going. “Vanessa is playing in the midfield so she is starting to form relationships with the players around her. We’ve predominantly used Johnston as a center back at this point and she’s been great. You can tell that she’s been in some (national team) camps. She has a different maturity level than a lot of the younger players that I’ve been around.”

Another new Red Star, acquired in a trade with the Thorns, is goalkeeper Karina LeBlanc. The Canadian international will replace her main competitor for the World Cup job, Erin McLeod, who was traded to Houston for Tancredi. LeBlanc’s name was the first one Dames mentioned when asked who was picking up the leadership slack for retired midfielder Leslie Osborne.

“KK (LeBlanc) has done great since she’s been in. She’s a very dynamic personality. She’s very experienced, very team oriented. Lori (Chalupny) has actually been more vocal than either of the previous two years that I’ve had her.”

The coach added that Michele Wenino and Jackie Santacaterina have also taken on leadership roles though the latter is working her way back to full fitness after offseason hip surgery.

Last season Chalupny spent too much time on the ground, something Dames attributes to both her style and the fact that she was the only creative player on the field too much of the time. This year the pieces look to be in place that will take some of the pressure off the newly-minted 30-year-old.

“I definitely think we have a lot more players around her this year that are going to alleviate a lot of the pressure,” Dames said.

DiBernardo is one player that could draw attention away from Chalupny. Another is last year’s No. 1 pick, Zakiya Bywaters. Word from Chicago is that Bywaters is healthy and playing well after her rookie season was torpedoed by injury. Adrianna Leon, acquired in an understated but effective trade with the Breakers last season, scored in Wednesday’s win against Notre Dame and is a threat to score in the league. Jen Hoy impressed as a rookie even though she missed the first part of the season to graduate and then picked up an injury after arriving.

“We’ll be a little bit different this year. We’re going to be able to do a few more things in the attack.”

The Red Stars have three key players scheduled to arrive in-season. They also have several injuries to deal with. Santacaterina played 30 minutes against Notre Dame and hopes to be ready for the opener. Taryn Hemmings (ACL) is training but isn’t yet ready to appear in a match and is a longshot to suit up when the regular season starts. Backup goalkeeper Taylor Vancil had a toe infection and has yet to see game action. Vancil is expected to be ready to back-up LeBlanc.

Tactically, the Red Stars have a chance to be very solid defensively, but they did not generate much in the way of attack from their back line. That could be an issue again in 2014. Even LeBlanc is not a particularly good distributor and often defers goal kicks to defenders.

Dames expects to add more experience to the roster throughout the season. He cited the Press, Tancredi, Boxx trio and also alluded to the club’s four international spots, none of which are currently filled. But the Red Stars are embracing their younger group and they will be asking them to do a bit more in 2014.

“The young players we had last year are a year older now and that helps out a lot,” Dames said. “And then we have a lot of young players in camp again. We think we have a better idea as a coaching staff of how to bring them along. I think we finished the year pretty good, at least from a results standpoint.

“I think year two we’re definitely going to be better off than we were year one. What that translates to as far as results, we’ll see. But we’re going to hold the players to a little bit of a higher level of expectation as far as trying to play a bit more as opposed to being very organized defensively and being very direct when we had the ball.”

The tale of the 2013 season was mostly told when they started 0-4-2. This team should be better, and better still when the full complement of players becomes available. But they’ll have to get off to a better start to have a chance at a playoff appearance. 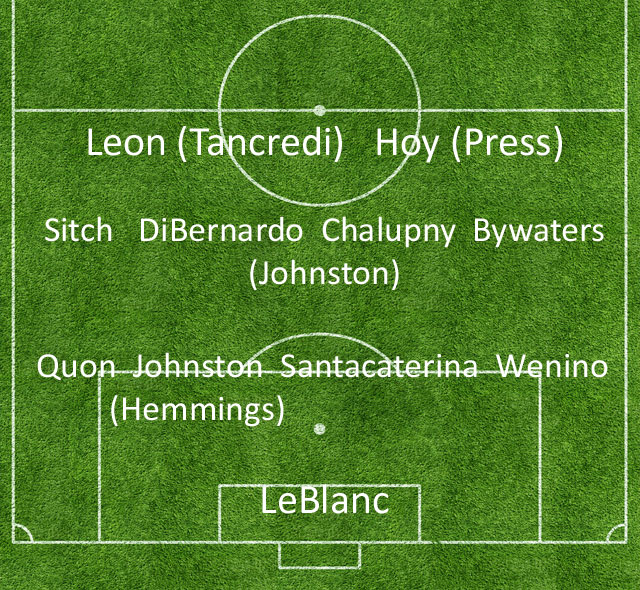 *Late additions will cause changes, as reflected by parentheses ( ).