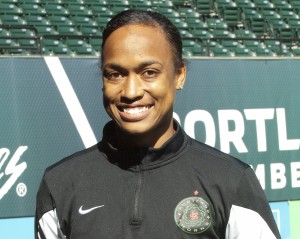 Jess McDonald made her case for playing time in Alex Morgan's absence with a pair of goals on Friday. (Photo Copyright Patricia Giobetti for The Equalizer)

TUCSON, Ariz. — In a preseason exhibition held in Tucson, Arizona on Friday, defending NWSL champions Portland Thorns dominated the University of Arizona’s Women’s Team in a 10-0 win before over 1,700 fans at the Kino Sports Complex.

The Thorns started quickly, scoring twice within the first six minutes on goals by Canadian international forward Christine Sinclair and midfielder Angie Kerr’s long-range blast from well outside the box—which was Portland’s fifth shot of the game at that point.

Portland had about 85 percent of the ball possession in the first half, utilizing German international goalkeeper Nadine Angerer essentially as a sweeper with two defenders flanking her—U.S. international Rachel Van Hollebeke and Nikki Marshall. Supporting them was former Bayern Munich defender Amber Brooks. Outside backs Rebecca Moros (left side) and trialist Courtney Niemiec (right side) from La Salle University essentially acted as traditional wingers, rarely having to track back into their defensive third.

“When we play, our fullbacks are very high [forward] and we’re defending with three—two center backs and a defensive mid,” Thorns coach Paul Riley said. “We still have to bring in [new signing and Australian international] Stephanie Catley; she’s a naturally lefty which will help us get down that side a bit more, and get higher.”

Riley will then move WPS and Japanese Nadeshiko League veteran Moros to the right wing, though he was pleased with trialist Courtney Niemiec’s work on the night. University of Arizona head coach Tony Amato admitted after the game that he does not encounter any college teams who play with attacking wingbacks like Portland does.

Riley further said: “We’re going to take risks in the back; Amber Brooks, Rachel Van Hollebeke, Nikki Marshall can handle the ball. I told them they are going to get pressure on them and force them to be better players. This year, I want them to take risks and be brave with the ball. The one thing we brought Nadine [Angerer—a German international and current FIFA World Player of the Year] in for was her feet and her aggressive thinking; tonight she was outside the box, she was high and that’s something that we needed to do.

“That’s the reason we made the change in goalkeeper and brought Nadine in,” Riley said, referring to the trade that sent Canadian goalkeeper Karina LeBlanc to Chicago. “We wanted a more aggressive goalkeeper with her feet. She was good tonight; because she could use her feet, it kept Rachel and Nikki in a good position to receive and start the attack and I think they did it really well tonight. For us, our shape, the game was perfect for a preseason game. Obviously we will have to get some pressure on us on the other end of the field.”

At forward, during the first half, Sinclair and former Seattle Reign forward Jessica McDonald combined well up top, fed by midfielders Allie Long, Sinead Farrelly and Kerr. Farrelly, who played with FC Kansas City last season, was a little more defensive-minded when needed. The Thorns’ style under Riley is ball control, with quick triangular play in the midfield, building up to support Sinclair and McDonald, as well as utilizing the wingers; last season under head coach Cindy Parlow-Cone, the team frequently played more long, high balls to the forwards. Halftime was a welcome relief to the Wildcats as they found themselves down 4-0, through further goals by Van Hollebeke in the 33rd minute and McDonald  in the 42nd minute.

The University of Arizona played a little better in the second half, but the goals kept coming for the Thorns — six, to be exact. Van Hollebeke and McDonald tallied second goals, while Allie Long and substitute Mana Shim also struck for braces. Portland ended the game 10-0 winners, with a 29-1 shot advantage, 20-0 for shots on goals and six corners to none for Arizona.

After the game, Riley was very pleased with the result.

“The players wanted to play against someone else rather than themselves. I was happy with the overall movement of the ball.”

U.S. international forward Alex Morgan was not in Tucson as she is still recovering from an ankle injury and Riley says she could be out until at least late May. Riley said that he is still looking for a partner for Canadian international forward Christine Sinclair, who he described as “one of the best finishers I have seen at any level, men or women or boys or girls included.”

His job this weekend is to find a “partner in crime for her” while Morgan is out. McDonald, a native of suburban Phoenix who played at the University of North Carolina, made a strong case for herself, according to Riley.

“I thought Jess came in and got two goals but her overall play was good,” he said. “Jess McDonald was an unknown thing for me coming in. She came from Seattle in a trade before I got there. We were talking about maybe trading her before the season. I wouldn’t trade her for the world right now. She’s come in preseason and done really well. She’s from Arizona; if she could play every game in Arizona, she would finish the league leading in scoring [joking]. That’s why we’re here, to find if Jess can play with Sinc, or Jackie [Acevedo] or Mana [Shim] can play with Sinc.”

Riley has signed another top quality international forward, in part to assist during Morgan’s absence, but could not yet announce the signing, describing her as a very creative and experienced attacking force. Morgan will come to the afternoon match Sunday against Arizona State University to sign autographs and be with her teammates.

Some have wondered why the Thorns went to Tucson for a week of training. Tucson, Ariz., a city of half a million people located an hour from the Mexican border, has become a major hotbed for soccer within the past three-four years. The FC Tucson ownership group, a PDL franchise, has established the city as a major preseason training center for Major League Soccer teams.

Pima County has invested heavily in soccer since the city lost three baseball spring training clubs (the Arizona Diamondbacks, Chicago White Sox and Colorado Rockies) to the Phoenix area and also saw two Pacific Coast League franchises relocate to other markets during the past few years. The FC Tucson ownership group has repeatedly delivered on their promises, putting together a top-shelf soccer organization and growing the game in a strategic, purposeful manner, which should be a blueprint for soccer franchises in small and medium sized markets. The women’s game Friday night drew 1,774, which exceeded last year’s average attendance for Sky Blue FC (1,677) and Chicago Red Stars (1,713).

The FC Tucson ownership group would like to have the Thorns back as well as other NWSL and international club teams in the future, perhaps conducting a women’s version of their Desert Diamond Cup that they stage for MLS clubs in the preseason. Nikki Marshall, the ex-University of Colorado and WPS veteran, felt that everything that the team needed in Tucson for training was tremendous.

“We are so grateful to have this, just being here,” she said. “The hotel and everything is awesome. It’s great to have a place to come during preseason that brings us all together, instead of being at home and all of us going our separate ways after training. We would love to come back.”

Tim Grainey is a contributor to Equalizer Soccer.  His latest book Beyond Bend it Like Beckham was released in 2012.

Riley: Morgan could be out until past Memorial Day
Tyresö books first ticket to UWCL semifinals