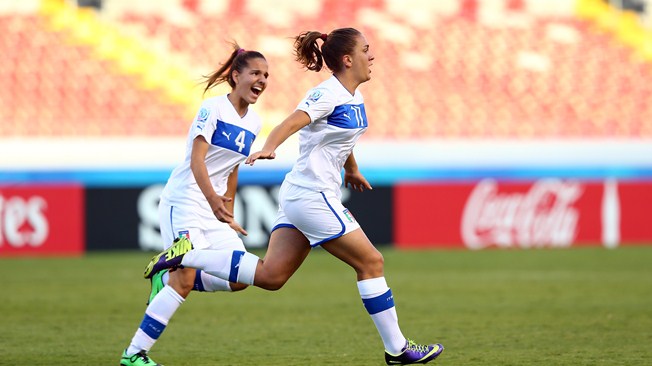 Italy are through to the U-17 FIFA Women’s World Cup semifinals in their first-ever appearance at the competition after defeating Ghana – third-place finishers in 2012 – in the quarterfinals on Thursday.

Ghana Ernestina Abambila scored a 90th minute equalizer to send the game straight to penalty kicks — no more extra time at the U-17 level, remember — but Ghana could not complete the comeback from the spot. Italy prevailed 4-3 on penalty kicks. Marta Vergani slotted home the winning penalty kick for the Italians, who will face Spain in Monday’s semifinals.

Jane Ayieyam opened the scoring for Ghana in just the 4th minute, but Gloria Marinelli answered four minutes later with an equalizer for Italy.

Japan took care of business as expected against Mexico with a 2-0 win that ensured no CONCACAF nations made the semifinals in Costa Rica after Canada surprisingly lost to Venezuela earlier in the evening.

Yui Hasegawa gave Japan the lead in the 12th minute and Hina Sugita doubled the advantage in the 44th minute on a rebound from a penalty kick. [CLICK HERE FOR HIGHLIGHTS]

With the victory, Japan — who look like title favorites entering the semifinal stage — will face Venezuela in Monday’s semifinal.

Patri Guijarro finished a penalty kick in the 14th minute and Nahikari Garcia doubled Spain’s lead in the 58th minute when she finished a ball over the top. Guijarro buried a tap-in goal on a rebound from a corner kick in the 71st minute to ice the game for Spain, who move on to face Italy in an all-European semifinal on Monday.

Venezuela shocked the favored Canadians, and a 14-year-old leads the tournament in goals. Click here for full match report.