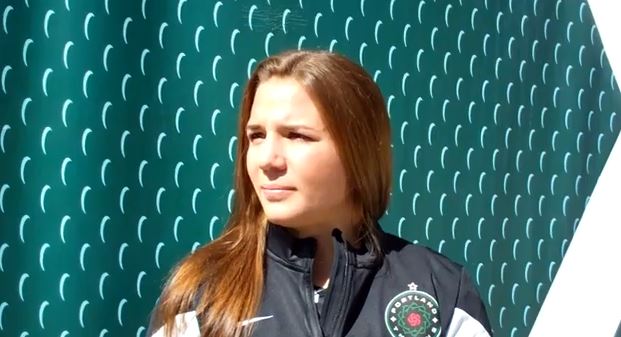 Amber Brooks is settling into Portland, where new head coach Paul Riley plans to implement rotating formations depending on matchups. Brooks will likely always play in the holding midfield role for the Thorns, taking over a spot filled by Becky Edwards for some of 2013 before she tore her ACL in June.

“Amber can spray the ball around like no other,” Riley said. “She’s one of the few players I’ve seen at the professional level that can hit a 40-yarder like Stevie Gerrard an land it point-blank, a yard away. She’s one of the few that can do that. I don’t know how many players in the world – female players – that can do that, but she can hit it. So obviously it’s a luxury item in that defensive mid.”

Brooks played for Bayern Munich for a year, but decided to come play for the Thorns — who drafted her in 2013 and owned her NWSL rights — in order to more easily be seen by U.S. coach Tom Sermanni and his staff ahead of 2015 World Cup qualifying. Brooks maintains that there was no pressure from U.S. Soccer to return home, a subject that came front and center when she decided to leave Germany and that really boiled over upon Christen Press saying U.S. Soccer wanted her in the NWSL.

“No, there was absolutely no pressure,” she said. “I had a very open conversation with Sermanni about it and we talked about both the pros and cons. He didn’t feel one way or the other and left it completely up to me.”

See the video above for the full interview from Thorns media day, courtesy of our reporter, Patricia Giobetti.