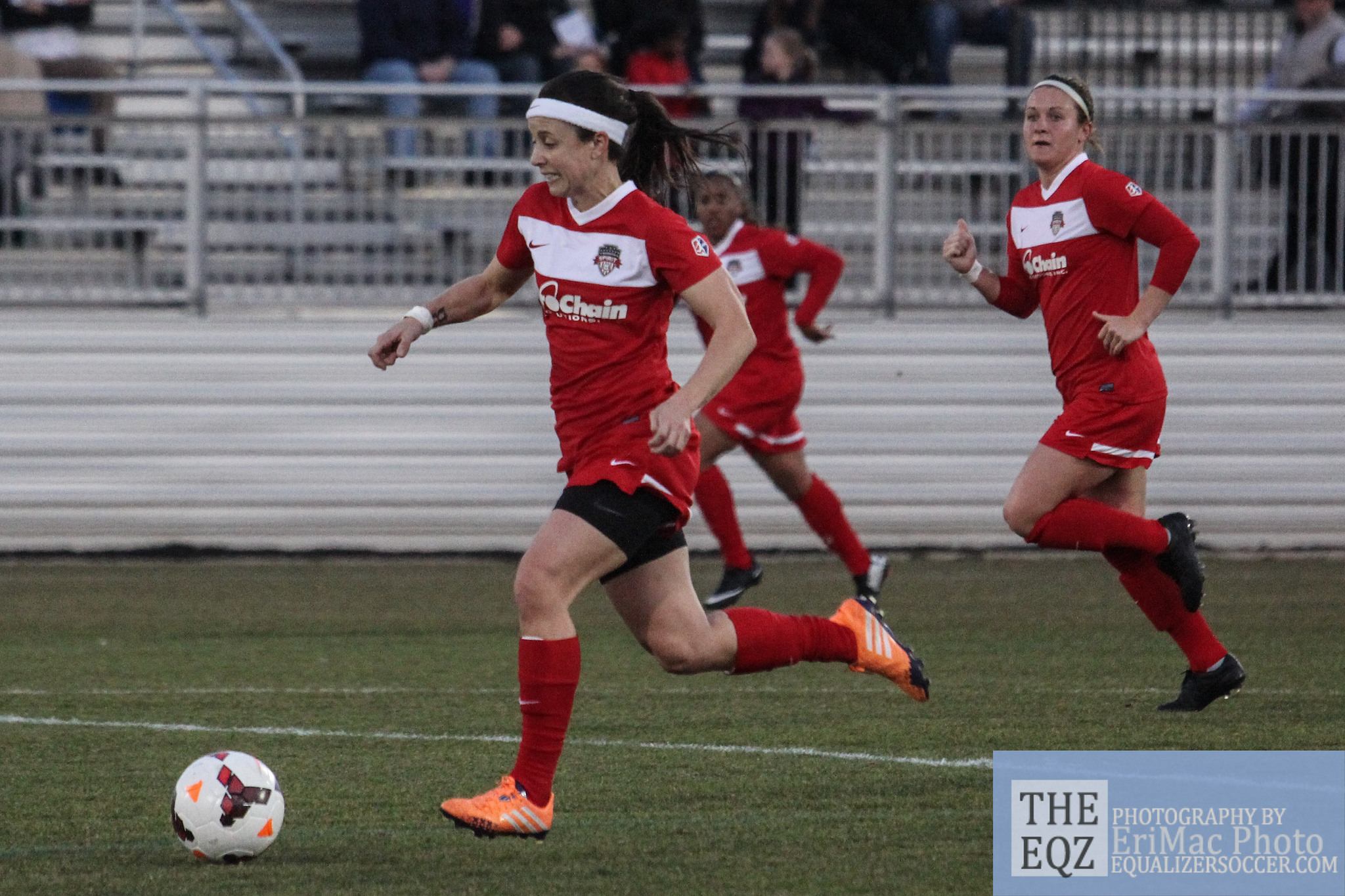 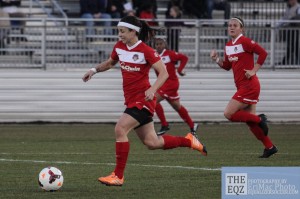 Tiffany Weimer scored for the Spirit in a 2-0 win over UNC on Saturday. (Photo Copyright Erica McCaulley for The Equalizer)

Nearly a year after beating the University of North Carolina 2-0 in preseason, the new-look Washington Spirit beat the visiting Tar Heels by the same scoreline Saturday night. The Spirit notched both goals in the second half, the first coming from Diana Matheson and the second from Tiffany Weimer.

Matheson’s strike came in the 69th minute when she beat a UNC defender and sent a weak ball in. The ball hit Tar Heels’ keeper Lindsey Harris’ gloves and went in. Twenty minutes later, Weimer doubled the lead. Matheson sent a cross into Weimer, whose shot hit the keeper, bounced off the post and in.

Although the scoreline was the same, Saturday’s match was very different from the one played a year ago. The Tar Heels’ looked much different as many players finished their playing careers last fall. For Washington, the game featured an integration of new players into the roster and the implementation of coach Mark Parsons’ tactics and ideas.

Postgame, Parsons said he was happy with the team’s performance given the stage of the preseason they’re in currently.

“Technically we broke down a lot,” he said. “Sometimes the movement and timing wasn’t linked in with what we’ve tried to do. The biggest positive is concepts and ideas that we’ve been trying to look at, we could see them being attempted… Now, if we played anything like that in three weeks, it’d be a nightmare.”

Tactically, the Spirit played fluidly. Although, the team lined up in a 4-3-3, the positioning of the players changed considerably depending on which team had the ball and where. The goal scorers, Weimer and Matheson, played out wide at times in addition to their traditional central roles. “(W)e’re going to be flexible, we’re gonna be adaptable and we’re also going to be unpredictable,” Parsons said when describing the formation.

“Mark’s created an environment where we have our setup and our philosophy, but we do have the freedom to play the way we want, to play to our strengths,” Weimer said.

Last year, the Spirit were much more reliant on the counterattack and the long ball. While the team wasn’t efficient in their attacking half, Washington was connecting passes and maintaining possession in Saturday’s match. UNC’s defense was very well organized and made difficult for the Spirit to penetrate the third final.

Parsons praised UNC’s physical fitness, saying that the match was a good test for the Spirit and showed him how far the team needs to come fitness wise before opening day.

“We knew they were going to come out 100 miles per hour and be a great organized team,” Parsons said. “I thought they were superb on the ball. They made us run and work off the ball in the first half.”

In the second half, the Spirit looked more dangerous and a goal seemed inevitable. Yael Averbuch had an excellent opportunity to score in the 55th minute when Lori Lindsey played a cross to her but Averbuch botched the volley that almost certainly would have been a goal.

In latter stages of the game, Jodie Taylor was wide open after Cecilie Sandvej sent a cleared corner kick into the area. Taylor hesitated a bit, thinking she was offside, which allowed UNC’s keeper to make a phenomenal save on the ensuing shot.

The state of the squad

Parsons admitted he has “a bit of a roster problem,” meaning he’s got so much talent that’s it is going to be hard to trim the team down to the final 20. He’s been impressed with trialists Bianca Sierra and Meg Morris and he hopes he can get them in to the final squad.

Last week, Morris was the top performer in the team’s fitness test. “(S)he’s one of the fastest players we’ve got, she can jump the highest, she can run the longest. She’s an absolute athlete,” Parsons said of Morris. This is an interesting revelation, as Morris often played a super-sub role at UNC, leading many to question her stamina.

Parsons called Sierra “the player of the match” Saturday night, adding that “She played at left back and she doesn’t ever play there, and she had more rotational movement and tactical understanding than any other player on the team.”

Washington Spirit draftee Shasta Fisher decided to leave the team on Wednesday. Parsons stated that Fisher had “chosen to take a bit of a different path.” He added that the door has been left open for a possible return.

It seems as though Parsons has some tough decisions to make in the next couple of weeks, but given the problems Washington’s faced in the last year, it’s a good problem to have.