Japan thrash Paraguay for 10 goals at U-17 WWC 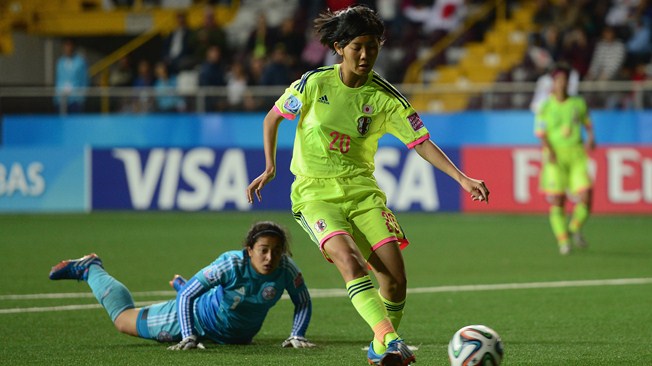 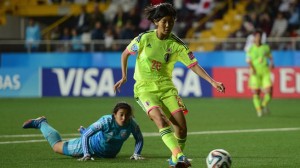 Japan rolled to a 10-0 win over Paraguay to advance to the quarterfinals. (Photo: FIFA.com/Getty Images)

Japan announced their intent to do serious damage at the 2014 FIFA U-17 Women’s World Cup, picking apart Paraguay for 10 goals on Wednesday to clinch a berth in the quarterfinals.

Hina Sugita scored a hat trick in just 11 minutes in the second half, but the damage was already done by then as seven other players scored a goal apiece in the rout. The 10-0 victory was the third-largest in the competitions history. Click here for highlights.

Colombia managed to end its 290-minute goalless streak in the competition when Angie Rodriguez scored on a looping header in just the 3rd minute, but Joy Bokiri equalized 23 minutes later for Nigeria with a stunning free kick and Uchenna Kanu hit the game-winner in the 59th minute for a 2-1 victory. Click here for highlights.

Spain also jumped out to a lead three minutes into their match against New Zealand. Sandra Hernandez scored on a half-volley and Pliar Garrote added another precise strike 31 minutes later for Spain. Nahikari Garcia iced the 3-0 win with a goal in the 67th minute. Click here for highlights.

Ghana, Italy and Venezuela booked their spots in the quarterfinals on Tuesday, leaving two open spots to play for on the weekend.

The challenging Group B still needs a second-place finisher, as does Group C. Ghana has clinched first in the Group of Death, Group B, while Canada have 2 pts. from two games and Germany and North Korea are all on 1 pt. On Saturday, Canada face Ghana and Germany take on North Korea in what promises to be a thrilling finale to the group stage.

Meanwhile, Spain is in the driver’s seat for second place in Group C after their win on Wednesday. They have 3 pts., behind Japan’s six, but New Zealand and Paraguay are still alive with a point each. Paraguay take on Spain and New Zealand face the daunting task of beating Japan on Sunday, the final day of group play.