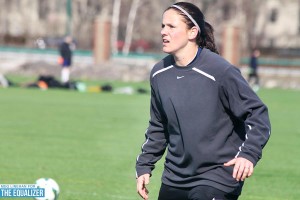 Cat Whitehill will likely be looking for a new central defense partner this season (Photo copyright Meg Linehan for www.womens.soccerly.com)

The NWSL preseason is already more than a week old and clubs were required to reduce rosters to 25 on Monday. There is also a plethora of news as we have learned of several players who will not be on the field this season and another who suffered a season-ending injury before training camp had gotten rolling.

Here are some key questions facing each of the nine NWSL clubs.

Boston Breakers: Who plays next to Cat?

As first reported by The Equalizer, Kia McNeill is not in Breakers’ camp at the moment and is not likely to play this season. And there are not many options at the moment for what looks like a long-term fix. Kaylyn Kyle played some center back in Seattle last season, but was better in midfield and the Breakers were adamant upon acquiring her that it would be to play in the middle. Bianca D’Agostino is regarded as versatile but central defense is not considered part of her repertoire. Stay tuned.

The Breakers also have a scoring deficit after trading Sydney Leroux to Seattle. They will be hoping to make up her 11 goals through a combination that includes Lisa De Vanna, Melissa Ortiz, and 1st Round pick Nkem Ezurike.

In goal it appears 4th Round pick Jami Kranich has already beaten out trialists Victoria Christ and Kimika Forbes for the job backing up Alyssa Naeher.

The Red Stars are going to be much better this season than they were last—eventually. The following caveats apply: Taryn Hemmings, Amy LePeilbet, and Jackie Santacaterina are all coming off surgery. Julie Johnston and Vanessa DiBernardo are both rookies. Christen Press is staying at Tyreso as long as they stay afloat in the Champions League, maybe as late as June. Leslie Osborne retired last week. Shannon Boxx is pregnant.

So how will the Red Stars fare while these matters work themselves out? The keys figure to be how quickly Johnston and DiBernardo acclimate and whether players like Jen Hoy and Julianne Stich can pick up where they left off at the end of 2013.

Another x-factor is Zakiya Bywaters, the No. 1 overall pick in 2013. Bywaters came out of school a bit raw and took an injury before she had a chance to settle in at the pro level.

FC Kansas City: Can they play the same style?

FC Kansas City did not emerge from the first NWSL season with a trophy, but in some ways they were the most impressive team in the league. They hired a coach (Vlatko Andonovski) who wanted to play a certain system, he brought in players who fit the bill, and they played some magical soccer through much of the summer. Their first offseason has not gone as well.

Notably, Desiree Scott left for Notts County after a protracted battle over her contract status. Not only is Scott a world-class midfielder, her absence could force Andonovski to veer from his dual-defensive midfield formation.

FC Kansas City will also be looking to generate more offense from the striker position. Amy Rodriguez was brought in to fill that void. She did not play last season due to maternity leave. Interestingly, the club lists her as a midfielder on its latest roster.

Houston Dash: Building the proper culture and bridging the gaps

One of the most important elements of a first-year expansion club is laying the foundation of a culture that will create positive results for years to come. The Dash seem to be doing a pretty good job of that so far, but now comes the work of building a winning culture in the locker room and on the pitch. Head coach Randy Waldrum has plenty of high-character players to work with in this quest.

No matter the culture, a team needs good players to win. The Dash have done a nice job building their roster, but two things stand out right now. First, Whitney Engen is still in Sweden and could be until as late as June. She will eventually be the club’s best defender, but they will have to find not one but two central defense replacements in the interim. Lauren Sesselmann has a torn ACL and will not play this season.

The forward core is also an issue in Houston. Waldrum has put together a bit of a mish-mosh of strikers from Ella Masar to Stephanie Ochs to Tiffany McCarty. All have some potential, but none have scored consistently at this level. Teresa Noyola is also an attacking threat, now with her third NWSL club.

It is difficult to remember a situation in sports quite like this one. The Thorns won the inaugural NWSL Championship, but the coaching change from Cindy Parlow Cone to Paul Riley was greeted with near unanimous praise. Few know how Cone ran her side because the club maintained a covert operation in 2013. Riley likes to chat, and he also likes to run his players ragged in training camp in an effort to maintain the fitness edge throughout the season. He is also prone to making lineup adjustments based on opponents and whatever tactics he feels are needed to win a particular match. That said, Riley was the underdog when he coached the Philadelphia Independence and there will be immediate and immense expectations waiting for him in Portland.

From a soccer perspective, it is becoming clear that the Thorns will at least open the season without Alex Morgan, who has been hobbled since October and recently refused to put a timeline on her return. That will leave Christine Sinclair as the main goal-scoring threat although much of what should be a crowded but very good midfield should be able to score from time to time. The other Thorns forwards are Jessica McDonald and Mexican allocation Jackie Acevedo, who could be leaned on heavily early. So there could be considerable pressure on Sincalair who has been on the championship side the last three years there was top-flight women’s soccer in the United States.

Seattle Reign FC: How will it all work?

There is no doubt the Reign put together a team that has enough talent to win the league. The question now is how it will all fit together, particularly on defense. There is more than enough personnel to make a strong back four, but who will anchor it? Stephanie Cox figures to start on the left side and Kiersten Dallstream and Elli Reed both played well at times on the right side last year. Will the center backs be Lauren Barnes and Amanda Frisbie? The latter is fresh out of school but looks to have all the tools.

In goal, is Hope Solo ready to be a steady force each week? A better supporting cast should help. Solo, though, figures to miss significant time with the U.S. so finding a suitable backup will be important. The leading candidate is Haley Kopmeyer, who surrendered three goals in her lone start as a rookie but also stopped a penalty kick.

If the Reign stay healthy and click early they could well be the team to beat.

Monica Ocampo will be called on to be a scoring force for Sky Blue this season. (Photo Copyright Meg Linehan for The Equalizer)

Sky Blue FC: Who will score?

Lisa De Vanna is far from a pure goal scorer, but she was a constant threat for Sky Blue last season. Her recent trade to the Breakers has left Sky Blue FC vulnerable up top. Monica Ocampo was a boon for the club in 2013 scoring eight goals in only 901 minutes. She could well be called on to produce more over more minutes this season.

Maya Hayes, the club’s 1st Round pick, is expected to be a scorer, but it is a tall task to do so consistently straight out of college. Another option is a healthy Kelley O’Hara who figures to fit best in an attacking role after Sky Blue was able to retain their entire back line from last season. Sophie Schmidt can score out of the midfield, but was not as effective during a few stints at striker.

The De Vanna trade yielded an international roster spot, meaning Sky Blue has two to work with. So don’t be surprised if they wind up bringing someone—or two—in before too long. Until then they will be looking for an unknown to emerge and will have to be a mighty steady defensive group.

The Spirit drafted Crystal Dunn to help lead the team from the bottom of the table to the top. The question now is about where she will play. Coach Mark Parsons said after he drafted her that he wanted to use her wherever she would make the most impact. That likely means somewhere other than left back, where she is more than capable and would attack better than any of her counterparts around the league.

Another question for the Spirit is whether Yael Averbuch and Jordan Angeli can boss opposing midfields as reports indicate they did during an intrasquad on the weekend. Averbuch is more or less a known commodity, but Angeli is trying to make the club after missing three seasons with a knee injury. Before she tore her ACL on Opening Night of the 2011 WPS season, Angeli was on a line for at least a shot at in the international level.

Not much went right for the Spirit in 2013 so Parsons will be in a similar position as Randy Waldrum—trying to instill the culture needed to win consistently.

The biggest news of the preseason so far is the ACL injury to Adrianna Franch. The second-year keeper tore the ligament in her right knee and will require season-ending surgery. But the loss of Franch is just the tip of the iceberg for a team that had excellent consistency in the back line and in goal last season. Sarah Huffman and Estelle Johnson are both absent from camp and Flash coach Aaran Lines told The Equalizer this week that he does not expect either to play this season (no reason was given). Alex Sahlen is pregnant and has been waived by the club.

Lines did a masterful job of building a back line last season, and if the Flash are to remain atop the table he will have to do it all over again. Central defender Brittany Taylor and outside back Katherine Reynolds will be the only two returnees from the back four plus keeper.

When camp opened the only keeper on the roster besides Franch was Kelsey Wys, the 18th overall pick from Florida State. Franch was a rookie in 2013 and wound up starting every match and posting a league-leading 0.91 goals against average. Can Wys do the same? Like Franch she was the first keeper taken in the draft, but Franch was more of the exception than the rule. Goalkeepers are rarely good enough to jump from college to professional starter in one season. Arianna Criscione, most recently of Torres CF in Italy, has been brought in to challenge Wys. As of now those are the Flash keepers for the season. Who plays outside back and next to Taylor in the middle? We’ll find out soon enough.