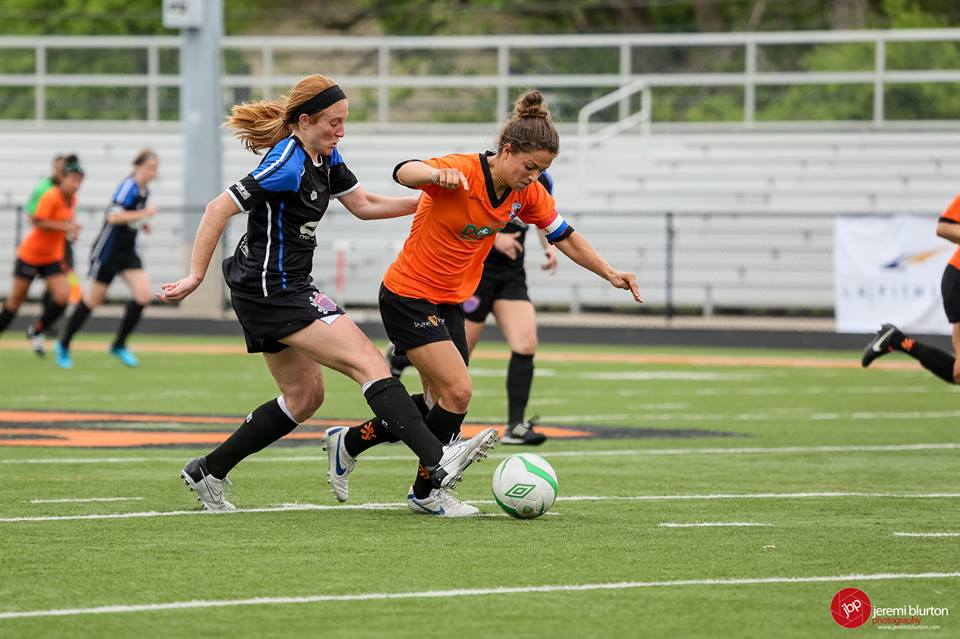 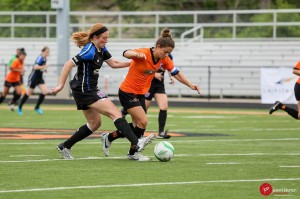 Emilie Fillion is a native Canadian who played for the Maple Leafs at the youth national team level and with the Laval Comets in the USL W-League. Like many players from north of the 49th Parallel, she came to the U.S. for college, attending Wright State University in Dayton, Ohio.

While in Dayton, she played the past two summers for the Dayton Dutch Lions in the USL W-League, captaining the side from the back. The Dutch Lions had their best season in 2013, making the playoffs for the first time ever as Southeastern Conference Champions with 18 points from 10 games. Fillion scored a late goal in their 2-1 playoff loss to Carolina Elite Cobras. Considering that the Dutch Lions had zero wins and only three ties in 12 matches in 2012 (their second season in the W-League), the 2013 season was a tremendous success. The Dutch Lions, who joined the men’s Premier Development League of the United Soccer Leagues in 2009 before moving up to USL Pro a year later, have recently signed a partnership agreement with MLS’ Columbus Crew.

Fillion has benefited from another partnership that the Dutch Lions have, with FC Twente in the Netherlands. Fillion signed with Twente FC, the 2012-13 champions of the BeNe League—the joint country league with seven teams from the Netherlands and seven from neighbors Belgium. In 2014, the BeNe league is run as a traditional home and away league format among all the teams. Last season, the BeNe’s first, clubs played the first round within their own nation—playing the other seven on a home-and-away basis–and then the top four from each nation qualified for a 14-game BeNe A division, with the bottom four playing in the BeNe B Division. Twente currently sits atop of the BeNe League with 41 points on a 13-2-3 (W-T-L) record; tied with Belgium’s Standard Liege, who have one game in hand and one point ahead of Dutch side Ajax. Twente jumped from third after defeating Ajax 1-0 away on March 28th.

“Having Emilie signing a professional contract with our partner club FC Twente is great not just for Emilie but also for the club and our women’s program,” Dutch Lions Technical Director Sid van Druenen, who coached the women’s side in 2013, commented on Fillion’s move oversees. “Playing for the Dayton Dutch Lions FC will give players the opportunity to develop towards the dream of playing professional soccer and I am sure Emilie will do well in European professional soccer. She is a very determined and strong player with the ability to decide games not only by scoring decisive goals but also with a tremendous work rate and team spirit.”

Dutch Lions president Mike Mossel was also pleased with Fillion’s move and saw it as the beginning of a process to help their players advance to the professional ranks.

“This is exactly what we set out to accomplish when we started the Dayton Dutch Lions FC four years ago: give players a chance to become professional players, either in the USA or (even better) in Europe,” Mossel said. “And FC Twente is not just a team; Emilie will soon find out that this is one of the top organizations in Europe when it comes to soccer. Their women’s program is very well structured and marketed. Due to her determination and scoring ability I am sure she will contribute to the team and do very well like she did for us. I am really excited for her and wish her all the best”.

Fillion slotted in right away, playing in a 5-0 Cup victory over PCL less than a week after arriving, followed by a 1-0 loss to league leaders Standard Liege. Fillion provided The Equalizer with her initial impressions of the differences in play between the Northern Europeans and North American.

“The style of play is very tactical and requires a high level of technical skills,” she said. “The girls move the ball around really fast and they are always running and interchanging positions, which we do not see often in America. The team here is all about controlling the ball until the right moment to go forward comes, instead of just kicking it forward and basing the game on the players with more physical abilities. They try to build up and possess a lot more than most American teams, but they also have very talented players that are used to that style of play.”

Fillion felt that her two seasons with Dayton’s Dutch-centric club helped greatly in her transition.

“Playing for Dayton definitely set the tone for how Dutch people like to play and the positioning on the field also helped,” she said. “The mentality they try to install is similar and the training exercises have the same purpose as the ones we do here [in the Netherlands].”

Fillion is one of three Americans playing in the BeNe League this season: Whitney Sharpe is a 24-year-old defender from Des Moines, Iowa, who played college soccer at Loyola Marymount of California and is with Ajax of the Netherlands. Brittany Persaud of Telstar of the Netherlands also went to college at Wright State and is a dual citizen of the U.S. and Guyana. She played for Guyana during the 2010 CONCACAF Gold Cup tournament. The Dutch and Belgium teams in the BeNe League this season use players primarily from those two countries, along with a few from France, one from Morocco and Israeli goalkeeper Mairav Shamir, who plays with Persaud at Telsar.

Fillion’s contract expires in June, at the end of FC Twente’s season. She likes the club so far and staying in the country is her first option.

“I’d like to stay in Europe because I enjoy the style of play a lot more and I believe I can grow as a player much more since I have already played in America for so long…. I wanted to come to Europe for the style of play and the different experience I was going to get, on and off the field, to grow as a player but also as a person.” For longer term plans, Fillion plans to “keep playing for a couple years, depending on how everything goes of course, but then I would probably go back to school to pursue a career in psychology, probably something related to sports/athletes.”

This pipeline that Dayton has established with FC Twente opens up possibilities for good W-League players to expand their game and learn about other cultures. Especially with their success last season, the club could soon become a destination franchise within the W-League, with players from all over the country wanting to join the Southern Ohio club as a possible gateway to Europe. The Dutch Lions intend to send another player on loan to Twente later this year. It will be interesting to see if other W-League or WPSL teams pursue working agreements with European clubs, but the Dutch Lions have a definite working model to closely watch in the years to come.

Tim Grainey is a contributor to Equalizer Soccer.  His latest book Beyond Bend it Like Beckham was released in 2012.

Germany fights back, draw Canada at U-17 WWC
Mexico, Nigeria, Japan all win U-17 WWC openers