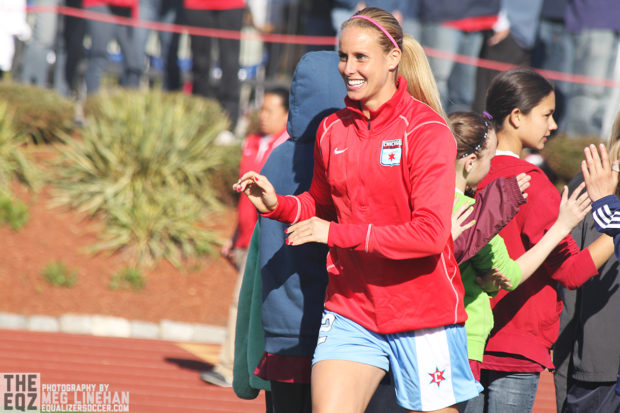 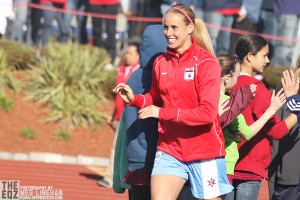 In 2008, Leslie Osborne tore up her knee and ankle. Doctors told her she would not play again. She made it back and played five more years.  On Tuesday, Osborne turned the tables, announcing her retirement from soccer, and closing the door on more years of what was already an excellent career.

“The last five years have been kind of an absolute blessing because I didn’t think I would ever play again,” Osborne told The Equalizer Monday afternoon. “So they are bonus years for me.”

In her heart, Osborne knew that when the Red Stars season ended last August that she had played her final game. But she sat on it to make sure. It looked more likely at the end of December when she moved to California to pursue opportunities at her alma mater, Santa Clara University. And in recent days she began informing friends, fellow players, and finally making it official with the Red Stars.

“I’ve been preparing for my next step in life the last three years,” Osborne, 30, said. “I have a really great opportunity in front of me. That’s why I moved back to the Bay Area.”

Osborne’s moving on to become an associate athletic director at Santa Clara. She first interviewed for the job last May but was not about to leave the Red Stars in the middle of the season. “I don’t want to be somewhere and not give 100 percent of my heart and everything I have when I’m doing something.” She finally went to work at Santa Clara in late December and hopes to make it a permanent thing.

“It’s exciting. I’ve always wanted to come back here. I didn’t want to coach, but I always wanted to be involved with athletics. I want to help run programs. I will be heavily involved in leadership programs at Santa Clara and helping with corporate sponsorship and helping the athletic department with fundraising. I’ll be able to do a bunch of different things, which is really exciting.

“With all that said, it’s a difficult decision to end an amazing chapter in my life. But I’m really excited for the next step and I want to end on a high. I can’t afford to go through another career or season ending injury.”

The Red Stars were perhaps the unluckiest team in NWSL last season. From a poor allocation to injuries in all parts of the season, the club scuffled early and grinded out a .500 season. This year they were allocated Christen Press, are getting Amy LePeilbet back from a knee injury, and drafted Julie Johnston and Vanessa DiBernardo in the 1st Round. As tempting as it was to hang around for what could be a breakthrough season in Chicago, the opportunity at Santa Clara proved too good to pass up for Osborne.

“We didn’t have a strong year,” she mused. “Rory (Dames, head coach) and (Lori Chalupny) and I did a good job of taking that group and making the most out of that group. To have the no-names on our roster and to have no national team players, and to do what we did was pretty special. Now that Christen Press and (Karina LeBlanc) and Amy LePeilbet and all these players are coming back and Julie Johnston from Santa Clara, they’re going to be really good. I’m really excited for them.”

Excited, but a bit disappointed to miss out on playing with Press, who was allocated to Chicago, and LeBlanc, who wound up there via trade. When the national team was in Dallas, Osborne informed Press she might not be coming back to the Red Stars. It was tougher to tell LeBlanc since she and Osborne have long dreamed of playing together.

“I had that conversation with KK a few weeks ago and she was pretty bummed that I wasn’t coming back. Her and I have been dreaming about playing together for a long time. It’s hard for me to not want to end my career playing with her. Those are players I would have loved, loved, loved to have played with. They are going to make that program even stronger. It is tough to walk away.”

Tough, but the right time. Osborne’s boyfriend, former MLS player Ricky Lewis, is now with her in Northern California. The Milwaukee native has her post-soccer life all laid out in front of her. And she has some of the most esteemed members of the U.S. national team to thank for her outlook.

“Kristine Lilly, and Brandi Chastain, and Julie Foudy, they changed my life,” Osborne said. “They changed my perspective and they helped me realize there is so much more than playing soccer and what I do on the field. They inspired me to help the game grow and give more of an opportunity for more young girls to play professionally.”

Osborne came into the world in 1983, eight years before the inaugural Women’s World Cup. Not only was she too young to remember it, she had not even begun playing soccer yet. That happened at 10, and eight years after that she was a freshman at Santa Clara when the Broncos won the national championship. But it was Osborne’s junior season that altered the face of her career forever. That was when coach Jerry Smith moved her to defensive midfield.

“I played so many positions anyway that I was like—that’s a bummer I’m not going to be up top anymore. I was more nervous that I wouldn’t step up for the team than anything. But I fell in love with the position and I played it from when I was 20 to 30 years old. Ten years.

“That became my position. I loved it. It’s like the quarterback. You dictate the play. You dictate the possession. You kind of run the midfield. Greg Ryan and April Heinrichs really liked the way I played that position and that’s why I got the opportunity with the national team.”

But when Pia Sundhage took over, she brought with her a philosophy that did not include a traditional, holding midfielder. And that is about where Osborne’s international career ended, at sixty-one appearances that started in 2004.  Osborne doesn’t hold any hard feelings though. Her advice to young players is to familiarize themselves with as many positions as possible.

“The reason I made the national teams at so many levels is because I could play so many positions.”

She also said she is thankful for Tony DiCicco bringing her to Boston to play with the Breakers, and to Dames for his coaching in 2013 with the Red Stars.

As the NWSL preseason kicks off, Osborne won’t be lacing up her boots in Chicago, regardless of the position. Her soccer career is complete. She has received many offers to play recreational soccer in the Bay Area, but has not touched a soccer ball since August. It is time to move on.

“I feel like I can walk away and be very happy with what I’ve done with my career. I have so many memories. I traveled to over 25 countries and played with my mentors and best friends. They’re such special memories that they’ll never go away.”