The long offseason: NWSL players team up, get creative to stay in shape during winter stretch

Before dawn breaks over Boulder, Colo., Nikki Marshall and Ella Masar are in the gym. It’s an early wakeup, but Marshall has to start working her day job by 8 a.m.

Around 5 p.m. the two professionals embark on their second session of the day, this time focusing more on their technical work. In between the two workouts, Marshall sells software and manages regional clients. Sometimes she works remotely, keeping Masar – who is one of her opponents on the field – company during the day.

Such is life for players in the NWSL, in which the dormant months outnumber the in-season ones on the calendar, and offseason training options are limited even for some of the best players in the world.

The season runs only from early April to the last weekend of August. When 2014 training camps begin on Monday, it will have been over six months since Portland Thorns FC defeated the Western New York Flash to win the inaugural league title.

Having gone through the grind for four years as a pro and watching one league fold, Marshall says she was “85 percent” sure she would retire from the game in September at 25 years old. She had just been waived after winning a championship with Portland in a salary cap move.

But the phone rang one day while she was sitting in her cubicle; it was Masar, and she was coming to Colorado to stay with Marshall and train during the offseason.

Marshall was sold. She would come back, and to Portland, where she was waived in a cap move despite starting every game.  She was then picked up by Washington, traded to Seattle and traded back to Portland all in two months.

“This is the first time that I can really say I have someone holding me accountable every day,” Marshall said.

“Training on your own, one is not as good and two, it’s tough to find that motivation. Even if you are doing the exact same thing, when you have teammates of that caliber training with you, it makes a huge difference.”

Masar needed that too. This winter was another in which she changed locations, something she has done regularly to keep fit and in form in the offseason. That meant going to France to play for PSG in the 2011-12 season. This time it meant bunking up with Marshall in snowy Colorado for daily two-a-days, killing time at Whole Foods or training youth players and coaching during the day – whatever it takes.

“For me this is like an all or nothing,” Masar said. “This next year is a big deal for me and I didn’t really know what I was going to get myself into. Even though this week we’ve gotten up at 5:30 every day to train, I don’t want any regrets.”

My new workout partner for the next month… Gotta love trying to catch THE @MarshallNikki17 #ouchcharlie pic.twitter.com/3RsV17yhfO

About an hour south of Boulder, Jordan Angeli is rehabbing her left ACL for the third time.

She hasn’t played professionally since 2011, when her sophomore season with the Boston Breakers lasted only 29 minutes. After scoring 18 minutes into Boston’s season opener against the Atlanta Beat, Angeli went down hard, tearing her left ACL.

Angeli would get her bone grafted before receiving a more surgery five months later. By 2012, there was no league to come back to following the collapse of WPS, and a flare-up in her right knee in 2013 kept her from seeing the field in the NWSL’s first season.

“Every month was needed,” she said. “I don’t think I would have been able to play this last season and play to an ability that I would have felt comfortable with.” 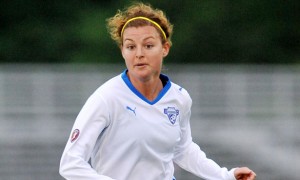 Jordan Angeli could play professionally in 2014 for the first time in three years.

The plan is to show up to camp with the Washington Spirit and make the team, but Angeli is keeping the pressure off herself, knowing the fit must be right for both parties. Aside from some training sessions with the Spirit toward the end of the 2013 season, Angeli has been on her own much of the last three years.

But this winter, she has been able to train with some local professionals – Major League Soccer’s Colorado Rapids are close by in Commerce City – and with some older boys teams from the Colorado Rush, the club she played for growing up.

Angeli didn’t cross paths much with Marshall and Masar, but she did recently join Chicago Red Stars defender Taryn Hemmings – who is still recovering from an ACL tear of her own last summer – in Arizona for some fitness training.

“The past three years it’s been pretty much just me trying to motivate myself, so to be in a group setting and a team setting has been really helpful for me,” Angeli said.

Angeli did spend some time with U.S. women’s national team defender Becky Sauerbrunn, who was occasionally in Colorado this winter before recently moving to Portland.

‘Offseason’ isn’t a word in Sauerbrunn’s vocabulary. She stays busy year-round as a national team regular, but there are down moments between training camps in the winter months. So Sauerbrunn spent time training with Angeli and then with Marshall and Masar between the United States’ December and January camps.

Sauerbrunn saw the benefits: More confidence going into camp, and knowing that she had continued to train at a high level even when away from her U.S. teammates.

“Every player is different as far as what they do when they are not in national team camp,” Sauerbrunn said. “Some people focus on fitness, some people focus on soccer. For me, I want to focus on both, so that when I come into camp I feel both played in and I feel fit.”

Colorado’s pocket of NWSL players is a microcosm for those around the league: The challenges and goals are similar. Marshall juggles her day job and post-soccer career, Masar travels to have training partners, Sauerbrunn tries to stay fit between camps, and Angeli and Hemmings are at different stages of rehabbing ACL injuries. Amy Barczuk, a rookie in 2013 for the Western New York Flash out of the University of Colorado, sometimes trains with them as well.

The expectations, the teams they’ll report to, and the stages in their career are different for everyone. The future is somewhat uncertain, too.

“I just want to try. I have no expectations,” Angeli said. “Whether I make the team or I don’t, I just want to be healthy and this is what makes me happy, so I might as well try. It’s been a long road, but I am sure it will be worth it one way or the other.”

Jim Gabarra wants a longer NWSL season, but he knows that won’t happen any time soon.

“The biggest problem for me is not having our league synchronized with the FIFA calendar,” the Sky Blue FC head coach said in January at an NWSL roundtable before the draft.

Gabarra, who has held his position with Sky Blue FC since 2011 in WPS, was candid on that day about the NWSL’s shortcomings, many of which involved the schedule. The reality is that team owners can’t afford to pay players for a 10-month season, Gabarra said. So the regular crunch that will see the league open up on April 12 and play its championship on the weekend of August 30 remains.

Extending the season would mean missing out on the chance to get international players to come to the league, Gabarra says, since the transfer window to get them back to Europe – even on loan – would close before the end of the NWSL sesason. Even if international players left during the August window, they would be missing for a key stretch of the NWSL season – the playoffs.

A longer season would also deter players from serving as assistant coaches to college teams or finishing school in the fall semester, a point that came up in the 2010 WPS season, which did not end until late September.

So with the long offseason comes significant stretches without pay for players.

It’s a humbling experience for all players, Masar says. Some return home to live with their parents during the season. Some wait on tables – anything that bridges the gap from August to March (not to mention that some players’ contracts see them make as little as $6,000 from March to August, and most make under $20,000).

Marshall works for Avnet Technology Solutions, selling IBM software and managing regional clients. She’ll continue to work throughout the NWSL season in a more limited capacity, as she has in the past.

And there’s always the lingering uncertainty that women’s soccer has a place in the professional sports scene in the United States. Two prior leagues have failed, and many players, coaches, and owners in the NWSL were part of WPS, which closed shop before the 2012 season ever began.

Angeli says that, in some ways, that has drawn players closer together. It makes for greater camaraderie and creates a scene less common in other sports – players from rival teams training together, living together, and befriending each other to keep sharp in the off season.

Make no mistake, though, Monday – the first day of training camps across the league – and April 12 can’t come quickly enough.

“It’s about sacrifice more than anything in the offseason,” Masar said. “In-season we get lucky, we just get to play football, and that is something that I don’t take for granted.”

The Lowdown: What makes Portland work?
Streak’s snapped, but US must regroup in Algarve