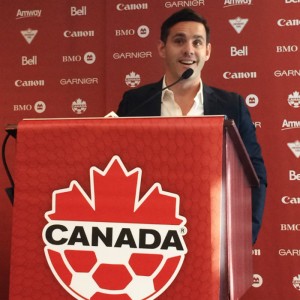 John Herdman says he is concerned about his players' health in the NWSL, especially ahead of the 2015 World Cup. (Photo Harjeet Johal for The Equalizer)

Canadian national team coach John Herdman isn’t prepared to fully commit to sending his best players to the NWSL in 2015.

“Last year was good, but we saw some gaps,” Herdman told reporters on a teleconference from Cyprus. “I think that’s what we’ll be looking at this year — we’ll see if we can get those gaps closed.”

Herdman stressed that there had not been a decision made for 2015 and that the Canadian Soccer Association would be reviewing the NWSL performance both in mid-season and at the end of the year. Only then would a full commitment be made.

“We’re not committed to five years, six years with this,” Herdman said. “This is a case of us working to put Canadians in the best position to be successful in the home World Cup.”

“We have an older team that has to be managed very carefully so I think that’s probably my biggest worry — the players are on turf, a lot of the games are on turf, training on turf…sometimes twice a day.

“So it’s more that I’m worried about the health of the players that they won’t get broken down.”

Herdman’s words seem to match the findings of a report obtained by The Equalizer.

According to the 2013 Canadian soccer women’s excel development plan — the post-season report Herdman refered to — the CSA plans to withhold its allocated players for the start of the 2015 season. Instead of reporting to their pro teams, the Canadians would spend the lead-up to the World Cup in a residential camp in Vancouver.

Additionally the CSA would recall its players 10 weeks prior to the 2016 Olympics.

“The NWSL is still in its infancy and like many of the women’s professional leagues around the world the (technical level) remains semi-professional with in many cases a lack of technical leadership that creates poor high performance and cultures,” the report reads.

Continuing: “While it is expected improvements will be made over the coming years through NWSL and USSF interventions the risk at this stage is too high for the 2015 Women’s World Cup tournament.”

According to the report the CSA has already informed the NWSL and USSF of the plan.