The Lowdown: Lilly gets call from the Hall 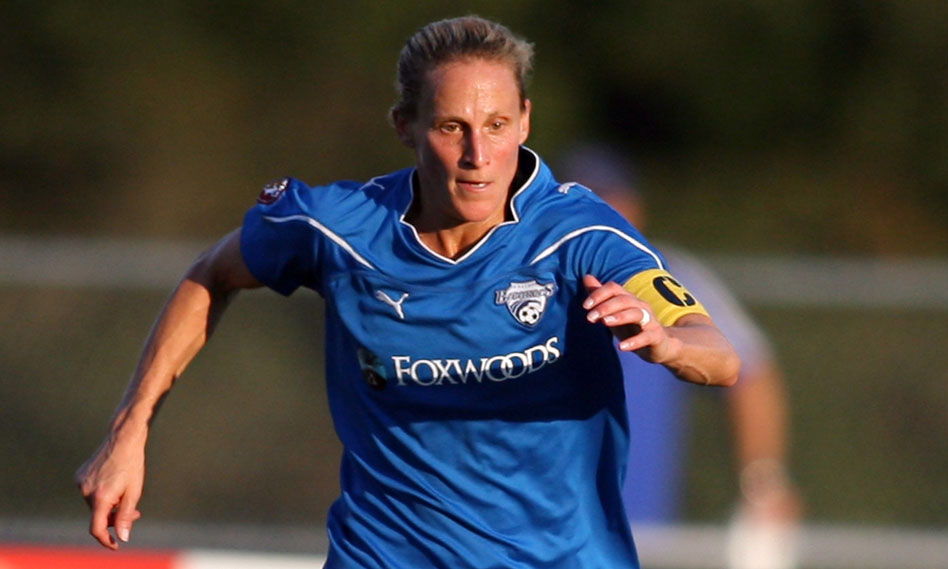 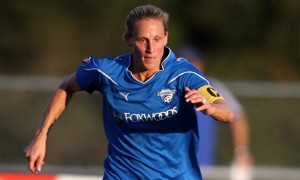 Kristine Lilly has been elected to the National Soccer Hall of Fame. (Photo: SoccerPlus.org)

Kristine Lilly still gets nervous as she watches the third penalty kick taker from the 1999 World Cup final.  They say the first and last kickers are the most important, but on that memorable day at the Rose Bowl, the third kicker was extra pivotal.  U.S. goalkeeper Briana Scurry had just made a save on Liu Ying giving the United States the edge.  They were in position to win the World Cup by making the rest of their kicks.  The third shooter, of course, was Lilly.

“Carla (Overbeck) and Joy (Fawcett) had both gone right so I had my brief moment where I considered changing but then I said no,” Lilly recalled Tuesday, a day after being elected to the National Soccer Hall of Fame.  “I remember being in a zone when I went up to take it.”

Lilly stepped into her penalty left-footed and it eluded Chinese keeper Gao Hong even though she guessed correctly.  “Luckily it went over her hand,” Lilly said.  Mia Hamm and Brandi Chastain followed with conversions and well, you know the rest — the U.S. won the World Cup.

But if not for Lilly there would never have been penalty kicks, or a U.S. World Cup win.  In sudden-death extra time, China won a corner kick and the ball went to Fan Yunjie, who headed it past Scurry; the ball was headed for the upper 90.  Scurry looked back, thinking the game was over.  Lilly slid off her mark on the post and calmly headed the ball off the line.  The U.S. cleared it, and the game went on.

“I was just doing my job,” Lilly said, speaking just as casually 15 years later as she acted in the most dire moment her team faced during the World Cup.  “There were so many moments in that game that could have gone either way.  I was just happy to be part of one of them.”

In the moments after that match, Chastain said, “Kristine filled her role on that play.  She was where she had to be and she made the play she had to make.”

Those two sentences pretty much sum up Lilly as a player.  Her election to the National Soccer Hall of Fame on Monday was not the work of a specific number or statistic, but the culmination of a career made of hard work and fundamental perfection.  Even Lilly’s status as the most-capped player of either gender in international soccer history (352) is a testament to her dogged work ethic.  When she retired in 2011 a few months shy of her 40th birthday, she was still scoring at or near the top in all of the fitness categories.

“Mostly I have thought about just the amount of years that I played and all the great teammates that I had,” Lilly said about her latest and greatest honor.  “At the same time I think how quickly it seemed to go.”

Lilly made her international debut in China when she was 16.  That was 1987, four years before the first World Cup.  “I remember when I was like 16 I signed my first autograph.”  Her final appearance for the United States came 23 years later, at age 39, in November 2010.

“It’s like, where did the time go?” Lilly reflected on her career spanning more than two decades.

Over the course of those world-record 352 appearances, Lilly played in the first five Women’s World Cups, winning the inaugural event in 1991 and the more famous triumph in 1999.  She was also part of the first three Olympic tournaments, winning two gold medals and a silver.

Lilly said the most exciting time was 1991 because, “we didn’t know what was going to change.  I think we thought we would come home from that World Cup and retire.”

In 1999, when organizers turned what was supposed to be a middling tournament into one of the century’s most iconic events, Lilly said, “We got so many responses from so many people.  The President (Bill Clinton) came so it was a big deal.”

News arrived to Lilly about the Hall of Fame about a week before it went public.  She told only her husband, a secret she said was easy to keep.  Monday her Twitter feed accelerated and she eventually figured that word was out.  The best part, she said, was “hearing from different people I haven’t talked to in a long time.”

She watches the current national team when time allows and thinks Tom Sermanni is doing a great job giving experience to so many players.

“When you represent your country you’re playing to be the best,” she said.  “When we took the field we had the attitude that we’re fitter, we’re stronger, we’re going to have a lot of fun and we have great chemistry.

“I hope they (current players) are enjoying what they’re doing.  It seems like they are.  They’re winning so that helps with enjoyment.”

The biggest difference in 2014 from Lilly’s heyday is the advent of social media, meaning players never seem as far from home as they once did.  “We used to sit around the hotel playing board games or cards or reading.  Today everyone is on Twitter or email.”

Looking back, the only thing Lilly would want to change is for her kids to have been old enough to have seen her play and remembered.  One day they’ll know.  And maybe one day they’ll get nervous watching their mom and teammates take penalties in the 1999 World Cup final.  Or maybe their heart will skip a beat—as the collective soccer nation’s did—when their mom cleared the game-winning header off the line in to save the United States’ World Cup dreams.