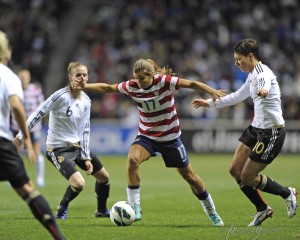 Tobin Heath has been called into the U.S. national team for the first time since injuring her ankle late in the 2013 NWSL season.  Heath, currently playing at Paris Saint-Germain, is part of Tom Sermanni’s 24-player roster for next month’s Algarve Cup in Portugal.

Alex Morgan, however, will not be with the team as she continues to recover from a an ankle issue. Morgan initially injured the ankle in late October and has been sidelined by it since December.

The U.S. will face Japan (March 5), Sweden (March 7), and Denmark (March 10) in group play followed by a placement match.

Defender Crystal Dunn is still recovering from an ankle injury, and midfielder Lauren Holiday — the 2013 NWSL MVP — won’t travel with the U.S. due to a “family commitment,” according to U.S. Soccer.

The U.S. will leave for Portugal on Tuesday and select players will be joining the squad at later dates before the tournament begins.  Among them is Sarah Hagen, currently with Bayern Munich, who will arrive March 2.  Hagen is one of four uncapped players on the roster.  Samantha Mewis, who was in the most recent camp, is back and her UCLA teammate Sarah Killion is making her first appearance in a senior national team camp.  The fourth of the uncapped players on the roster is Breakers’ goalkeeper Alyssa Naeher.

On the flip side, Heather O’Reilly heads to the Algarve on 196 career caps.  She will reach 200 if Sermanni plays her in all available matches.

Virginia midfielder Morgan Brian is back and could be on her way to being a regular fixture in the side even before she graduates college.

The full U.S. roster is below: