The Lowdown: Dissecting the club/country conflict 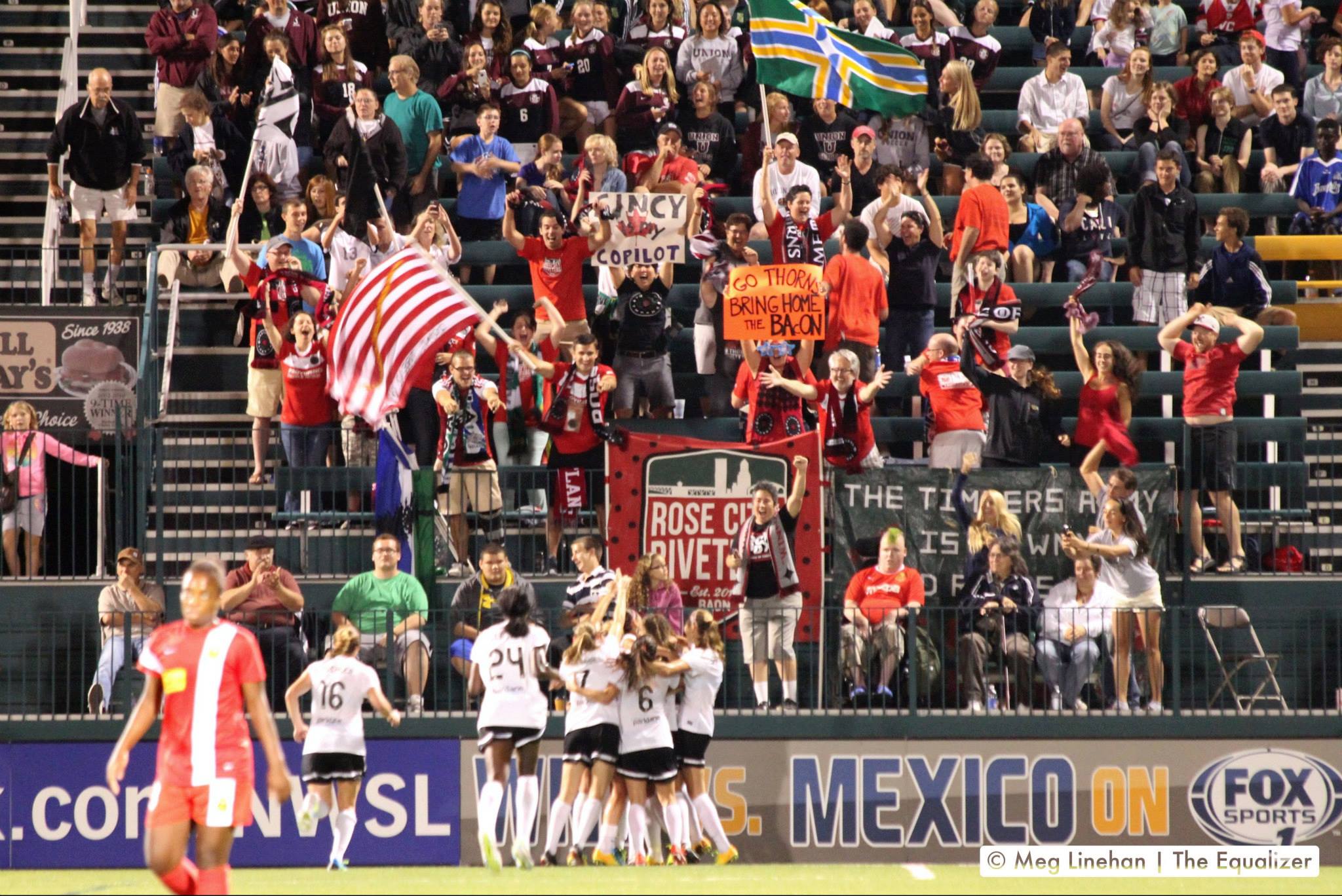 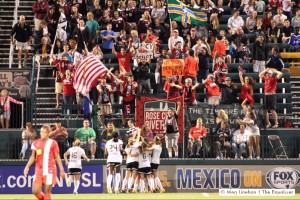 Will the NWSL improve upon the 2013 attendance records? In short: they have to. (Photo copyright Meg Linehan for The Equalizer.)

The schedule is out.  The rosters are more or less assembled.  The final announcements about venues have been made—we think.  And pre-season is now less than one month away.  The longest offseason in sports is grinding to a halt.  To read between the lines ahead of the second NWSL season is to see a group of clubs moving forward with their business plans.  Gone—for now—are the days of franchises folding and rogue owners gobbling up league resources with outrageous behavior.

Yet the perception is still that NWSL operates by the seat of its pants.  They made a late decision to add the Houston Dash, and roster building rules seemed to be created on an as-needed basis.  But most of those matters will be long forgotten if the league can get firm footing and establish itself as a fixture.

With that in mind here are a few of the hot questions to help break out us thaw out of this coldest of winters:

How necessary are USWNT friendlies?

The trending topic on Twitter the last few days has been about how the league will mesh with what could be up to five friendlies for the U.S. national team.  Already we know about the match in Canada on May 8.  The night before, the Red Stars are at Sky Blue and FC Kansas City is at Western New York.  Those will already be difficult dates to sell being as they are midweek affairs before school gets out.  It should be a particular challenge for the Flash who host the Thorns in their home opener just four days earlier and then host Sky Blue another four days after that.

May 8 is the only official fixture for the U.S. during the NWSL season.  An expected April date should be before the season as in 2013 when they played Germany and Netherlands the week before opening day.  However, according to fifa.com’s World Match Centre, the U.S. will host France on June 14 and 19.  The page notes the information as unofficial. (Also, hat tip to Sarah Gehrke of The Soccer Desk for this one.)

There is also an international date in August which would conflict with the heart of the NWSL playoff race.

Major League Soccer has dealt with international conflicts since its launch in 1996.  The difference is that the national team players are far more critical to NWSL than their male counterparts have ever been to MLS.  Last season after the only two Midwest-based teams in NWSL, Chicago and Kansas City, played each other twice in four days, players and coaches were asked if they felt it was the start of a rivalry.  By far the most common answer was no because both games were played without several key internationals including all of FC Kansas City’s U.S. players.

There is no perfect solution to this issue, but it does sometimes seem like NWSL and the U.S. national team are operating without regard for each other.  An NWSL official told The Equalizer’s Meg Linehan earlier this week that national team players will probably miss five to six games.  (Flash coach Aaran Lines had suggested as many as nine.)  If it’s six, evenly distributed home and away, that means season ticket buyers go into the season knowing their home team’s best and best known players will not be there for 25% of the season.

At some point, assuming the league lasts long enough, the clubs will become established brands that, along with having greater flexibility in scheduling, will be able to better offset the loss of star power.  For now though, the individual players mean more than the teams themselves.

What are some early season matches to circle?

Last week we did the team-by-team analysis of the schedule.  What about the matches that look like can’t miss affairs?

April 12, Thorns at Dash:  The Dash have not played a game yet, and president Chris Canetti has said the Thorns were instrumental in getting them in the league, but somehow it feels like these are rivals.  Maybe it’s because they are the two MLS-backed teams who figure to run 1-2 in attendance.  Maybe it’s because of the imaginary connection linking Alex Morgan to the Dash (yes, Morgan is engaged to Dynamo midfielder Servando Carrasco, but she was never going to leave the Thorns.)  Truth is, Morgan’s appearance in this one appears to be a question mark due to her ankle injury.  But the league champions and their charismatic new coach Paul Riley visiting the league’s brand new team feels like a good way to open the season.

May 3, Thorns at Flash:  The Flash home-opener will be a rematch of the final.  That’s an 11-year first for women’s pro soccer since WPS had one of the final combatants fold after the first two seasons and the league folded after the third.  On the Flash and Thorns—let’s not forget how chippy last year’s title match was or how intense the first regular season meeting in Portland was.

May 10, Reign at Thorns:  Last year we pretended this was a rivalry because the cities’ respective MLS teams cringe at the site of each other.  But the Thorns won all four matchups and the Reign always languished well behind the playoff teams.  It’s a new Reign team this season, at least on paper, and this could be the foundation for a more serious rivalry.  I know, enough Thorns, but they matter on a lot of fronts.

June 4, Spirit at Red Stars:  The UEFA Champions League final is May 22.  That would give Christen Press, if Tyreso makes it that far, a day short of two weeks to make her way to Chicago to appear in this match.  If she does it would pit the league’s top newcomer against the top draft pick, Crystal Dunn of the Spirit.  It would also turn what looks like a mundane, midweek match into something of a party.  Don’t hold me to a Press appearance here though, it’s pure speculation.  And of course there remains a chance she arrives earlier, maybe even for opening day if SV Neulengbach can pull the quarterfinal shocker.

June 19, Reign at Breakers:  If the U.S.-France matches come off, and Sydney Leroux gets picked for the U.S., this match will be the poster for all that is wrong with the NWSL/USWNT scheduling clashes.  Leroux scored 11 goals for the Breakers last season and had the league’s first hat trick.  She was traded to the Reign and this is their only trip to Boston in 2014.  Leroux was only in Beantown for a season but she is the type who fans will want to see whether it is to welcome her back or tell her they’re okay with her having left.  But if she’s not there…

Will attendance be higher?

The short answer is, it better be.  The Thorns tweeted that they are nearing 10,000 season ticket holders and an official with the club told The Equalizer last month that they expect to top last season’s average of 13,320.  And indications from Houston ate that they should be able to beat the league average of 4,271.  On the flip side FC Kansas City downsized with their new venue which seats only 3,200.  So barring additional seating or a match at an alternate venue, Blues attendance will drop about 1,400 even if they sell every ticket.

What about the others? Sky Blue FC and Chicago pulled up the rear in attendance and almost have to go up.  The Breakers figure to do enough at Harvard Stadium to outperform Dilboy Stadium, which worked in WPSL Elite but not so much in NWSL.  The Reign rallied to average 2,306 and are moving to downtown Seattle.  They’re counting on gains.

The Spirit averaged 3,625 to the SoccerPlex which in some ways was the most remarkable number in the league because fans continued to come even though the team was lousy.  Crystal Dunn alone should help out early on, but it will be interesting to see how loyal the Beltway folks are if the Spirit fall off the pace again.

As for the Flash they were struggling to pull 4,000 early in the season but finished with five straight at home (including two playoff games) that averaged 7,071.  Which way will they go in 2014? There are some scheduling challenges like the one noted above, but Flash attendance (which averaged 4,485 over 11 regular season matches) could well turn out to be the wild card that determines whether the league’s number rises or falls.

There is another factor to consider when analyzing attendance.  The addition of one home match per team will obviously increase totals, but will it have a drag on average? Once-a-season type fans are still likely to go to a single game which will stretch walk-up numbers thinner across the league.  The extra match also increases the likelihood that once-a-season types are able to make use of friends’ season tickets rather than purchasing their own.  Sky Blue and the Flash both open their home slates against the Thorns who should remain the top road draw in the league (as compared to team’s averages; the Thorns can never lead the league in road attendance without having a chance to play themselves in Portland.)  Can those teams use what should be popular openers to convince folks to come back for more throughout the season?

However the numbers break down, it will be an extraordinarily positive development for NWSL if that final, average attendance number comes in higher than it did in 2013.