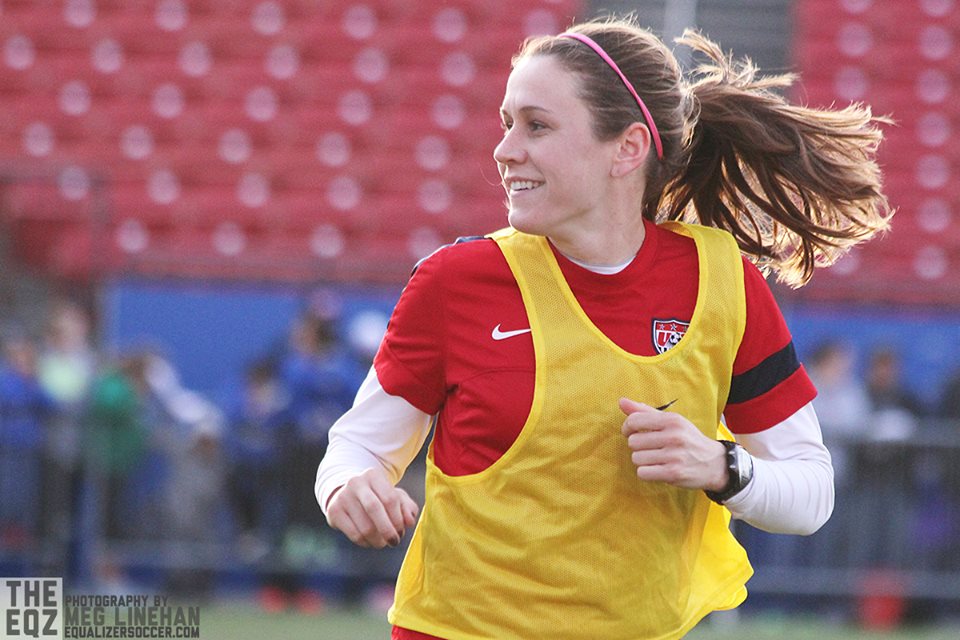 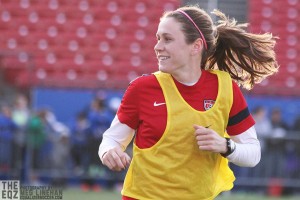 Heather O'Reilly dominated against Russia in the first half, with a goal and an assist. (Photo copyright Meg Linehan for The Equalizer.)

In a high-scoring affair at FAU Stadium in front of 8,857, the United States women’s national team defeated Russia without any challenge 7-0. Both Christen Press and Carli Lloyd had braces, and Heather O’Reilly, Sydney Leroux, and Abby Wambach each added one of their own.

Russia showed little spark in either half, and was unable to put together an effective counter or pose a serious threat to the U.S. defense or Hope Solo. They had serious issues with retreating defenders and ball-watching throughout the entire match. It certainly didn’t help matters when they went down a player in the 69th minute after defender Valentina Orlova pulled down Amy Rodriguez. She was issued a straight red card for the denial of a goal-scoring opportunity, but things were already too late for Russia.

There was only one decent look for Russia in the 87th minute, with the U.S. defense getting caught out in the waning moments of the game. Solo was able to preserve the shut-out.

At the end of the first half, it was already 3-0 to the U.S., and Russia simply did not have answers for Heather O’Reilly and the returning Carli Lloyd. Lloyd was the first to finally break the stalemate in the 32nd minute, on an O’Reilly assist. Lloyd was unchallenged by a single red shirt as she found her spot to strike and Russian keeper Elvira Todua had little chance.

O’Reilly made it 2-0 after a smart half-volley return on a rebound off of Todua, and the goal was well deserved after her complete dominance against the left side of the Russian defense.

Lloyd’s brace only took another five minutes. Once again, zero pressure from the Russian defense allowed Lloyd to find her preferred shooting location at the top of the eighteen, and the U.S. closed out the first half with a 3-0 lead.

Christen Press would earn a brace of her own in the second half, opening the scoring action in the 52nd minute by redirecting a Carli Lloyd cross past Todua. Three minutes later, it was Sydney Leroux’s turn to add to the scoreline by a signature Leroux goal, streaking inside the six and taking the shot as she was dragged down by a Russian defender.

Press’s second goal was a quick put-back from a bad Todua first touch at close range. Head coach Tom Sermanni then swapped out his entire front line, taking off the starters Leroux and Press and subbing in Abby Wambach and Amy Rodriguez.

The final goal came from Wambach, who merely needed to take a touch after a nifty tap from Rodriguez right in front of the net. Mercifully, the U.S. would not get another before final time was called.

Carli Lloyd was named Woman of the Match after her brace and one assist performance.