Solo: A different environment in Seattle 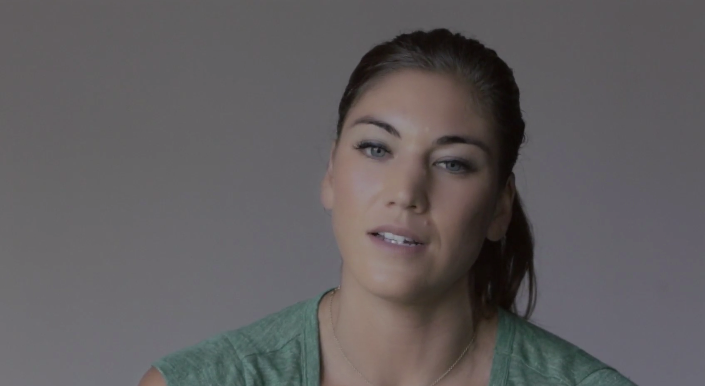 In the Seattle Reign FC documentary released by the team today, the first words we hear from any player are from Hope Solo.

“If you introduced yourself first, I would say, ‘Hi, my name is Hope.  It’s nice to meet you.”

And perhaps this film can serve as a re-introduction to Hope Solo as a person and as a player.  Early on in her one-on-one itnerview, she admits once again to struggling with the motivation to play for the Reign in the NWSL.  She says, “I came in and I was like, gosh, how am I going to do this?  I don’t want to be that athlete that goes through the motions.  I don’t just want to show up and do it because I have a contract.  And I found myself doing it, and I think Laura knew it.”

Before Hope Solo made her debut in the National Women’s Soccer League, the Reign went 0-6-1 with Michelle Betos as their starting keeper.  Solo played her first NWSL game on May 25, 2013.  The result: a 1-0 loss at Starfire Stadium to Portland Thorns FC on an 83rd minute (somewhat controversial) penalty kick from Christine Sinclair.

It would be another month before Seattle finally erased the zero in the win column in a 2-1 away victory over the Breakers.  That night, Solo took the time to speak with each of her defenders on the field after the celebrations died down, to reinforce that they deserved the win.

But that night in Boston, Solo also spoke about her opinion of the NWSL to the media.  One month, it was clear she wasn’t quite sold yet.  “Each player appreciates the league in different ways.  Some players want more game experience and game decision making.  I want my training and I want the environment with my national team players, so it’s different for everybody.”

A reporter asked as a follow-up question, “Is it a bit of a culture shock to play in Wembley and then play here?”  Here being Dilboy Stadium in Somerville, with a seating capacity equal to roughly three percent of the attendance for the gold medal match in the 2012 Olympics.

“Absolutely, absolutely,” Solo said.  “I’m doing my best to get up for every game.  You know what’s interesting is it has been hard for me to get up and have that level of focus I have with the national team.”

“There’s a camaraderie amongst our team that I haven’t felt in a long time.  It’s not playing for the paycheck, it’s playing because, gosh, these girls are working hard, these athletes are working hard.  I like our defenders.  We don’t seem like a losing team.  Yes, I know our record sucks, but we don’t seem like a losing team.  And it makes me want to win for them, not for the people in the stands.”

Eight months later on film, the narrative thread of Hope Solo’s emotional buy-in to playing in the NWSL and for Laura Harvey is front and center once again.  More importantly, the Reign documentary shows the completed journey of a superstar who was deeply affected by four months of playing at Starfire Stadium.

Solo recounts a conversation she had with Harvey. “She was like, Hope, if you don’t want to be here, just tell me and I’ll respect that.  So it took me some time.  I built some rapport with my teammates, and I found respect for Ben [Dragavon], our goalkeeping coach, which is hard to do as a goalkeeper.  But I had great respect for Laura right off the bat.”

Harvey seems to have a management style that the entire team appreciates, but it may have been her relationship with Solo that directly changed the course of the goalkeeper’s approach to the NWSL and allowed her to start building real connections rather than going through the motions for a few months.

By the end of the twenty-two minutes, Solo makes her boldest statement yet.  “I love Seattle.  We have family here, we have our dogs here.  Not to mention my commitment level towards Laura and to this city is more than any other team or coach I could ever imagine.”

Solo’s part of the Seattle documentary will probably make the biggest waves, but her hesitance isn’t new information.  Her high praise of Harvey and her teammates from the 2013 season isn’t exactly news either, but seeing her thoughts on the season as a whole by August does shine new light onto how the NWSL and more importantly, Seattle Reign FC, were able to get Hope Solo to buy-in and believe in the product on and off the field.

Solo’s personal fulfillment in Seattle shouldn’t be considered as a negative for the national team, but instead, a huge boost.  While many will bring up the relationship she has with her teammates in Seattle and the comments she made in comparison to her national team comrades, there is no downside to a new spark or new motivation for Solo to step onto the field.  It also shouldn’t be surprising that a club environment could prove to be tighter-knit than the semi-regular camps, tournaments, and friendlies of the national team.

Increased performance in Seattle means better results on the international level, and the fact that Solo confirms she has trust in the Reign coaching staff means her personal training standards are being met on a regular, consistent basis while the league is in season.  Assuming the Reign are able to duplicate or improve upon the environment of 2013 in the upcoming season, there will only be upsides for Hope Solo as the national team gears up for World Cup Qualifying in 2014.