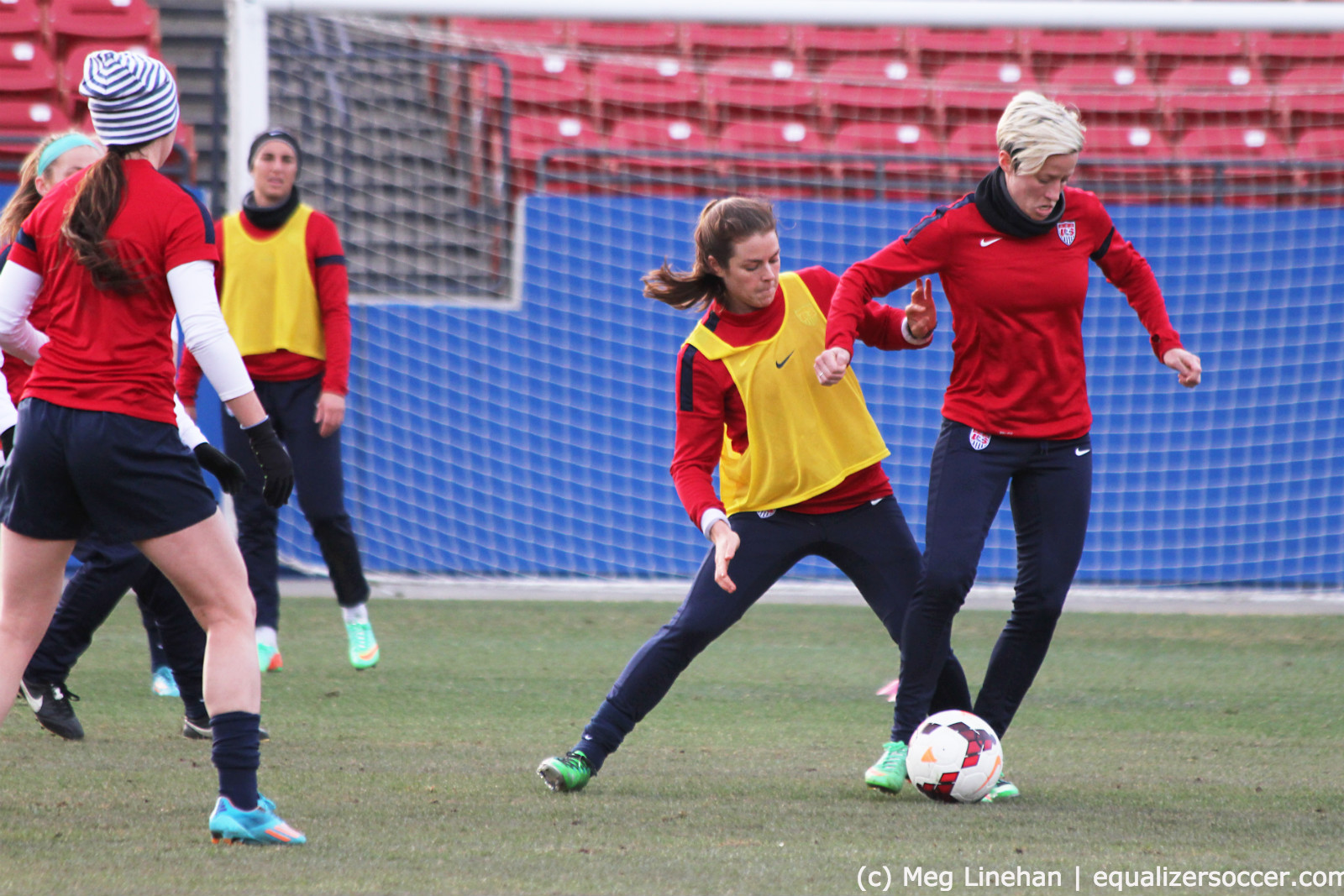 FRISCO, Texas — The United States women’s national team had their last practice before their match-up versus Canada in front of fans at Toyota Stadium on a blustery day. While the drills may have been slowed down, the atmosphere was the same as always: the first match of 2014 is business as usual.

Head coach Tom Sermanni admitted the rivalry wasn’t perhaps an equal one between the two sides of the North American derby, “It’s another game, but there’s rivalry on both sides. I think there’s always more rivalry for the side that’s perceived as the underdog.”

That’s not to say the U.S. isn’t perhaps still giving the game a little extra weight. The team still wants to bump a 46-3-5 all time record up one win after Friday’s 90 minutes have finished. Sermanni said, “You want to win against your local rivals, and it’s important to us as well.”

Sermanni did offer up updates on two notable absences from the squad: Tobin Heath and Alex Morgan. 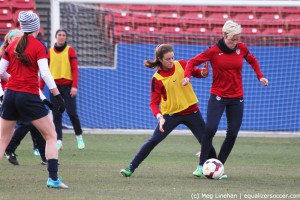 Kelley O'Hara goes up against Megan Rapinoe in open practice at Toyota Stadium in Frisco, TX. (Photo copyright Meg Linehan for The Equalizer.)

Heath could be right around the corner from her return to national camp. Sermanni said, “When we announced the squad, Tobin wasn’t fit, she wasn’t ready. She played a little bit of game at the weekend [with PSG], and that’s all she’s played the last four months. So it was unrealistic to even think about her for this camp.”

On the other hand, Sermanni was much more cautious when discussing Morgan’s ongoing battle with a stress reaction in her left ankle. He said, “Alex is making good progress. It’s a little injury that we need to take a great deal of care with, make sure it’s not rushed and make sure we treat it properly. We treat it carefully and we make sure she’s 100 percent before we bring her back.”

With the NWSL preseason fast approaching, Sermanni discussed the balance needed between weighing club needs versus the national team’s in a Women’s World Cup qualifying year. “It depends where Alex is at, coming back into the league. She certainly won’t be playing for anybody—whether it’s us, or a league team—until she is completely 100 percent fit. And if there’s any doubt about her fitness, we’ll make a call on that and take the appropriate action.”

With Megan Rapinoe’s return to the United States and the NWSL, there will no longer be any concerns about availability for national team camps. As she said, laughing, “I think people are actually shocked to see me in consecutive camps. I haven’t done that for over a year.”

For Rapinoe, national team camp feels like home, but there was another real factor that went in to her decision to return to the States. “To be able to be in [camp] consistently, it’s not like I need to get to know the team, but with the new coach and trying to play a few new systems, especially going into qualifying, to just get more minutes on the field with my teammates—that’s a good thing.”

As previously reported on Twitter, Kelley O’Hara confirmed she will not play in the match against Canada, though there is the potential for her return to game action in the two matches against Russia. O’Hara’s home state is Georgia, so the February 12th match to be held at the Georgia Dome in Atlanta is a good bet.

“I’m kind of 100 percent,” said O’Hara. “Just taking some drills off and listening to my body, that sort of thing.” O’Hara praised the team who helped her with rehab throughout the fall. She took two weeks off after her surgery in the fall since she was in a soft cast, but once she had been transitioned to a boot, she was in rehab three times a week or more.

“I mean, I am in a rush,” said O’Hara, smiling. “But at the same time, it’s about being professional and looking at the long-term. I’m just happy where I am right now.” 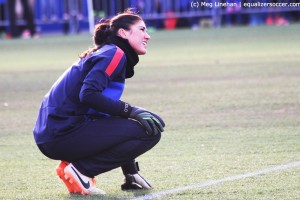 Hope Solo pauses for a moment during a drill at Toyota Stadium in Frisco, TX. (Photo copyright Meg Linehan for The Equalizer.)

Hope Solo was limping slightly by the middle of open practice, and spent the majority of her time running drills rather than taking shots from her teammates. Jill Loyden was the goalkeeper of choice to take shots during drills Nicole Barnhart was noticeably (and audibly) sick and coughing for all of open practice. Solo did sign for an extended time after practice had ended.

Rachel van Hollebeke (née Buehler) was not on the field for open practice, and there was no explanation for her absence. (It did not become clear until after media time had finished.)

Carli Lloyd did practice with the team, but will be unavailable for tonight’s game due to her red card in the last match against Brazil on Nov. 10 last year.

The game kicks off at 9 p.m. ET from Toyota Stadium in Frisco, Texas. The game will be on Fox Sports 1, and the broadcasting team includes JP Dellacamera, the Boston Breakers’ Cat Whitehill, and the Chicago Red Stars’ Leslie Osborne.

Canada looking to reverse trend against USWNT
Leroux does it again, lifts US women past Canada