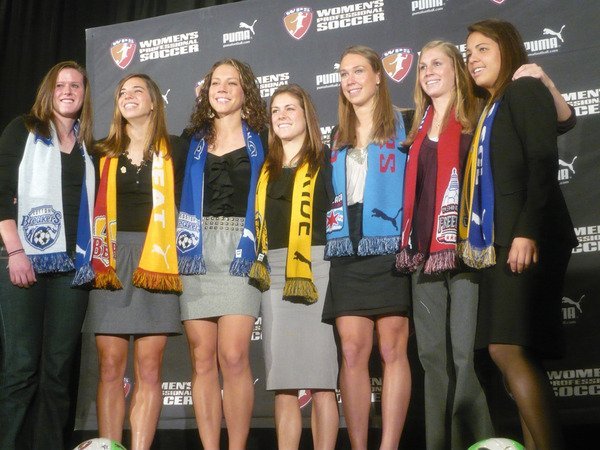 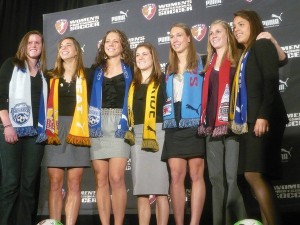 The 2010 WPS draft was loaded with talent from the first pick Tobin Heath (above, 2nd from left) to the last pick Taryn Hemmings.

The soccer world descended on Philadelphia last week for the NSCAA Coaches Convention.  The NWSL College Draft was a tiny blip on the radar at the convention, but for fans of the women’s game it was everything.  Evidence lay in the crowd that jammed into the draft room for the first women’s pro draft open to the public since 2010—the last time the NSCAA brought its act to the City of Brotherly Love.

That 2010 WPS Draft stands as one of, if not the absolute, red-letter days in the history of that league.  The mood was jolly with two new teams on board and a deep draft already impacted by multiple blockbuster trades that influenced the order.  The fans who filled the room and cheered the newly minted professionals gave the league an air of legitimacy.

In that regard, the 2014 NWSL Draft beams with familiarity.  The draft room, albeit a smaller one than four years prior, was similarly overflowing.  The feeling of legitimacy this time came from the expansion club in Houston and the appearance of NFL linebacker Brian Cushing, brother-in-law of No. 2 pick Kealia Ohai.

The NWSL hopes the similarities end there.  Less than a month after that 2010 WPS Draft, the league’s most visible and talented team, the Los Angeles Sol, folded when negotiations with new investors collapsed in the fine print.  The season went on with eight teams but Jeff Cooper, owner of Saint Louis Athletica, was in financial trouble.  By the time the season opened he had secretly begun taking help from silent partners overseas.  By June the team was broke and out of the league.  Officials scrambled to adjust the schedule to finish the season without Athletica, and to save face.  For all intents and purposes though, WPS was in an uncontrollable spiral towards extinction.

There is one other area, though, where NWSL hopes to emulate the 2010 WPS Draft.  Four years is hardly enough time to judge, but based on the body of work to this point, the 2010 draft class is far and away the best group of players ever to exit college during a league year, be it NWSL, WPS, or WUSA.

There were 11 1st Round picks that year—the expansion sides were given the top two picks plus two sandwich picks, considered 1st Rounders—and nine of them will feature prominently in the NWSL this season.  A 10th, Ali Riley, beat them all out for Rookie of the Year and now plays in the Swedish Damallsvenksan with FC Rosengård (formerly named Malmö), where she was named to the league’s First XI all-star team in 2013.

The top three picks were Tobin Heath, Lauren Cheney (now Holiday), and Kelley O’Hara.  All three are firmly embedded in the U.S. national team and Holiday was NWSL MVP in its inaugural season.  The fourth pick, Whitney Engen, was named WPS Defender of the Year in 2011 and is a threat to crack the national team’s starting lineup in time for the 2015 World Cup.  The sixth pick, Brittany Taylor, joined Holiday on the NWSL’s Best XI in 2013.

Other members of the 2010 first round include Nikki Washington (No. 5), now in Houston where she hopes to finally nail down some consistency having battled injuries since her senior season at North Carolina; useful defenders Nikki Marshall (No. 7) and Kiersten Dallstream (No. 10); and Breakers’ starting goalkeeper Alyssa Naeher (No. 11).

The depth of that draft went far beyond the first round, though.  Becky Edwards went No. 12 to FC Gold Pride to kick off a second round that also included Jessica McDonald, Jordan Angeli, Kristina Larsen, and Ashlyn Harris.  (The Edwards pick was acquired with the Riley pick in a trade that sent goalkeeper Allison Whitworth to Atlanta.  It was a foolhardy trade since no goalkeepers had been taken at the time Riley went No. 10, so the Beat could have had Riley or Edwards and Naeher.  When Whitworth proved incapable of holding the starting spot in Atlanta while Gold Pride won the championship with Riley and Edwards, the trade moved from foolhardy to completely lopsided.)

The third round included Estelle Johnson, Katie Schoepfer, and Beverly Goebel.  Katherine Reynolds and Veronica Perez went in the fourth.  And from way down in the seventh round came Jackie Santacaterina and Taryn Hemmings (the 65th and last pick), both of whom blossomed in Chicago last season.

This year’s class has long been considered deep.  It was part of the reason it made sense for the Red Stars to trade Keelin Winters last March for an extra first round pick.  Crystal Dunn is already a semi-regular with the full national team, Julie Johnston has been capped, and Vanessa DiBernardo has been to camp.  Those are all top four picks.  It takes a special group to make an impact 20, 30, or more picks down the line.

Whether or not the 2014 draft class makes its mark long-term, the way the day can be remembered fondest is if we’re still talking about the NWSL five years from now.

— The biggest news post-draft is Megan Rapinoe leaving her Lyon contract early to join the Reign ahead of the 2014 season rather than in the middle of it.  Coach Laura Harvey said the mistake the club made last season was to wait on Rapinoe and that they would have to figure out how to manage that better this time around.  That problem has been solved with this announcement.

— Harvey, also the Reign general manager, balked when asked about the team playing this season at Starfire Stadium.  She said a venue announcement should be coming in short time and insisted Starfire was in the mix.

— Red Stars coach Rory Dames said the plan was to take Johnston and DiBernardo even before the Dash came on the scene and were given the No. 2 pick.  “I was a little nervous about Johnston being there at 3,” he admitted.

— It was never an issue claims Dash coach Randy Waldrum.  “As soon as I took the job I knew it was what we were going to do,” he said of picking Ohai, whose sister and brother-in-law, Texans LB Brian Cushing, live in Houston.

-The 11th first round pick in 2010 was Casey Nogueira (now Loyd).  Tagged with a high talent/low work-rate label, Loyd played sparingly for FC Kansas City last season on a contract that did not require her to be available for every road match.  The Dash left her on the board in the Expansion Draft despite her Texas connections.

— Chicago Local 134, a supporters group dedicated to the Red Stars, is ramping up again after a period of inactivity.  The group is meeting Saturday, February 8 ahead of the U.S. friendly against Russia.  Information about the event and the group can be found here.