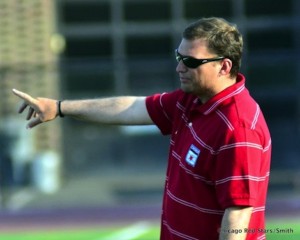 Rory Dames will be offering direction to Julie Johnston and Vanessa DiBernardo, the No. 3 and 4 pick respectively in the NWSL Draft.

PHILADELPHIA — The buzz heading into draft day was about Crystal Dunn going No. 1 to the Spirit and about the Dash having been given the No. 2 pick as part of their roster building.

But the Red Stars held the strongest hand with consecutive picks that followed the Spirit and Dash.  Little did they know last March when they moved Keelin Winters to Seattle Reign FC for a 1st round pick they would land Julie Johnston from Santa Clara and Vanessa DiBernardo from Illinois.

“Julie was the driving force behind the (2012 U-20 World Cup winning) team,” Red Stars coach Rory Dames said after the draft. “And she has shown throughout her college days that she can play anywhere on the field and play well at any position.

“We’ve had Vanessa before with us (at Chicago Eclipse Select).  Vanessa will be one of the best box-to-box players that will be in the league next year.  She should take a little bit of the pressure off of Lori (Chalupny).  We won’t have to run Lori as much.  They’ll be a good compliment together.”

Adding to the package is that Johnson is capped by the national team and DiBernardo—who was also on the U-20 championship side—was called into camp in 2013.

Summing it up, Dames believes he just drafted, “the best defensive midfielder and the best attacking midfielder in the draft.  We were a little nervous about Julie falling to three once Houston got ahead of us.

“We have two great players and great leaders in Lori and Leslie (Osborne) that kind of play up the spine for us.  So Julie and Vanessa just made sense.  They’ll be the heir apparents there.”

The addition of Johnston and DiBernardo via the draft caps an explosive offseason for the Red Stars, who were allocated Christen Press.  That means they were able to add three significant pieces without having to move anyone.  The Red Stars are also expecting Amy LePeilbet back after missing 2013 following knee surgery.

[MORE: Dunn goes No. 1 to Washington |  Ohai lands in Houston, with family]

The 2014 Red Stats will undoubtedly be more talented than the 2013 version, but like last season much of their success could depend on how they hold up before late-arriving players are in and how players recover from injury.  Besides LePeilbet, others currently recovering from surgery are Taryn Hemmings (ACL) and Jackie Santacaterina (hip).

Dames is cautiously optimistic all three will be ready for opening day.  “We’ll have some question marks heading in but if we can get everybody healthy and get everybody physically there we feel pretty good about where we are.”

There are some players who definitely will not in the team in April.  Shannon Boxx is pregnant and her return date is up in the air.  Press is staying in Sweden through the end of the Champions League and Melissa Tancredi is finishing school.  Enter Hayley Brock, the Red Stars’ only other pick Friday, at No. 22 overall.

“I know Hayley back to her club days.  She wreaked a lot of havoc on my club teams,” Dames said.  “We needed a little bit of size and we needed some pace.  I know everyone is excited about Melissa and Christen, but there is still a lot of season before they come so we needed to add a forward that had some size and bite to her and Hayley fit that perfect.”

The 2013 Red Stars were hit hard by injuries and absences and never fully recovered.  The 2014 version will have some similar issues but appears far better suited to stay afloat until the team rounds out.