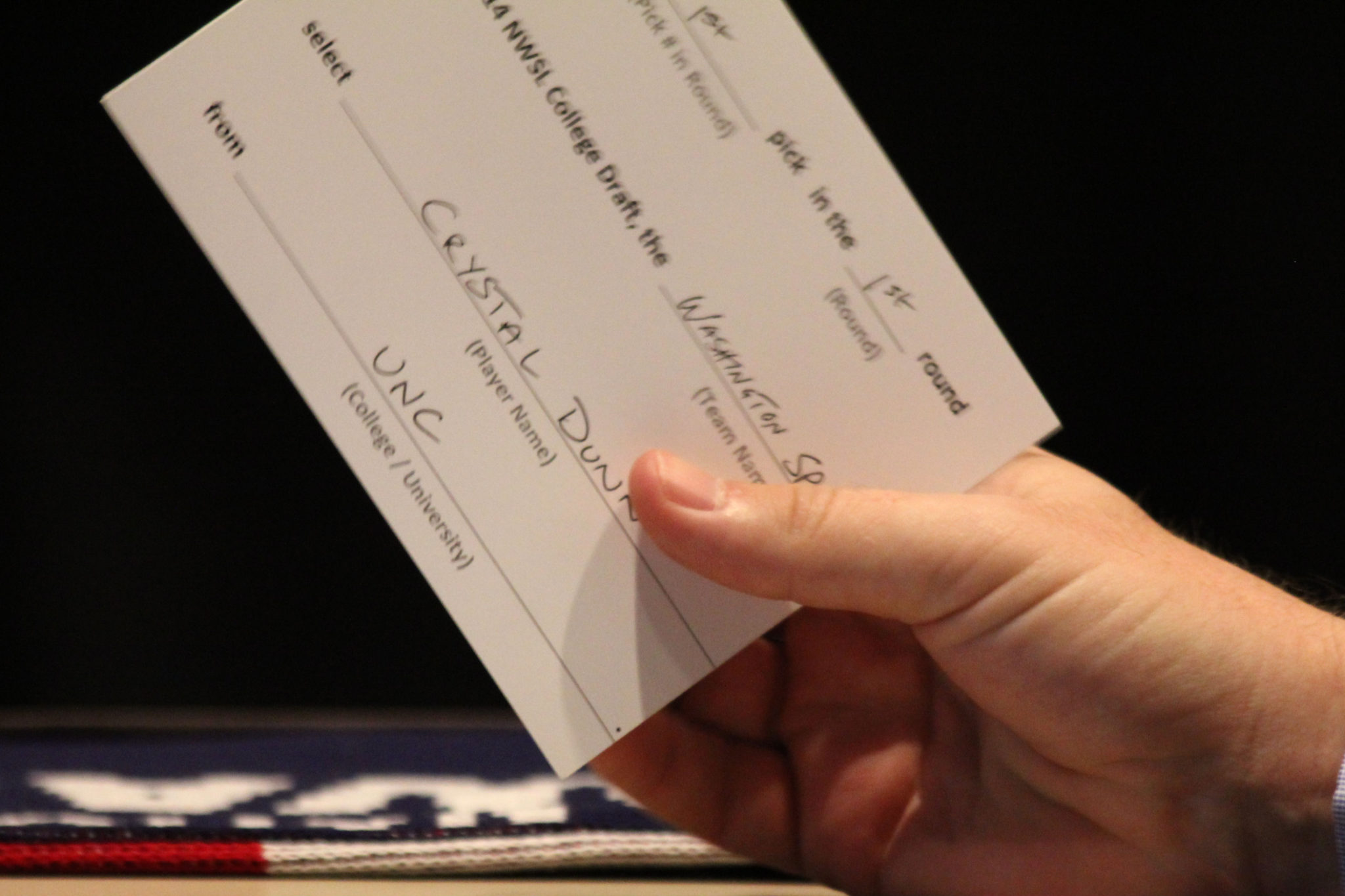 Crystal Dunn was the No. 1 overall selection by the Washington Spirit in the 2014 NWSL College Draft. (Photo by Meg Linehan for The Equalizer)

PHILADELPHIA — The 2014 NWSL Draft got off to the start everyone expected when the Washington Spirit made University of North Carolina midfielder Crystal Dunn the first overall pick.  The Dash followed by taking Kealia Ohai making Dunn and Ohai the first college teammates ever to be drafted 1-2 in a women’s pro league.

The 2nd round began with a trade.  The Thorns re-acquired Meleana Shim from the Dash in exchange for the No. 11 pick and a player to e named later.

Check back here throughout Friday for updates.  (note that traded pick notes only apply to draft-day trades.)

The first name off the board in this draft was never in question and rightfully so. Dunn is not only capable of playing multiple positions, but is capable of playing them extremely well. She’s played right back for the both club and country. Dunn also scored 14 goals this year for UNC playing in the midfield. The Spirit’s midfield seems full and they have Ali Krieger at right back. It will be interesting to see where Mark Parsons put her, but expect Dunn to be placed in a position to score goals.

Ohai coming off the board at number two is definitely more debatable than her UNC teammate going first. While Ohai is a fast striker, capable of playing on the wing, Houston could have opted for a midfielder instead. Houston acquired several attacking options via trade and the expansion draft, but they only have three midfielders currently on the roster. Given uncertainty surrounding Tiffany McCarty and Stephanie Ochs, is hard to say whether Ohai will see time on the wing or up front. She has some Houston connection through her sister Megan, who is married to Texans LB Brian Cushing.

DiBernardo is a creative and crafty midfielder who’s spent time in camp with the full National Team. Despite missing part of her senior season with a knee injury, she leaves as the all time leader in assists and third all time in scoring. She’ll be expected to contribute to the Red Stars attack right away with both Melissa Tancredi and Christen Press likely to miss the start of the season.

Kallman is an All American and was a leader of a Florida State team that appeared in three straight College Cups. She was also a member of the 2012 U-20 Women’s World Cup team. She’s also capable of contributing to the Kansas City on set pieces as she can deliver some potent headers. Kallman fills a need for Kansas City as they’ve lost Lauren Sesselman and Desiree Scott looks like she’s headed to England.

Hayes is a quick footed striker who’s scored 10+ goals a season at Penn State the past three years. In her sophomore year she scored 31 goals- more than anyone else in the country. She could use some work on her finishing, but this is a good pickup for Sky Blue who will likely miss De Vanna the first few months of NWSL action.

Frisbie scored 12 goals as a forward her junior, but converted to centerback her senior season where she excelled. Considered a top prospect before this year, Frisbie has even more value now as she’s proven she can play both sides of the ball. She earned first team All-American honors this year. Seattle needs upgrades on the backline and Frisbie will definitely help them. Frisbie is versatile, but she’ll mostly likely play either centerback or possible as an outside back.

Ezurike is the first international off the board and rightfully so. The tall, fast, Canadian forward has all the making of a dominable offensive threat. Ezurike leaves Michigan as the Wolverines’ career points (118) and goals (49) leader. She scored 14 goals both her junior and senior season. Boston needs offensive firepower more than any other team after the loss of Sydney Leroux in a trade and Kyah Simon out for the season with an ACL injury. This pick takes up an international slot for Boston which sends a statement about how much Boston thinks she’s worth.

Verloo spent time on the Cardinal backline her first few seasons due to the offensive depth the team had. As a forward the past two seasons, Verloo scored 10 and 9 goals respectively. Verloo and Stanford had a rare off year and her production wasn’t what it should have been. A 5’9 she’s also got good size. With Sam Kerr likely out while Australia attempts to qualify for the 2015 World Cup, the Flash will need some more offensive weapons.

The second round of the draft started with a real surprise with the Dash picking up Rafaelle Souza, a Brazilian. Souza scored 49 goals and 20 assists during her career at Ole Miss, so it’s not a surprise talent wise. Houston added Ohai in the first round and already have Stephanie Ochs, Tiffany McCarty and Ella Masar. Rather than a forward, Houston would have wise to pick a midfielder especially in light of the forward density of this draft.

Diggs is a standout central defender in a pretty deep class. She was named to a 3rd team All American ’13 and was a 2nd team All American ’12. She also earned defender of the year in for Conference USA in both 2012 and 2013. A fast and powerful player, Diggs is a great addition to the Dash. The Dash definitely needed some defenders especially since Whitney Engen will likely be unavailable for the first part of the season.

Marlborough is a great local pickup for Kansas City and adds depth to a shaky Kansas City striker core. Before transferring to Santa Clara, Marlborough earned to Big 12 offensive player of the year awards at Nebraska. She’s got great size coming in a 6’0. She scored 59 goals in three years at Nebraska, but does lack some discipline.

Anasi is a bit undersized at 5’6, but she won ACC Defender of the year in 2011 and is a two time All-American. She’s likes getting into the attack and is surprisingly great in the air despite her height. This pick adds depth to the Boston backline which it could use.

Colohan, a transfer from Portland is capable of playing either on the backline or in the center of the pitch. She was one of the best long distance shooters in the college game. She’s also proficient at placing set pieces. It will be interesting to see if Colohan can break into the Flash’s starting lineup as they seem to have a solid midfield and defensive core.

This is the first real head scratcher of the draft. Haagsma is the a 5’7 defender from Texas Tech. This is a real reach and Sky Blue may end up regretting this one. There are plenty more better rated defenders still on the board and Sky Blue could have picked Haagsma up in the later round.

Richmond was part of one of the best midfields in the college game in 2013. The Bruin caught the attention of many people during UCLA’s run to their first national championship. Richmond as great size and skill. She’ll be a great addition to the best midfield in the NWSL.

Brigman is a tough defender that capable of covering long areas. She was an important component of the UNC backline as she lead the Tarheels in minutes played as a sophomore and junior. With this pick, Seattle continues to improve the most shaky part of it’s squad. They are definitely drafting to fill needs.

With Aubrey Bledsoe and Erica Owens not declaring for the draft, Kelsey Wys is clearly the best keeper in the draft. This is a great pickup by the Flash who need a backup for one of last year’s rookie sensations, Adrianna Franch. Wys was the keeper for Florida State who as mentioned previously, made three straight runs to the College Cup Final Four. An ACC first team selection in 2012 and second team selection in 2010 and 2013, Wys has been battled tested against some great offensive talent.