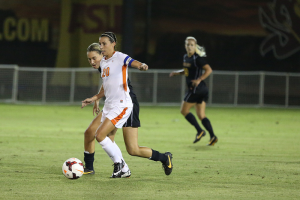 Illinois senior Vanessa DiBernardo is expected to be drafted by the Chicago Red Stars. (Photo Copyright Arianna Grainey for The Equalizer)

PHILADELPHIA — Jennifer Gordon and Steve Bruno, resident college soccer experts at The Equalizer, weighed in with their predictions for the first two rounds of Friday’s NWSL College Draft.

No. 1 – Washington Spirit – Crystal Dunn – The next time we see Washington, it’ll be 25 spots down, so this pick has to pack some real wallup. Dunn’s the best player in the draft and very versatile. Although I’m not sure if they can fit her into their midfield, any team with Dunn on the loose is an immediate offensive power.

No. 2 – Houston Dash – Julie Johnston – Houston doesn’t need another young forward after the addition of Ochs and this draft is dense on forwards all the way through, so the popular opinion of Ohai doesn’t make sense to me. What this class is thin on is quality midfielders and the center of the park for the Dash is sparse, especially in attacking options. Johnston is a goal-scorer and an orchestrator, offers the versatility to play on any line, and has strong leadership qualities. I think she’s pro-caliber out of the box and would make an immediate difference for Waldrum’s squad. (Editor’s note:  per a tweet by Houston’s Fox 26 reporter Mark Berman, Ohai will be the No. 2 pick)

No. 3 – Chicago Red Stars – Vanessa DiBernardo – The heir-apparent to Lori Chalupny’s throne in Lisle, DiBernardo has already played a season with CRS on the hodge-podge 2012 WPSL team. If Johnston’s still available at this point, I think she is better than DiBernardo, but it’s hard to imagine Chicago passing on this local star.

No. 4 – Chicago Red Stars – Kassey Kallman – The Red Stars would add some real muscle and sophistication to the back line with this selection. There’s a possibility if Ohai’s still on the board at this point, they would take her with Press and Tancredi not set to come in till later in the season, but I think Kallman’s the kind of player, like Johnson, that’s ready to start on opening day and should have real staying power as a pro. Doesn’t hurt that former Seminole Taylor Vancil and Casey Short might be whispering in the higher-ups’ ears as well.

No. 5 – FC Kansas City – Mandy Laddish – Laddish may be a bit over-rated at this spot, but FCKC’s is an investment in the future for a team whose bread-and-butter was in the midfield. She does everything right and can attack or hold down the midfield. If they don’t take her here, her former coach grabs her to open the second round.

No. 7 – Seattle Reign FC – Kelsey Wys – I’m not necessarily saying Wys is a lights-out first-rounder, but Seattle needs a quality back-up for Hope Solo who can play at a pro level while their first choice is on international duty. With Aubrey Bledsoe’s decision not to declare, Wys is the de facto numero uno in the ‘keeper class. With two other teams needing ‘keepers that both have picks before Seattle’s number comes up again, they better grab one while they can.

No. 8 – Boston Breakers – Amanda Frisbie – She can attack, she can defend. Boston needs both. It almost makes too much sense.

No. 10 – Houston Dash – Frances Silva – Houston doesn’t have another pick until the fourth round, so they may just take the best player left on the table at this point, but Waldrum’s building a dynamic team and Silva on the right side in midfield or as a right wing makes it even more exhilarating.

No. 11 – Portland Thorns FC (via SRFC/WAS) – Emily Menges – Although this draft is knee-deep in centerbacks, Menges is a former Albertson Fury player, loves to push up and join in with the midfield and is a great passer out of the backfield. Menges won’t last long on Friday and Riley places a premium on his former Fury players, so this will likely be his only chance to get her.

No. 14 – Western New York Flash (via BOS) – Jenna Richmond – Very solid, unselfish, polished midfielder through the center, either attacking or defending. Another player that’s virtually ready to go and one to build around for the future.

No. 16 – FC Kansas City (via Portland) – Morgan Marlborough (M)- (SCU) – Could be another great piece for Vlatko Andonovski to work into the midfield. (Editor’s note: This pick was originally incorrectly denoted as Portland’s.)

No. 17 – Seattle Reign FC (via FCKC) – Michelle Pao – Speedy outside back that can play up top as well.

1) Washington- Crystal Dunn (M/D) (UNC) – Consider this a “Dunn” deal. Washington needs players that are ready to compete at the pro-level immediately and no one is more prepared to do that than Crystal Dunn.

2) Houston- Kealia Ohai (F) (UNC)- Although, Houston has already acquired some offensive firepower, it could definitely use some more. Ohai has already seen time with the U-23 national team, which makes her the perfect target for Randy Waldrum.

4) Chicago- Kassey Kallman (D) (FSU)- Kallman helped anchor the backline of one of the best defensive teams in the college game. Her gritty play will fit in nicely in Chicago’s system.

5) Kansas City- Julie Johnson (D) (SCU) – Kansas City looks to be in the market for a central midfielder as it is looking like Desiree Scott is on her way out of the NWSL. Johnson is the Blues’ best hope of filling this void in the draft.

7) Seattle- Amanda Frisbie (F/D) (Portland)- Head coach Laura Harvey’s made a lot of improvements to her squad in the offseason, but the defense still needs upgraded. Frisbie played forward for the Pilots for 3 years before transitioning to centerback so she also versatile.

9) Western New York- Jazmine Reeves (F) (VT)- It’s quite possible this is a reach, but Reeves had a spectacular year with the Hokies and terrorized backlines all season. Western New York will need some forward or two while Sam Kerr is out for World Cup qualifiers.