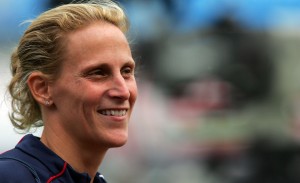 Kristine Lilly, Kate Sobrero Markgraf and Brianna Scurry are among 10 players eligible for the first time for the National Soccer Hall of Fame.

Lilly is the all-time international caps leader with 352 appearances for the United States women from 1987-2010 and won two World Cups.

The last time a woman was inducted to the National Soccer Hall of Fame was 2009, when Joy Fawcett was added.

In order to be eligible for election as a “player,” an individual must be retired for at least three years, but for no more than 10 years and have either payed in at least 20 international games for the U.S., or played at least five seasons in an American first-division professional league and named to a postseason All-League or All-Star team at least once.

Cindy Parlow Cone is in her final year of eligibility before shifting over to the veteran ballot, which comes after a player is retired longer than 10 years.