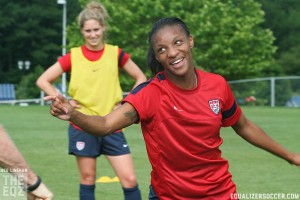 Crystal Dunn is the expected first pick for the Washington Spirit, having seen plenty of national team action in 2013. (Photo copyright Meg Linehan for The Equalizer.)

The 2014 NWSL College Draft class of prospects is loaded with talent, and for an expanding league, that’s good news. Here’s a preview of the top players at each position. The rookie draft will obviously play an important role in filling any remaining gaps in Houston’s roster and any holes created by the expansion draft for other teams.

There’s one important caveat to this year’s loaded draft—a surprising number of top prospects are internationals. Given the three a side international restriction, international rookies will drop lower in the draft than they would have otherwise. Even if a team has an international slot available,  it might decide that drafting an international player isn’t worth it. If a team drafts an international, they’ll obviously have to apply for a visa, which will cost a team both time and money. In other words, a team will only take an international if they’re confident the player’s abilities will translate to the next level.

One important note: Players exiting college must declare for the draft to play in 2014, and the league says they’ll leave the door open for registration until the last possible minute.

International players are denoted by a (*) next to their names.

With Portland’s release of Adelaide Gay and the addition of Houston,  a few teams will be looking for at least a backup keeper. The consensus among avid NCAA fans is that Aubrey Bledsoe is the best keeper available in this year’s draft. Bledsoe was crucial to Wake Forest’s 2013 campaign, especially after the insurmountable loss of all-time leading scorer Katie Stengel mid-season. The four-year starter etched her name into the Demon Deacons’ record books in more than one spot.

Colpitts is probably the most intriguing player on this list. She’s a bit undersized at 5-foot-7-inches and she’s also an international as a Canadian. Those attributes combined hurt her draft stock, however Colpitts made some impressive saves during the Hokies’ run to the Final Four. Santa Clara only managed to convert one of four penalty kicks taken against Colpitts in their  overtime quarterfinal match.

The sometimes goal-anemic NWSL could use some prolific strikers and the 2014 draft looks promising to help with that. This class is chock full of fast, athletic frontrunners. The impressive list of forward prospects is led by two members of the U.S. team that won the  2012 U-20 World Cup: Maya Hayes and Kealia Ohai.  Hayes has proven to be a consistent goal scorer. As a sophomore Hayes led the country with 31 goals. She scored 16 last season despite missing a good chunk of the season with U-20 duty. This past season, Hayes tallied 19 goals.  Ohai, who scored the lone goal of the 2012 U-20 World Cup final, will also come off the board very early.  She led the Tarheels in scoring as a freshman and junior.

While Hayes and Ohai were on everyone’s radar throughout their collegiate careers, Jazmine Reeves wasn’t on many people’s radars before last year. Reeves had a stellar senior campaign at Virginia Tech, notching 11 goals and 6 assists. Reeves’ speed often proved too much for opposing backlines. Reeves scored the first two goals in the Hokies’ surprising 4-2 win over Virginia in the ACC semifinal.

The real wild card in the group is Katie Stengel. Like Hayes and Ohai, Stengel was a member of the 2012 U-20 World Cup team. At 5-foot-8-inches, Stengel is one the best target forwards in this class. She currently holds the Wake Forest record for career goals at 50. Last fall, Stengel’s season ended prematurely when she was diagnosed with blood clots. Recently, Florida Today reported that Stengel is looking to play in Europe. It’s unclear whether Stengel declared for the draft or not. If she has, will a team take a chance on her a la Amber Brooks?

UNC’s Crystal Dunn is the crown jewel of this year’s draft class. Not only does she have eight caps with the full U.S. national team and a MAC Hermann Trophy, but she won ACC defensive player of the year twice and offensive player of the year award once. Considering that the ACC is easily the best conference in the country – the conference provided three of the Final Four participants and all four No. 1 seeds – that’s a superb feat. The question with Dunn is not where she’ll go in the draft (No. 1), but rather where she’ll play. She’s seen as an outside back with the national team but her offensive abilities may put her in a different position for her club team.

Johnston will come off the board quickly, too. She was a two-time first team All-American at Santa Clara as a midfielder and he led Santa Clara in scoring twice. For her country, Johnston suited up as a centerback in 2012 U-20 World Cup. She’ll likely play in the midfield in the NWSL, but versatility is always a plus especially considering NWSL’s roster restrictions.

Kallman is probably the best defender available in the draft. She was a member of the US U-20 World Cup team and has been an important cog in Florida State defense the past four years. The Seminoles relied heavily on their defense to get them to the College Cup final this past season. The team allowed only 16 goals in 28 games.

As a junior, Frisbie scored 12 goals for Portland but she was converted to centerback for her senior year. She thrived on the backline, earning first team All-American honors and a MAC Hermann semifinalist spot. She also finished second in goals scored for the team in the 2013 season. Despite her offensive abilities, she’ll likely line up as a defender. After all,  it’s hard to argue with All-American honors.