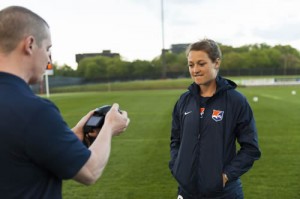 Anyone who remembers the 2011 Western New York Flash can smile at the vision of Marta, Christine Sinclair, and a young Alex Morgan working their magic in the attacking third.  Somewhat less memorable, though no less important, was the midfield where Becky Edwards and Brittany Bock were important elements of the Flash winning WPS in their first season in the top flight.

Friday, the Houston Dash reunited Edwards and Bock when they took the pair as part of a 10-player allotment in the NWSL’s first expansion draft.  Both players come tagged with injury flags, but if healthy they will make the Dash midfield an instant force in the club’s maiden season.

“Love her!” Bock said of Edwards in a text message Friday.  “We have great chemistry on and off the field so I’m really looking forward to being her teammate again.”

“Bock and I have a very good relationship,” Edwards concurred.  “We played together in 2011 and we complement each other very well on the field.”

Bock was injured in Sky Blue FC’s opening match last season, returned in May and after nine minutes she broke her wrist trying to break a fall following a hard challenge.  In 2010 she was in and out of the Washington Freedom lineup due to nagging foot issues.  The foot injuries are behind Bock, who played for Dash coach Randy Waldrum at Notre Dame from 2005-08.

Edwards tore her ACL in training 10 games into the 2013 season for Portland Thorns FC.  She earned another championship honor with the Thorns but was unable to play the rest of the way.  She should be ready to go when the new season rolls around and is looking forward to getting to Houston. 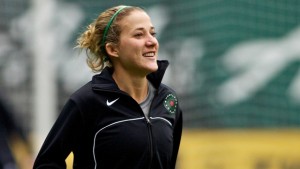 Becky Edwards is aiming for a healthy, productive season in Houston after an ACL injury in 2013. (Photo: Portland Thorns FC)

“I am excited and honored for the opportunity to play for the Dash,” she said.  “The organization and coaching staff seem to be putting together a strong team.  I look forward to working towards winning a championship and playing in front of the fans in Houston.”

Whitney Engen, who was allocated to the Dash last week, also played with Edwards and Bock on the 2011 Flash.

Beyond the potentially dynamic midfield duo, the Dash picked up a solid haul of players in what was a very generous setup for the league’s ninth team.  Mana Shim, Ella Masar, and Danesha Adams are all capable of scoring goals and even if they are all complementary players, not many teams have that many players comfortable in front of goal.  Tiffany McCarty has similar potential but has yet to prove it professionally.

The Dash also grabbed the speedy Meghan Klingenberg, who can play outside midfield or outside back, where she is an attacking force.  Klingenberg is often the quickest player on the pitch.  Lauren Sesselmann, if she stays in NWSL, can play multiple positions in back and Kika Toulouse also adds to the defensive group.

“I’m excited about the players we acquired,” Waldrum said.  “It’s a great blend of positional needs that we have, of youth and athleticism that we want, as well as high character women who will be great role models in our community.

“The roster will continue to unfold in the next week or so, but we obtained a great core of players to begin this process.”

While most players expressed excitement over being taken by the Dash there was also the expected sadness at having to move on from old teams.  Ella Masar posted a lengthy, typed out statement via Twitter and other players had similar reactions.

“I want to thank the entire Sky Blue organization, staff, and fans for everything” Bock said.  “You all have been and are amazing.”