The Lowdown: Waldrum has high hopes for Dash 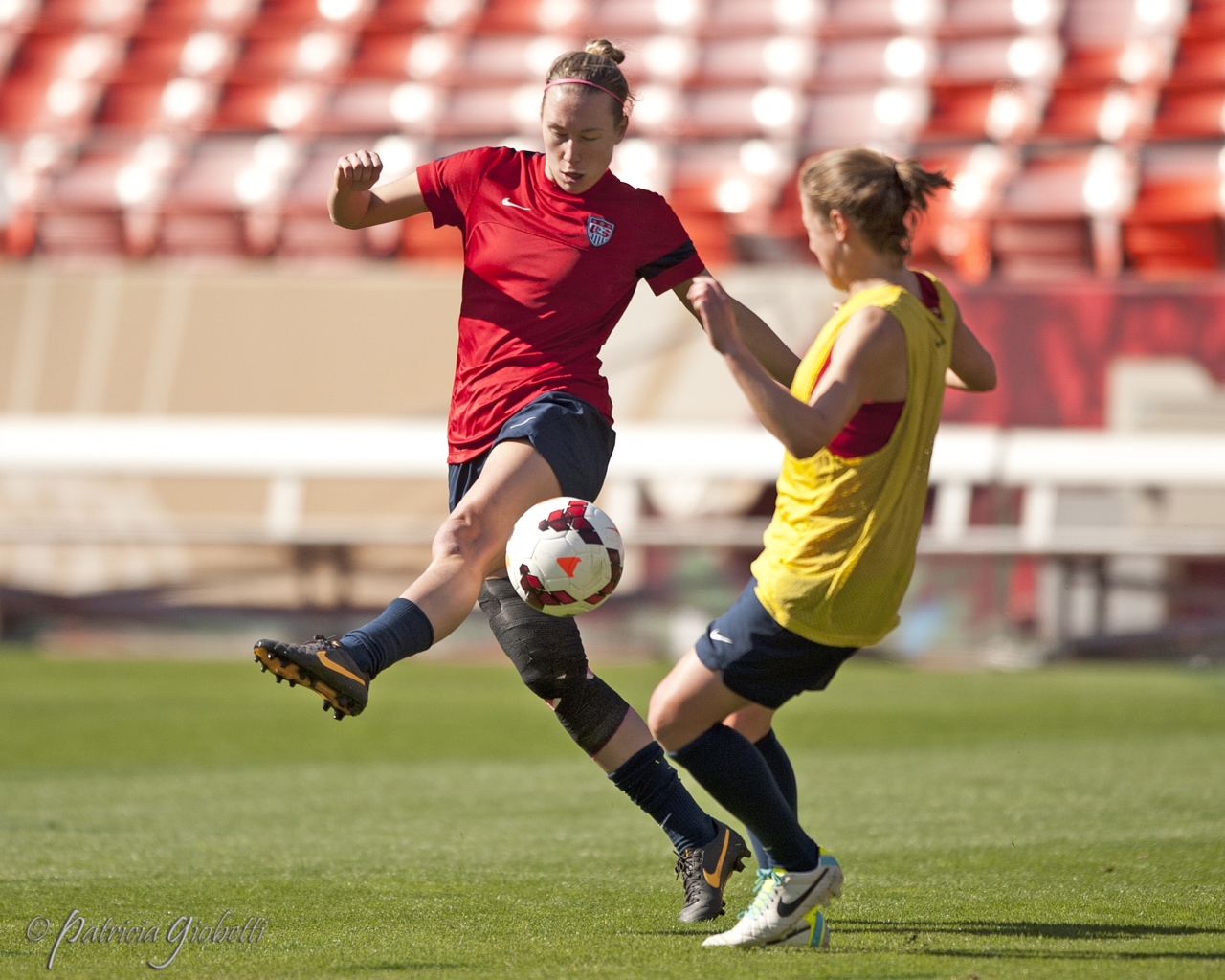 Whitney Engen won a WPS championship with the Flash. She will soon be in Houston to anchor Randy Waldrum's back line. (Photo Copyright Patricia Giobetti for The Equalizer)

“The reason I said that,” Waldrum, speaking about trying to become the best in the world, said after his press conference, “is because I think we need to aspire to be the best we can.  Certainly our first priority is to put a great team together that can compete well in the league and win the league.”

Considering what Waldrum built at Notre Dame it will come as no surprise if he is able to turn the Dash into one of the premier sides on the planet.  Waldrum participated in the College Cup more often than not at Notre Dame—eight times in 15 seasons—and won national championships in 2004 and 2010.  He leaves what he called one of the best women’s college jobs in the country, notoriety that came on the strength of the job Waldrum did.  To call Notre Dame just a top-five women’s program might be an injustice.

“I’ve seen some of the top women’s (professional) clubs from around the world and what they have in terms of facility and support.  The support here from this franchise and the Houston community, this is second to none.  I’m telling you it’s going to be the best arena and everything that’s in the league.  It’s going to be top class.”

As for the Barcelona aspirations Waldrum said: “We (were) very possession oriented at Notre Dame and I want to be that way here.  We want to be a team that presses and puts teams under pressure and try to utilize our advantages here in Houston.  I think that’s the way we’d like it to look.  It’s certainly going to take some time to get the players in here.  It may not happen in the first year because of the available players.  But I took this on to be a long-term project.  I didn’t take it on to be a one year thing.”

So far the Dash have only three players, two of whom will not join the club for preseason.  Whitney Engen will stay in Sweden as long as Tyresö is in the Champions League and Melissa Tancredi, who played for Waldrum at Notre Dame, is finishing up chiropractor school.  The third player is former Hermann Trophy winner Teresa Noyola.

The two drafts are the Expansion Draft this Friday (see details below) and the College Draft the following Friday.  The Dash are likely to emerge from both with quality players.

Waldrum said that his time in college soccer will suit him well when it comes to drafting players and that his biggest learning curve will be making the adjustment from NCAA rules to NWSL rules.

“Once we get on the field, certainly the international game and the professional game is completely different in a lot of aspects from the collegiate game.  I think my experience with the U-23s playing a lot of international games has really help prepare me for that because it’s a much more (tactical) game than you see in the collegiate game.  You have coaches pushing you all the time and pushing you to all the little subtle changes that have to be made and you don’t see that week to week in the college game.  I kind of found that out working with the U-23s and I think it was a good breeding ground for this.  I’m really anxious to get started with that part of it.”

In terms of building teams from the ground up this will not be the first dance for Waldrum.  He founded the women’s soccer program at Baylor that began play in the fall of 1996.  In the first game the team scored 12 goals against Pittsburgh and eventually won 17 games.  Waldrum took Baylor to the 1998 NCAA Tournament before leaving for Notre Dame.  A year later he was close to starting another club from scratch.  The Bay Area CyberRays of the upstart Women’s United Soccer Association (WUSA) approached Waldrum about becoming their first head coach.  He nearly took them up on the offer.

“I was excited as everybody was because that was the first bite of the apple with the women’s league,” Waldrum recalled.  “The reason I say this is the best time for me now versus 15 years ago when that opportunity presented itself is that I had only been at Notre Dame one year.  As a collegiate coach I spent a lot of years working to aspire to get to a Notre Dame and I had only been there one year.  So I was more concerned with the viability of the league and the security of the league.  I didn’t want to be there a year, give up my Notre Dame job, and then a year later turn around and have to go find another college job.”

In the end things worked out well for all parties.  The CyberRays hired Ian Sawyers and won the first WUSA championship.  (Waldrum: “I thought the CyberRays were great.  It didn’t make me have second thoughts.  It just made me excited for them.”)  Waldrum stayed at Notre Dame and built the women’s soccer program into one of the country’s elite.

This time, the allure of what the Dash and their parent club Houston Dynamo had to offer, not the least of which was going to home to Texas where he is expecting his first grandchild, was too much to pass up.

“I’m in a much different place now than I was 15 years ago as a coach.  I’ve been in the college game for 28 years and I think we’ve accomplished a lot at Notre Dame while I’ve been there.  I just felt like the business model for this league with U.S. Soccer’s involvement and with a couple of the MLS teams in it already and I think there will be more to come hopefully as we grow the league, I just felt like it was the right time to do it.”

Waldrum said the most difficult part of leaving Notre Dame was saying good bye to the players.  Because the school has been on winter break while he interviewed for and accepted the Dash job, the announcement had to come via conference call.  Waldrum anticipates a lengthy career in Houston, but also knows the college game is there as a fallback if he needs it.

In case you missed it here is a brief review of the rules for Friday’s expansion draft with a little opinion mixed in for good measure:

— The four playoff teams from last season will be allowed to protect nine players while the non-playoff teams will get to protect 10.  SURVEY SAYS:  Interesting idea but after mulling it over for a day I don’t like it.  Teams are already penalized for being good through the draft order, but they should not lose players for it.  Plus the playoff teams logically have better rosters and so leaving extra players exposed is like a double whammy.

— Any team with more than two U.S. allocated players—everyone besides the Flash—is required to leave one unprotected.  SURVEY SAYS:  I don’t like this one either, but having a federation pay player salaries in a league is unprecedented so maybe this just comes with the territory.

— Non-allocated internationals and players on loan from other leagues, plus any player with contract language limiting movement (don’t ask who, we don’t know) must be protected.  SURVEY SAYS:  Has to be this way, but logically teams should be wanting to protect these players anyway.

— The Dash may select up to 10 total players under the following guidelines.  From each team they may select either a U.S. allocation or two players who are not U.S. allocations.  The total number of allocated players the Dash may select is two from the U.S., one from Canada, and one from Mexico.  Anytime they pick a non-allocated player, that team, along with having their U.S. allocations safe, may pull back one more player.  SURVEY SAYS:  There is no indication the Dash must take from every roster which means the playoff teams could get further hurt by the process.  They could theoretically take two players off all four playoff teams plus one player off two non-playoff teams.  That would give them a pretty good haul of talent and do decent damage to the top teams in NWSL.

— The list of protected and available players will be made public on Wednesday.

— The Boston Breakers have what they are terming a major announcement today.  The Equalizer does not have independent confirmation, but indications point towards a home venue being announced.

— The U.S. national team will play Russia on February 8 at FAU Stadium in Boca Raton.  Tickets go on sale Friday at 10 am EST, one hour before the NWSL Expansion Draft.

— In case you missed it Tom Sermanni named 26 players for training camp beginning Wednesday in Carson, California.  It will be the last camp before the U.S. kicks off 2014 against Canada at Toyota Stadium outside Dallas.

— It will be interesting to see if Desiree Scott’s name shows up on the protected/exposed list.  Will she be exposed to the Dash in the draft?  It’s more a matter of whether FC Kansas City, or NWSL, still consider her under contract.  Scott has signed to play for Notts County in England, a move that is pending an international transfer certificate.  In the meantime Canada reallocated her to Kansas City.  Stay tuned…

USWNT to host Russia in Boca Raton, Fla. on Feb. 8
Breakers head back to Harvard for 2014 season