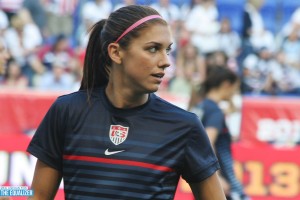 Alex Morgan will have a protective boot on her left foot for "several weeks," it was revealed during a busy week of women's soccer news. (Photo Copyright Meg Linehan for The Equalizer)

Well, that was a whirlwind. NWSL allocations, injuries, the latest U.S. roster, Houston’s first coach and plenty of drama. If you blinked, here is what you missed:

— Fifty players from the United States, Mexico and Canada were allocated to the nine NWSL teams. As first reported by The Equalizer, the Chicago Red Stars won the Christen Press lottery. Press blogged just days before allocation about the pressure U.S. Soccer has put on players to come home and play in the NWSL.

— Who got what they needed out of allocations? Chicago did well, as did Houston, but what about Washington? We break it down here.

— Houston received its first three players in franchise history — Whitney Engen, Teresa Noyola and Melissa Tancredi — and on the same day they named their first coach, Randy Waldrum. As Waldrum told The Equalizer on Friday, the time was right to leave Notre Dame for a new challenge.

— Desiree Scott was allocated on Friday despite English club Notts County announcing they had signed the Canadian destroyer on Thursday. The scenario is confusing, at the least, as there’s an impression within the NWSL that Scott is still under contact. On Sunday, her agent issued a statement that she never signed a contract extension and she is free to sign anywhere because of that.

— Speaking of Canadians: The comeback of Kara Lang has been well-documented, but as Canadian Soccer News reports and we’ve also learned, Lang, who still isn’t fully recovered, turned down the opportunity to play in the league.

— The Western New York Flash were allocated the fewest number of players, four, of all the teams. They once again got only two U.S. players – Carli Lloyd and Abby Wambach – and the organization isn’t happy about the shortage of national team players. Of course they aren’t.

— Alex Morgan’s left ankle injury is worse than U.S. Soccer expected. That seemed obvious when she was seen in a walking boot in the Christmas season and U.S. Soccer said her participation in December’s training camp was limited, but on Friday it was confirmed that Morgan has a stress reaction in her left ankle and will wear a protective boot for “several weeks.” Obviously she won’t participate in the training camp that begins on Jan. 8. Here’s the roster (same link).

— Speaking of the U.S., the Russian federation says they will be playing the Americans in the States twice in February. U.S. Soccer would not confirm any such news.

— Lena Goeßling, one of best players in the world right now (if not the best), signed an extension with VfL Wolfsburg to remain with the club through June 30, 2015, the same day of one of the semifinals of the 2015 World Cup. Goeßling won the treble with Wolfsburg and guided Germany to a Euro 2013 triumph, but somehow isn’t a finalist for FIFA World Player of the Year.

— Amber Brooks signing with Portland Thorns FC was made official on Thursday, a move that was known for several weeks after Brooks left Bayern Munich in early December and Portland did very little to hide that the player they drafted last January was finally coming to Portland. New Thorns coach Paul Riley called Brooks a “massive addition.”

— Beverly Goebel spoke to The Equalizer about her time playing in Japan and making the jump back to the U.S. with Seattle Reign FC.