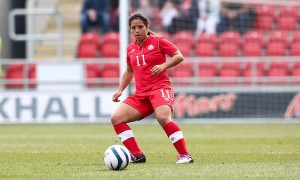 On Thursday it was announced that Canadian midfielder Desiree Scott had signed with Notts County of England’s FAWSL. That seemed to take FC Kansas City and the NWSL by surprise, given that she was an allocated Canadian player in 2013.

Her name appeared on the 2014 NWSL allocation list that was released a day later, adding further confusion. Officially, FC Kansas City has no comment on the matter. Notts County’s official release said the signing was “subject to international clearance.” Reached Sunday, Scott’s agent, Chuck Vine, provided the following statement detailing a contract extension that was never signed by Scott, thus making her free to move to Notts, he says:

Desiree Scott has signed a contract with the Notts County Ladies FC of the FAWSL to play professionally in 2014. In regards to her NWSL Allocation, CSA specifically coach John Herdman’s decision to allocate her (we believe) was based on the assumption she was under contract with the NWSL. Desiree did not sign the contract extension presented to her on 8/9/13. However, the circumstances which her contract extension was presented by FCKC are being investigated by proper authorities. In addition, Desiree has consulted with Coach John Herdman (who per CSA has final say on NWSL matters) and he stated to her he will not prevent her from playing in the FAWSL. Based on her conversation with John,we both expect her allocation will be withdrawn as per her declaration to him of her desire to play in England. Her experience in Kansas City was pleasurable and she wishes the team well.

Desiree is considered a ‘World XI’ caliber player and should be afforded the same opportunities as other elite players from around the world. She like all other players have a very limited window to earn income as a professional athlete. There must be a distinction between national responsibility and financial responsibility without judgement or criticism. Desiree is fully committed to the Canadian Women’s National Team and looks forward to begin training for the upcoming game vs the USA.”

Canadian teammate Lauren Sesselmann’s future still hangs in the balance. Sesselmann played for FC Kansas City in 2013 as well. Vine also represents the Canadian defender and said Sesselmann did not sign the contract extension presented to her on August 9 and has not officially committed to the NWSL, although she is “fully committed” to playing for Canada.

“Lauren Sesselmann has not decided where she will be playing professionally in 2014. She currently has multiple opportunities in several professional leagues and will weigh her options after the upcoming camp/game vs the USA,” Vine said in an issued statement.

An NWSL spokesman did not immediately respond to a request for comment. FC Kansas City declined comment.