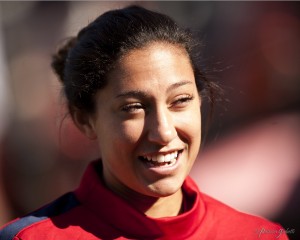 Christen Press says she received a phone call “detailing the reasons” why the USSF wants her playing in the NWSL. (Copyright Patricia Giobetti | http://www.printroom.com/pro/psgiobetti)

Christen Press was the most in-form United States women’s national team striker in 2013, the year that saw the birth of a new pro league, the NWSL. But Press shone in Sweden, claiming the Golden Boot in the Damallsvenskan with 23 goals for Tyresö.

Soon she will be back in the United States, playing in the National Women’s Soccer League, and it’s how and why this development comes about that is of interest.

The ever-honest and refreshing Press wrote in a recent blog that she received a phone call from U.S. Soccer three months ago “detailing the reasons” why U.S. Soccer wanted her to play in the NWSL in 2014. It’s the first significant, tangible evidence from a player of pressure from U.S. Soccer to return home.

As I wrote in December when Amber Brooks ended her time with Bayern Munich to come home and play for Portland Thorns FC, all of this is logical, but there is also a player angle. Players know – without anyone needing to tell them – that it’s easier to be seen when playing close to home. Brooks denied any such pressure from U.S. Soccer, but her Bayern Munich coach, Karin Danner, said it was why Brooks was leaving.

Press is clear in her blog that the USSF wants her and her U.S. teammates in the NWSL in 2014 as the World Cup approaches:

US Soccer is also my employer. And they want their ‘Americans abroad’ to return to the NWSL in 2014 to help promote the league, raise the level, and lure both fans and top international players.”

However, Press says there are a number of reasons to return home and that she also wants to play in the NWSL, just that “it’s a simple matter of when.” That’s consistent with what she said in October, when she first revealed that she will be playing in the NWSL in 2014.

The “when” revolves around Tyresö’s ability to advance in the UEFA Champions League. The quarterfinals are in March, with the final in Lisbon on May 22 in Lisbon. That’s what Press & Co. have their eyes on, and the path has been laid as they face Austrian club NÖSV Neulengbach in the quarterfinals and either Birmingham City or Arsenal in the semifinals, should they advance.

The big question that remains is where in the NWSL Press will play when she comes home. The details of U.S. player allocations for the NWSL likely have been worked out or are close to set, but they still aren’t public. Expansion team Houston Dash seems a natural fit as a squad that currently has zero players, but teams like the Chicago Red Stars and Washington Spirit are owed U.S. internationals. No matter who wins the Press lottery, they’ll become an instant threat offensively.