Nike, US Soccer extend partnership to 2022 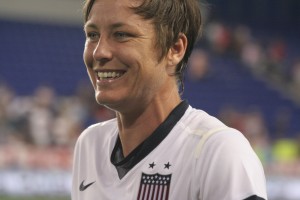 Nike will continue to supply the U.S. kits through at least 2022. (Photo Copyright Meg Linehan for The Equalizer)

Nike and U.S. Soccer have been partners since 1995, and they will continue to be until at least 2022 after Friday’s announcement.

The global sports apparel giant and U.S. Soccer re-upped their agreement to outfit all things U.S. Soccer, from the men’s and women’s national teams to the U.S. Development Academy.

“Nike has been an outstanding partner and shares our long-term vision for progress, innovation and player development,” U.S. Soccer President Sunil Gulati said. “We have enjoyed a tremendous history together that began as we both looked to elevate soccer in this country to new heights, and we look forward to building on our progress.”

Nike of course outfits the National Women’s Soccer League as well, though somehow, a year later and after a full first season of all-Nike gear, that partnership isn’t ‘official.’ Go figure.

Many of U.S. Soccer’s players are also contracted individually with Nike, and the company has been using Alex Morgan in its general cross-sport promotions along with NFL and MLB players, among others. Nike’s most recent advertisement integrates Morgan and Sydney Leroux, who has recently been getting more face-time through the company: