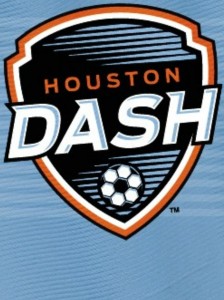 The Houston Dash will debut next April as the 9th NWSL club and first expansion side.

The Houston Dash have been announced as the first NWSL expansion club and will begin play in April, bringing the fledgling league’s enrollment to nine.  The team will be owned and operated by the same group that controls the Houston Dynamo of Major League Soccer.  Cheryl Bailey, the CEO of NWSL, made the announcement at BBVA Compass Stadium where the new team will play its home games.  The announcement was attended by, among others, Houston mayor Annise Parker.

Dynamo president Chris Canetti first spoke to the league as early as July and talks intensified over the last few weeks as details quickly became public.  The team put on a rapid-fire, social media driven, ticket drive and secured deposits for more than 1,000 season tickets.  If they are all converted into full plans for 2014 the Dash will be off and running in the ticket sales department.

BBVA Compass will be downsized to about 7,000 for Dash home matches.  Dynamo matches top out at just over 22,000.

“Our plan would be to sell out those 7,000 seats out on average and fill the capacity that we’ve made available,” Canetti said.  “That’s a lofty goal but that’s something we certainly want to shoot for.”

Canetti added that the possibility exists of having some games televised locally.

The Dash will be the second NWSL team co-owned by an MLS team.  Portland Thorns FC share ownership and staff with the MLS Timbers.

As with most NWSL developments so far the announcement left many details up in the air.  The Dash will get to acquire players from the eight existing clubs through an expansion draft, the details of which appear murky to this point.  As far as the college draft goes the Dash will select 5th in the 1st round.  Soccer by Ives further reported the Dash will hold the top selections in the 2nd and 4th rounds.  Bailey indicated that the Dash are free to sign up to four discovery players, effective immediately.

Bailey also confirmed that the 2014 season will begin the second weekend in April and that the teams will play each other three times for a total of 24 matches–up from 22 in the league’s maiden season.  The championship match will take place August 30.

NWSL scheduled a 7:15 pm EST conference call to discuss the addition of the Dash to NWSL.