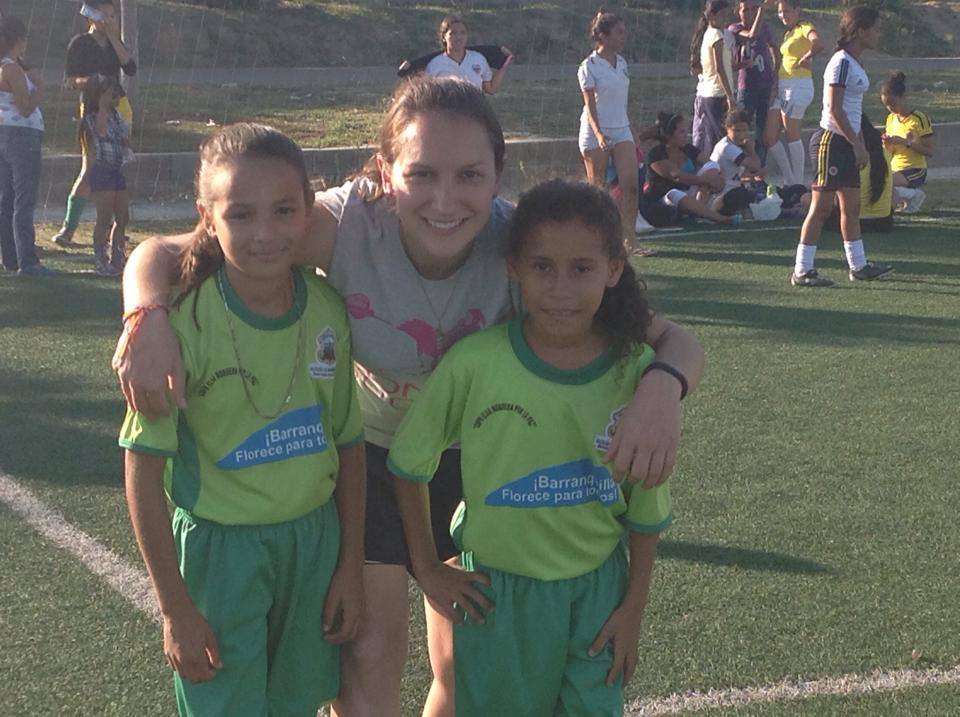 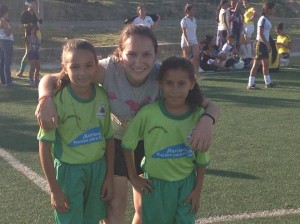 So what do NWSL general managers do in the offseason? If you are Alyse LaHue, along with tirelessly trying to push the Red Stars brand in and around Chicago, you spend a week and a half in Colombia with Monica Gonzalez helping to launch Gonzo Soccer programs in four different cities.

“The state department asked Monica to go down and basically just run a soccer clinic.  She was going to be an ambassador for a week,” LaHue said.  “The U.S. Embassy in Bogota, Colombia, really liked what we were doing and we were lucky enough that someone applied on our behalf for a grant.  We ended up getting it.”

Gonzalez, a former Mexican national team player, took her initial trip to Colombia in April.  She went back with LaHue last month and they hit four additional cities.  Each stop included meetings with coaches that will be helping Colombian girls become better soccer players.

“There are actually two to three more that they would like us to operate in, but we don’t want to stretch the programs too thin with the budget that we have.  We want to make sure we get those (five) up and running properly first.”

The programs began in Chicago, where Gonzalez was trying out for the Red Stars, then of WPS, in 2009.

“I was trying to play on the Red Stars and didn’t make it,” Gonzalez said, adding that she had already moved to Chicago and was stuck without income.  “My fallback 9was) playing for many years and having income and then not having income was always to go to the Hispanic community and do a soccer clinic.  Charge $20 for two days and make $200-$300 and live off that for a couple of weeks.  That’s what I did.

“A week later the indoor owner called and said that all the moms were asking when the next clinic was going to be.  He said we’ll loan you field space to do something for the girls because they’re always here and we don’t have enough girls for a league yet.  So that’s how it started.  It was partly the enthusiasm of the owner of ChiTown Football.”

LaHue, then working as a front office underling for the Red Stars, became Gonzalez’s partner in the venture.

Four years later and Gonzo Soccer landed in Colombia, its third country after the United States and Mexico, where Gonzalez has been a proud member of the women’s national team for time that included the 1999 World Cup and 2004 Olympics. 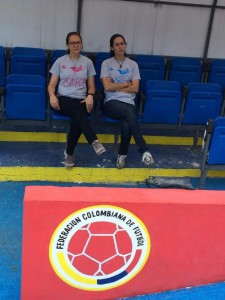 Colombia is slowly making inroads in women’s soccer.  The national team qualified for the most recent World Cup and Olympic tournaments and has emerged as the top continental challenger to Brazil.  “The most consistent Latin American team – I don’t count Brazil because they don’t speak Spanish,” Gonzalez said.

Still Gonzalez says there is a long way to go in breaking down the cultural barriers that hold back young girls in Colombia from aspiring to play soccer.

“I’ve spent a lot of time in Mexico and I know the way the Latin culture is when you talk about machismo or the idea that girls shouldn’t be playing sports.  They’re farther behind.  When we were in Colombia this last time I heard a lot of girls say their parents don’t like them playing sports.  I had a 12-year-old tell me her parents thought she would turn into a lesbian.”

That means unlike in Chicago and Houston, where the Gonzo Soccer programs are able to focus on soccer and then some off-field issues, a good part of the work in Colombia will be convincing girls and their families that soccer is a worthwhile pursuit.

Gonzo Soccer now has two locations in Chicago and another in—ironically enough—Houston.  An Austin location will be operational early next year and there is also a program in Tijuana, Mexico.  LaHue said the long-term vision is to be in every NWSL city.  She also said that while soccer is the main focus it is hardly the only thing taught at the programs that accept girls of all skill levels.

“There is a life skills component,” LaHue said.  “We do that for either 15 minutes or a half hour per session.  We have a list of topics and we just pick a topic every day and sit down with the girls it’s like a ‘girl talk’ type of thing.  We just sit and chat about bullying or about self respect or we pick some very specific micro-topic to discuss with them and let them voice their opinion.”

On the experience of being in Colombia, LaHue was impressed with the diversity of the country.  “It was beautiful, extremely diverse.  It is one of the only countries that is on two different oceans so it is really a unique environment.  We were in four different cities so we were in some hot and dry areas that were more tropical and others that were more mountainous. It’s an extremely beautiful country.”

Next on the agenda is making sure Gonzo Soccer remains in Colombia.  The current grant runs out in a year so securing additional finances is a hot-button issue for LaHue and Gonzalez.

“We’re basically on a one-year grant so Monica and I have to start right away in looking for other options for continuing grants for future years,” LaHue said.  “We want to see it last for a lifetime.  We don’t want it to be a one-year project.”

— Cindy Parlow Cone stepped down as head coach of the Thorns, an announcement that was made official last week.  That continues an odd trend of championship coaches not returning the following season for various reasons.  Of the six championship teams in WUSA and WPS, one team folded (2010 FC Gold Pride), two coaches did not return (2002 Carolina Courage, 2009 Sky BlueFC), two were left without leagues (2003 Washington Freedom, 2011 Western New York Flash), and one team actually returned with its coach (2001 Bay Area CyberRays, Ian Sawyers.)

— As first reported last week by The Equalizer, Paul Riley is the new head coach of the Portland Thorns.  Riley coached the Philadelphia Indepencence in 2010 and 2011, reaching the WPS final and losing both seasons.

— The Breakers began the process of fixing their scoring woes by signing Melissa Ortiz.  The 23-year-old has four goals in 10 appearances for Colombia and is also an American citizen, meaning she will not occupy an international slot.  Ortiz most recently played club soccer in Iceland.

— Where Ortiz plays her home matches remains to be seen.  The Breakers, FC Kansas City, and Sky Blue FC are the teams yet to formally announce a venue for 2014.  Sky Blue has said they are most likely to return to Yurcak Field on the Rutgers campus but it is not certain.

— The 2014 draft will be held Friday, Jan. 17, at the NSCAA convention in Philadelphia and will be open to the public.