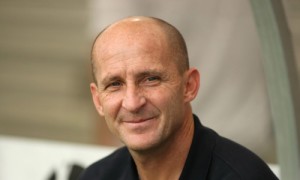 Paul Riley has plenty of challenges in Portland, but he's the perfect man for the Thorns job.

Paul Riley embraces the underdog role. He’s blue collar and he instills that in his teams. He fights for everything and settles for nothing.

Riley, introduced as new Thorns coach on Tuesday after the sudden resignation of Cindy Parlow Cone, took a talented Philadelphia Independence team in WPS and convinced them they were world-beaters. They never had the payroll of FC Gold Pride or the Western New York Flash (Marta alone cost an entire roster), but they had fight and they had belief. It took them to two straight WPS title games in 2010 and 2011.

What Portland Thorns FC lacked through their first season was a little bit of bite and and a lot of cohesion. The talent was always there – and it still is. Alex Morgan and Christine Sinclair together up top is one of the best club pairings of forwards in the world. The midfield, when healthy and available, is plenty talented through Becky Edwards and Tobin Heath alone.

The slightly negative assessment seems odd on paper for a team that won the first-ever NWSL title, garnering all the headlines with star players and a season ticket fan base (about 8,000, with an average attendance of 13,320) that nearly doubles what another team draws on average.

But as Cone reminded everyone in the build-up to 2013, the game isn’t played on paper.

The Thorns never really played to their potential until their two playoff games, which by that point they had to go on the road to win after failing to clinch a home game. Portland showed ambition and fluidity at the tail end of August for the playoffs, but their inconsistency plagued them throughout the regular season: A lazy loss to Chicago to open up June followed by a wild 4-3 win over FC Kansas City and back to troubling ways late in the month in an ugly, visibly frustrating 0-0 draw at Sky Blue FC.

Then there was the 1-1 draw with the Western New York Flash on July 14, the game of the year and a preview of the championship. They couldn’t string together results.

As talented as those Philly teams were, and with all due respect to them, this Portland team packs a far superior punch of star power. With that comes expectations.

By all accounts the Thorns were a wealth of talent that never quite played to their potential in 2013. A talented midfield was too often bypassed in the buildup of attacks and disconnected from Morgan and Sinclair, leaving Morgan to say on June 22, after that uninspiring 0-0 draw in New Jersey, that she felt “alone up top.”

You never quite knew which Portland team was going to show up on any given day, and the disconnect was clear. It was loosely aired out in the open when the now-departed Danielle Foxhoven said that “some” of the Thorns players were playing with urgency in a 3-2 home loss to FC Kansas City on August 4. Jump to 2:54 in the our postgame video:

Increasing possession and limiting long-balls out of the back is a top priority for Riley, who, by all hints dropped by the Thorns, looks like he’ll have Amber Brooks to add to his loaded midfield of Allie Long, Edwards (once healthy), Heath (once back from PSG and healthy), up-and-coming Meleana Shim and Nikki Washington.

And creating that chemistry between his players is a goal of Riley’s for both on and off the field.

“I want this locker room to be like the locker room in Philadelphia,” Riley said Tuesday. “We were the underdogs in Philly; it was a little bit different and we were the expansion team. My first speech to the players was, ‘hey, nobody wanted you and now you’re here with me in Philly and we’ve got nothing to lose. I think this first speech is going to be a little bit different. ‘You’re a championship caliber team. Don’t rest on your laurels; we need to get better, don’t get complacent. We need to train harder, we need to get prepared.’”

Riley has a knack for getting the best of his players, from the likes of Amy Rodriguez and Veronica Boquette – the 2011 WPS MVP that Riley alluded to being a targeted acquisition for Portland – to Leigh Ann Robinson, now on fringes of the U.S. national team, and Icelandic defender Hólmfríður Magnúsdóttir who punched above her weight as Riley’s outside back in Philadelphia.

The 50-year-old Englishman was a finalist for the U.S. and England jobs for a reason. He doesn’t settle, and his players won’t either. Portland’s world-class talent under Riley’s leadership has the makings of something special – something that can keep the Thorns on top in style.

Riley’s task is challenging. He’ll need to strike a balance between giving his team swagger and grit, between blue collar and white. It isn’t that the outlook for the Thorns is negative, it’s that the potential is far greater and the expectations unfairly high for the flag-bearers of the NWSL.

The new Thorns coach said he still hasn’t been to a game in Portland, but from everything he has seen and heard – even in an empty Jeld-Wen Field as he stood there on his recent interview for what he called the league’s “marquee job” – the culture is like no other.

“I’ve been to a lot of stadiums in America and worldwide, and when I stood in the middle of (Jeld-Wen Field), I thought, ‘wow, this could be something special.’”