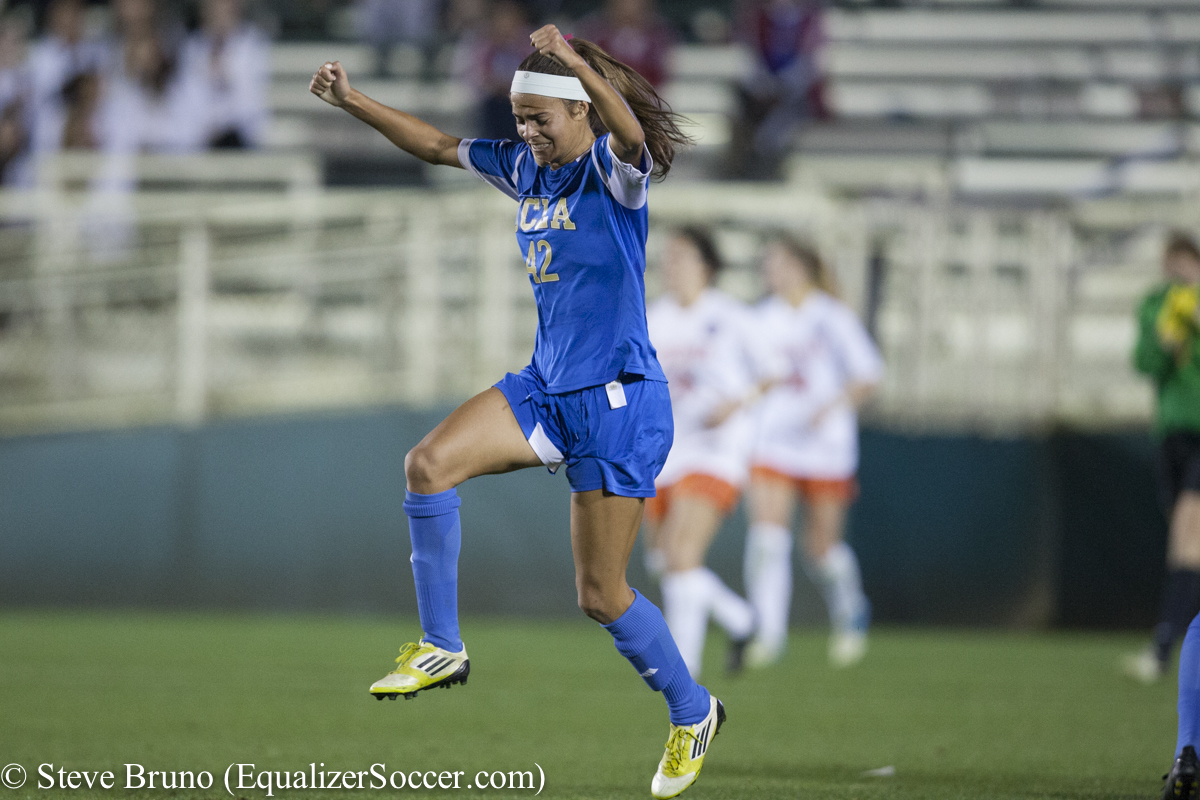 UCLA's Ally Courtnall celebrates her game-tying goal in the 85th minute. The Bruins went on to win in PKs. (Photo Copyright Steve Bruno for The Equalizer)

CARY, N.C. — Fittingly, the two possession-oriented teams couldn’t decide a winner during regulation in their battle of attrition. UCLA advanced to the NCAA championship game with a 4-2 shootout win over No. 1-overall seed Virginia on Friday at WakeMed Soccer Park.

UCLA goalkeeper Katelyn Rowland saved two Virginia PKs — the second on MAC Hermann trophy candidate Morgan Brian — to propel the Bruins into Sunday’s final against Florida State (3 p.m. ET on ESPNU). Either the Seminoles, who beat Virginia Tech 3-2 in the first semifinal, or the Bruins will win their first national title on Sunday.

“We’ve been practicing all year and you make them in practice and you step up there and it’s the national semifinal,” Brian said. “She made a great save. It is a lot of pressure, but at the end — obviously I’d like to have it back, but it’s one of those things you just can’t.”

“It was back-and-forth — a chess match at times,” first-year UCLA coach Amanda Cromwell said. “I just give a lot of credit to the UCLA girls for rising to the occasion. We had a really tough battle with UNC that went to extra time and then today the PKs. So obviously we’ve been through it, we’ve been tried and tested and I’m just really proud of the team right now.” 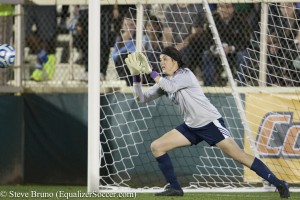 “We’ve been practicing these all year and we have confidence in all our goalies, but in that situation, Jessie has proven to be very capable and we’re very confident in her,” Swanson said. “It’s not something that we just made a decision on randomly…we knew that if we got in that situation we were going to do that.”

Virginia looked on their way to the final midway through the second half. First team All-American UCLA defender Abby Dahlkemper tried to play a back-pass to her goalkeeper in the 73rd minute, but the pass didn’t have enough weight on it and Makenzy Doniak pounced on it, touching the ball around an on-rushing Rowland and guiding it into the back of the net.

It was UCLA’s first breakdown – a surprising lapse for the best defender on the best defense in the country – and it looked like the goal would stand as the game-winner until late.

But Ally Courtnall had other ideas. The fullback pushed forward along with her teammates, looking for an equalizer, and found one in the 85th minute after a good switch of the field from midfielder Sarah Killion. Courtnall nearly skipped the season to focus on track and field, but Cromwell talked her into playing.

It was Killion who nearly put the Bruins ahead just three minutes before Doniak’s tally. Killion lined up a free kick from 20 yards out that went over the wall and on frame, but Stearns made a huge save to deflect the ball over the bar.

New Zealand international Rosie White had a good chance in each half off the bench, but saw each go just high of the bar.

UCLA twice looked like it had the winner in overtime before being denied by the post. Taylor Smith hit the near post in the 102nd minute and Courtnall struck the woodwork a minute later on a scuffed cross. It played out almost exactly like Jamia Fields’ winner for FSU two hours earlier, bouncing off the bar, then off Stearns’ face — but this one did not go into the goal.

The game went to penalty kicks after the scoreless extra time, when White finally got her goal — the clinching PK.

“To be honest I was trying not to think too much,” White said of her game-winning penalty kick.

“I thought our team did extremely well,” Swanson said. “We were right where we wanted to be at the end there. And give them credit. They came back and got a goal and pulled it out in PKs. “If we play this game 10 times, it’s probably going to be like that every time.