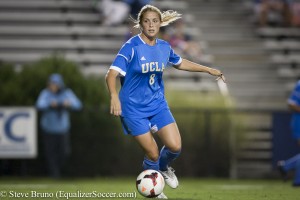 Abby Dahlkemper and UCLA hope to fight off No. 1 Virginia on Friday. (Photo Copyright Steve Bruno for The Equalizer)

This might have been the final if the NCAA fates had been a little kinder. As it is, Friday’s second semifinal matchup features the NSCAA poll’s top two sides squaring off as top-ranked Virginia (24-1), boasting the most bountiful offense in the nation, takes on a second-ranked UCLA (21-1-2) defense that’s best in the land. In between, the midfield for each team is extraordinary, setting the table for a highly-anticipated semifinal clash.

That same midfielder now stands in the way of her alma mater as Cromwell looks to guide her Bruins to the College Cup Final in just her first year as UCLA coach.

Virginia coach Steve Swanson, meanwhile, will already have a leg up on a few of the opposing players on Friday: He coached Bruins Sarah Killion, Sam Mewis, and Caprice Dydasco in 2012 while at the helm of the U.S. U-20 Women’s National Team.

While he may already know what to expect in Friday’s match, here’s a brief rundown of key players to watch on each squad:

Forwards: The Cavalier attack is spearheaded by Makenzy Doniak, a powder keg on offense who improved upon an already-brilliant freshman campaign to become one of the most dominant forwards in the ACC as a sophomore. Doniak scored 19 goals this season, tops in the ACC and eighth-best in the nation. Senior Gloria Douglas partners with Doniak up top, but generally plays on the outskirts in more of a supporting role just above the midfield. Waiting in the wings, though, is super sub Brittany Ratcliffe. A nightmare for defenders, the sophomore generally comes on in relief of Douglas midway through the half and has been just ridiculous off the bench, scoring 12 goals this season, with all but one coming as a substitute. Together, Ratcliffe and Doniak have combined for 40 percent of the Cavs’ goal haul this season.

Darian Jenkins and Taylor Smith form a deadly duo up top for the Bruins. Pac-12 Freshman of the Year Jenkins leads the team with 11 goals, but scored most of those over the first half of the season and hasn’t scored once in the postseason. Smith has picked up the slack, though, and has been on fire over the last month, scoring in five of UCLA’s last six games, including the cherished golden goal against postseason thorn UNC. Not just a goal scorer, the sophomore is an able provider as well with ten assists on the season, second-best on the squad. New Zealand’s Rosie White adds international experience to the offense, but has settled for sub status in the Bruins’ current 4-4-2 after coach Cromwell backed off her initial three-front formation mid-season.

Midfield: The center of the park will be packed with current and future national teamers on Friday. When you talk about Virginia, it usually starts with Morgan Brian. Probably the most qualified candidate for this year’s MAC Hermann award, the junior has had a superlative season for the Cavaliers, scoring 16 goals and assisting on 14. Her 46 points this season are only one away from the school record set by Caroline Miller last season (with Doniak right behind at 44). The players around her, though, offer an infinite variety of passing combinations in a rapid, connect-the-dots whirlwind that often draws comparisons with Spanish standard-setters Barcelona. Danielle Colaprico has evolved into a key table-setter on the left with 13 assists this year and gritty, unsung senior Kate Norbo drives the attack from the right. Protecting the back line is holding midfielder Annie Steinlage, a center back from Michigan State who transferred in her last season and has been a reliable rock amongst UVa’ swiftly-moving offensive stream.

Not to be outdone, UCLA boasts arguably a more star-studded midfield including three former U.S. U-20 players in Samantha Mewis, Sarah Killion and Jenna Richmond. Mewis and Killion are the key directors in the midfield and have accounted for almost a third of UCLA’s assists this season. Kodi Lavrusky has earned a starting spot in the midfield after coming in off the bench as a forward most of the season and the sophomore has already produced some highlight-reel strikes including the game-winner against Stanford.

Defense: The Bruin defense has only given up seven goals in 24 games and have yet to concede one in the postseason. Juniors Abby Dahlkemper and Megan Oyster buoy the best defense in the country and, needless to say, the pair are outstanding. Dahlkemper is a MAC Hermann semifinalist this year and is a commanding presence in the backfield. The junior excels in building the attack as well, with great accuracy and vision from the back to initiate the Bruin attack. The center back pair won’t typically tower over opponents in the way of height, but still manage to dominate throughout the box. On the wings, they have dynamic Hawaiian Caprice Dydasco, a fixture on the right, and Ally Courtnall, another late-season starter who earned the spot after a series of impressive performances off the bench. Both outside backs have the green light to bomb forward and Dydasco is particularly aggressive at getting to her opponent’s 18-yard box to create chaos.

Virginia’s defense makes for the perfect complement to their ferocious offense. While in the attack, which is almost always, the defense transforms into an extra wave of offense to condense the park into a half-field pressure cooker. Center back Emily Sonnet is a converted midfielder with a calm, collected presence on the ball who can ably conduct the assault from the center circle. She partners with senior Shasta Fisher to form an underrated, but accomplished tandem that have allowed a minuscule 59 shots on goal all season, an average of just over two per game. Left back Molly Menchel has probably spent more time this season on the attacking side of the center stripe than in her defensive half and the senior has six goals, four for game-winners, and six assists to show for it. Morgan Stith is a fifth-year senior that may not put up such gaudy numbers from the right side, but she’s often just as eager to venture toward the frontline.

Goalkeepers: Junior Katelyn Rowland has put on an impressive show this season, not just because she’s only allowed six goals in 24 games, but the quality of some of her blocks has been astounding. At 5’11”, Rowland can cover all corners of the frame and does so with surprising mobility and aggression. With just the six goals allowed through 2,104 minutes, Rowland has the best Goals-Against Average in the nation at .257 and, in only her third year, she is already just three shutouts away from tying Val Henderson’s career record at UCLA. Her opposite number on Friday is freshman Morgan Stearns, a keeper who has already displayed maturity and astute decision-making in the goal that belie her rookie status. Stearns supplanted last year’s starter Danielle DeLisle and has already posted the third-lowest GAA in program history with .643.

So what can we expect on Friday? Overall, the Bruins have dominated the series with a 4-1-1 record over UVa, but the last time the two teams met was in 2009, when only fifth-year seniors Stith and Norbo were playing, so that’s hardly a valid metric. You could argue that UCLA have the benefit of a rich postseason pedigree on their side, and they do, but they haven’t been to the Cup since that same 2009 season and no one from this year’s roster was on that team.

In anticipation of a deep postseason run, though, UCLA scheduled matches with three ACC teams in their pre-conference season: North Carolina, Notre Dame and Duke. In the first game against then-No. 1 UNC, the Bruins played somewhat conservatively in what was more a feeling-out kind of game than an early declaration of intent. They lost that match, their only loss of the year, 0-1 off a goal by Crystal Dunn, but UCLA came off much better for the experience, largely dominating Carolina in last weekend’s quarterfinal rematch. The Bruins also won their games against Duke and Notre Dame quite handily, so Cromwell’s team should be as ready as they’ll ever be to face the Cavalier flurry.

Virginia’s only loss of the season came at the hands of a Virginia Tech team that chopped their back line to bits with pace. UCLA features another blitzing forward in Taylor Smith and the sophomore routinely burned the Tar Heels’ backline in much the same way in their quarterfinal victory, scoring the game’s only goal off a breakaway in double-overtime.

Smith will be running straight at a Cavalier defense that has shown porous tendencies this season, too, and UVA hit a rough patch in the middle of the ACC season in which they had to dig out of early deficits in three straight games. Virginia have only given up 15 goals this season, but a third of those goals have come in the first 15 minutes, including early strikes in each of their ACC tournament games, while another five came in the second fifteen minutes. That’s good news for a UCLA side that’s scored six times in the first five minutes this season and netted ten of their 49 goals this season in the first ten minutes of play.

Even if the Bruins are able to take advantage of early unsteadiness while the UVa backline finds their feet, no team has shut Virginia out this season. Only three times have they been held to a single goal this year and even in their lone defeat of the season they still scored twice, so UCLA won’t be able to just score quickly and bunker in. It is likely neither team will see many true goal-scoring opportunities, but Virginia will be expected to monopolize the run of play in their usual inimitable style — it’s just a question of whether they can eventually wear down Dahlkemper and Co. without dropping their guard in the back. The midfield battle will be the critical: Morgan Brian has the hot hand in offense with goals in four straight, but her foil Mewis has been just as clutch through the tournament stretch, notching five assists and one goal in the last four games, so it will be interesting to see which one of these two World-Cup winners will be able to exert their influence the most on the game.

And so the two juggernauts will collide on Friday and, perhaps unfortunately, something will have to give. One team will blink and come away with their second, and final, loss of the season while the other advances with the possibility of winning their first title in program history.

Each team does what it does best better than any other team in the country: Virginia have scored 77 goals while UCLA have only allowed 7. What they don’t do best, though, they still do better than all but a handful of Division I sides, leaving very few, if any, true weaknesses. Whichever way it goes, the semifinal contest should be a classic for the ages.