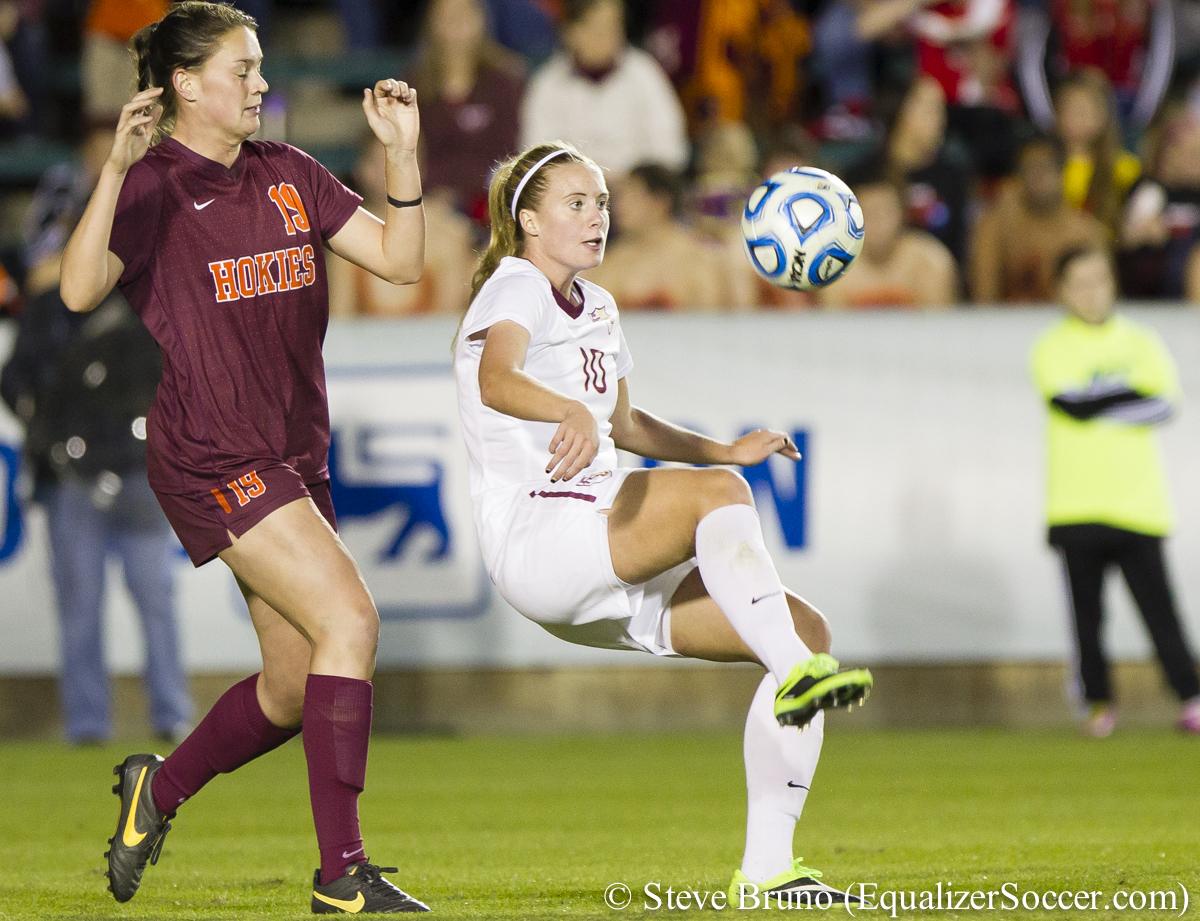 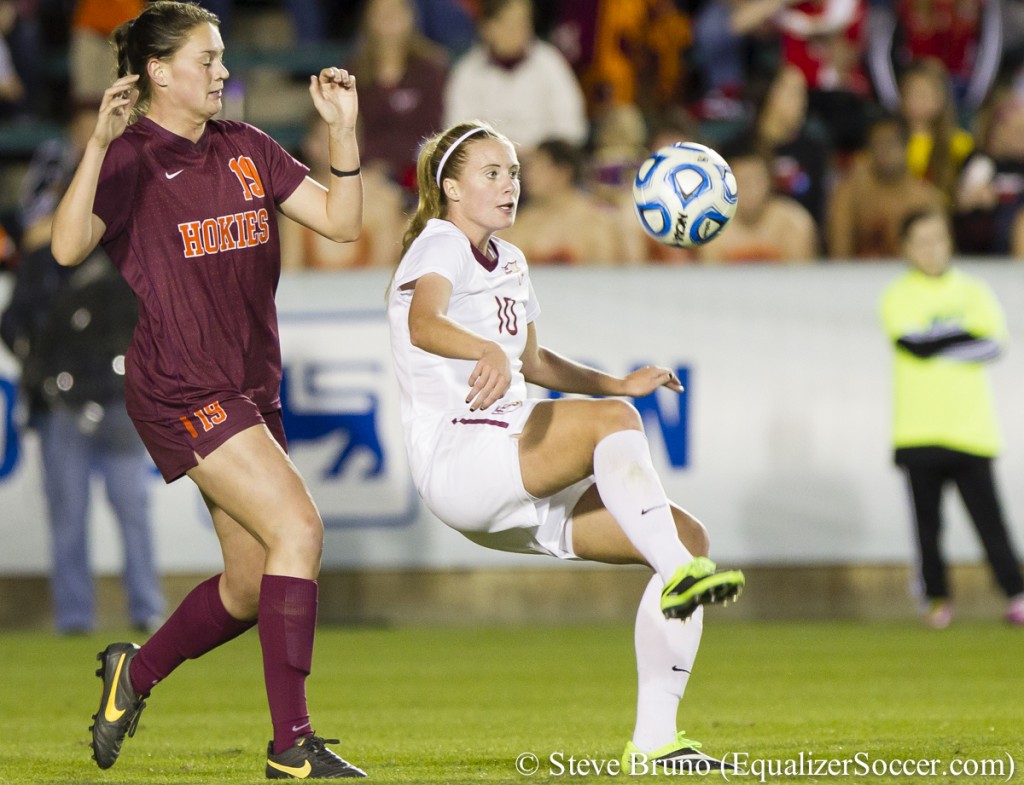 Berglind Thorvaldsdottir of Florida State (right) and Jordan Coburn of Virginia Tech (left) face for the third time this year on Friday in the College Cup semifinals. (Photo Copyright Steve Bruno for The Equalizer)

The four highest-ranked teams in the country survived a 64-team tournament field to converge on Cary, N.C., this weekend for college soccer’s marquee event: The College Cup. The Final Four wouldn’t be the same without an ACC side (2004 is the only year in the tournament’s 32-year history an ACC team has not made it to the semifinals) and the Atlantic Coast Conference will field three challengers in this year’s edition: Virginia, Virginia Tech and Florida State. West coast side UCLA sticks out as the lone Pac-12 entrant, echoing 2011’s Cup clash in which Stanford rose above three ACC contenders to hoist the trophy, which is not, in actuality, a cup.

First up, a look at Friday evening’s twilight fixture:

Is the third time a charm for VaTech? The Seminoles and Hokies have already met twice this season: First, in an ACC regular season matchup in October at Blacksburg and a month ago in the ACC Championship match on Cary’s neutral grounds. Florida State narrowly won both matches, with Dagny Brynjarsdottir scoring all three Seminole goals in a 2-1 victory in the regular season meeting and the 1-0 championship triumph. The Hokies were the better team in the first match, but were unable to capitalize on a number of scoring opportunities, while the return match for the ACC trophy was largely dominated by FSU, whose defense limited Tech to only five shots with two coming in the last five minutes.

While the two teams will be well-acquainted with each other by now, here’s a brief introduction to the major players for each team by position:

Forwards: Florida State coach Mark Krikorian often deploys a single forward up top in a 4-2-3-1 with 5-foot-9-inch Icelander Berglind Thorvaldsdottir generally filling that role, although he will sometimes use a 4-4-2, typically with fellow countrywoman Brynjarsdottir joining her up top. It’s worth noting that Thorvaldsdottir has scored seven times this season, but the redshirt freshman has been mighty quiet of late, riding a ten-game goalless streak that stretches back to the Oct. 20 game against Maryland.

Virginia Tech plays a 4-4-2 with the senior/freshman combo of Jazmine Reeves and Murielle Tiernan the fixtures in attack. Reeves has devastating pace and a killer instinct in front of goal, while Tiernan complements her with a towering 5-foot-11-inch frame, making her the perfect target to corral long balls in the box. Each has proved equally effective as they enter the semifinal tied on goals and assists with 11 and 5 for 27 points. Off the bench, Tech also has the experience of redshirt junior Shannon Mayrose and senior Ashley Manning, both starters last season, who have scored a combined seven goals in relief this season. 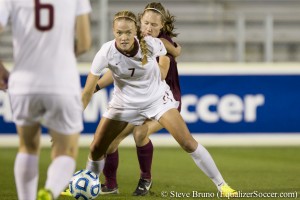 Dagny Brynjarsdottir could be the difference for FSU vs. Virginia Tech once again in the College Cup semifinals. (Photo Copyright Steve Bruno for The Equalizer)

Midfield: Tech typically plays a diamond formation in the center of the park with a pair of 5-foot-10-inch midfielders at the top and bottom in Ashley Meier and Candace Cephers. An All-ACC Second Team selection for her second consecutive season and a starter for the U.S. U-20’s in La Manga, sophomore Meier has eight goals for the Hokies, coincidentally matching her output as a freshman. The left and right sides are covered by Kelsey Loupee and Katie Yensen, respectively, with Loupee’s nine assists leading the team while five of clutch goal-scorer Yensen’s seven goals this season have been game-winners.

FSU plays wider with three up front and two holding. Brynjarsdottir possesses great technical ability in the attacking center midfield position, but, at 5-foot-11, the powerful junior’s greatest influence comes within the 18-yard box, where she’s an unstoppable force both on the ball and in the air (half of her 14 goals this season have come off headers). Carson Pickett and Jamia Fields provide support from the side: Pickett is a battler on the flanks with a screaming left-footed cross while Fields is more of a crafty dribbler driving in from the right. Marta Bakowska-Mathews has been a knockout punch for the team off the bench and the English midfielder is actually the Seminoles’ second-highest scorer despite only starting three games.

Defense: The bread-and-butter of the Seminole side is their defense with ACC Defensive Player of the Year Kassey Kallman and junior Kristin Grubka pairing together as one of the best centerback tandems in the nation. Both are imposing, powerful defenders, but they display surprising speed as well, covering acres of turf while their outside backs get forward. On the left flank, Megan Campbell provides a fierce one-two overlapping punch with Pickett and the Irish international currently leads the team with 11 assists. Her mortar-like throw-ins are worth the price of admission alone, making any sideline opportunity within 25-30 yards of the box a goal-scoring threat. German Isabella Schmid patrols the right side and won’t hesitate to advance beyond the center line as well, having formerly played in the Seminole midfield last season.

Losing three of their four starters from 2012, the Hokies’ back four lacked experience coming into the season, but the defense has punched above its weight all year. With only 19 goals allowed through 26 games, they currently have allowed one goal less than last season’s record-tying low of 20 despite having played six games more. Sophomore Jordan Coburn was the only returning starter from last season’s defense and junior Jodie Zelenky dropped back from her holding midfielder role last season to partner with Coburn in the center for all 26 games. Outside backs Danielle King and Taylor Antolino guard the left and right flanks, respectively, and both backs press into the attack as the opportunity presents itself, scoring a goal each this season while Antolino has four assists as well.

Goalkeepers: Both teams sport senior goalkeepers with the icy confidence that comes from years of experience. Kelsey Wys is having her best season in net for the ‘Noles while Canadian Dayle Colpitts is capping a career as, almost unarguably, the Hokies’ best ever. Wys has played every minute in goal this season, allowing only 13 goals in 26 games for the ninth-best goals-against average in the nation. Colpitts, meanwhile, has established single-season records for the Hokies in shutouts (11), wins (19), and goals-against average (.69) as well as setting career high-water marks in each of those categories. Both keepers are more than capable of commanding their defenses and making extraordinary saves look effortless, but Wys has a definitive edge in big-game experience.

So what’s in store on Friday? Well, Virginia Tech haven’t beaten FSU. Ever. The Seminoles hold a 13-0-1 record over the Hokies with the lone draw coming, ironically, in Cary in 2008’s edition of the ACC Tournament. The semis have been a cruel round, though, for Florida State, who have a 1-5 record in the penultimate stage hanging around their neck, including losses in the two previous cups. VaTech, meanwhile, will be making their debut on the College Cup stage this Friday.

Neither team is going to surprise the other at this point. Tech will obviously be keeping a close eye on Brynjarsdottir, but haven’t found a way to contain her yet as the midfielder has accounted for nine of her team’s 13 total shots against the Hokies across their two meetings. Tech shredded in-state rivals Virginia in the ACC semifinals with a steady diet of speed straight through the Cavalier backline and the Hokies will almost certainly try to establish a quick, direct attack early before FSU can hit their rhythm in possession.

Once they do settle into a groove, the Seminoles are almost maddeningly cagey and patient in their build-up. They love to attack via the wings and press their outside backs forward, whipping balls into the box for imposing Icelandic targets Brynjarsdottir and Thorvaldsdottir. FSU’s tall Icelandic duo have a considerable height advantage over Tech’s 5-foot-8 and 5-foot-6 center backs as well and, were it not for several botched opportunities in the ACC final, they really could have demolished Tech early in the contest.

The Hokies have the ability to battle in the midfield, though, and had great success in the regular season matchup by disrupting FSU’s possession, forcing turnovers and springing counter attacks with Reeves on the end. Coach Chugger Adair will be well aware of Florida State’s penchant for scoring late, too: Brynjarsdottir’s dagger in the 87th minute for the winner against Tech in the regular season is just one of 13 goals the ‘Noles have scored after the 82nd minute to tie or win a game this season.

On paper, the deck seems to be stacked against the Hokies, but you can’t deny a Virginia Tech team that have toppled five Top 20 opponents already this season, including No. 1 Virginia’s only loss, and, for a side that thrives on the underdog role, it’s probably how they want it anyway. It will be difficult for the Hokies to replicate their success, albeit in a losing battle, against the Seminoles in the regular season contest and coach Krikorian’s side adjusted rather well to their shortcomings in that game to control the return matchup. The X-Factor may be how VaTech’s first-Cup enthusiasm and underrated, blue-collar mentality matches up against FSU’s been-there-done-that experience. Ultimately, though, it’s most likely the third time will be the charm for the so-close-yet-so-far Seminoles as they hope their third consecutive College Cup appearance is the one that finally gets the semifinal monkey off their collective backs.