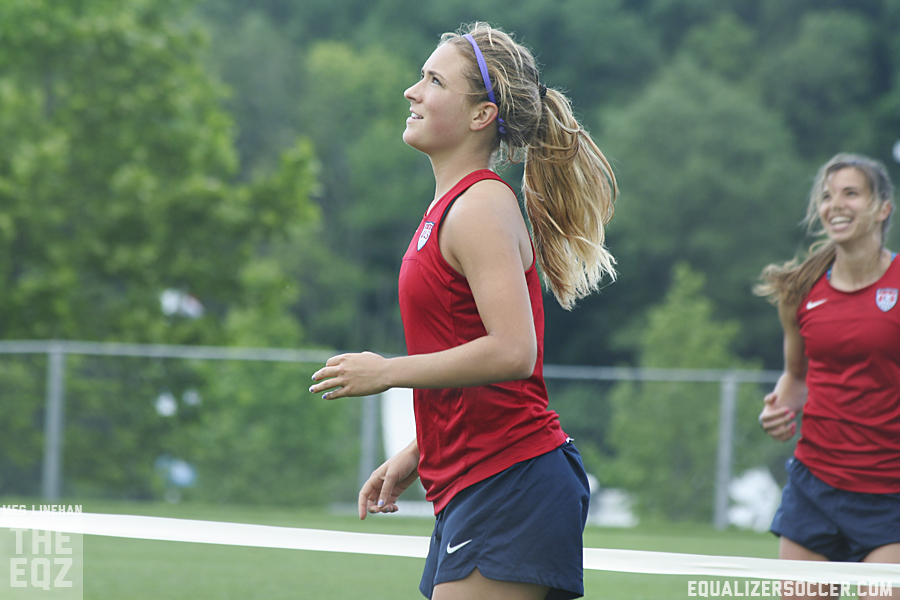 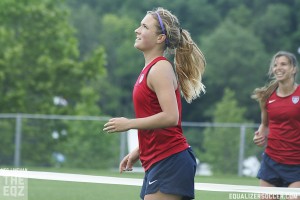 Kristie Mewis was traded twice in what ended up as a busy November in the NWSL. (Photo copyright Meg Linehan for The Equalizer.)

The Lowdown went on hiatus for November and after a slow start to the month the NWSL news came fast and furious in the lead-up to Thanksgiving and the end of the month.  Several high-profile players were involved in trades and Houston Dynamo president Chris Canetti went public with the MLS club’s interest in starting an NWSL side.  A decision is expected this week.

Here is a quick look at some of the hot-button issues of the NWSL offseason.

To expand or not to expand:  Canetti has not been shy when it comes to sharing details about the Dynamo’s interest in entering NWSL.  The club went as far as to ask for $25 refundable season ticket deposits to gauge interest.  Ultimately, the number came in below Canetti’s home run number, but it was rapid-fire research where fans were asked to put up money to support a nameless, faceless team.

The most confounding aspect of this story has been the backlash from NWSL fans who seem to think Houston joining the league in 2014 would be a negative development.  Other than making the roster of teams uneven and creating a necessary increase in weeknight matches, I have yet to hear a single, logical reason why a Dynamo-backed club would be a bad idea.

It was not even four years ago that the Los Angeles Sol folded out of WPS when a prospective ownership group fell through and original owner AEG refused to extend their original agreement of running the team for one year.  That the company that more or less propped up Major League Soccer for a decade turned its back on the women’s game reeked like a death sentence.  Today, Merritt Paulson proudly owns both the Timbers and Thorns and now Canetti is trying to get the Dynamo involved.  The Red Bulls were close to joining as well until Sky Blue elected to remain on their own.

Sure the addition of an expansion team less than seven weeks before the draft is less than perfect timing, but the NWSL is a small league.  Whereas MLS clubs in New York and Orlando will rightly wait until 2015, the level of preparation for the would-be Houston franchise is a fraction of what it would be for those clubs.  If it starts, the team will play at BBVA Compass Stadium where the Dynamo play; they will not have to worry about a television deal or anything close to the level of sponsorship, and there are more than enough players to go around.

Simply put, the participation of more MLS owners is nothing but good for NWSL.  And for those worried that expanding too quickly will sink the league, remember that all three of the WPS expansion clubs were included in the five that were on the roster for the 2012 season that never happened.  Expansion did not kill WPS.  Poor ownership groups—among other things—killed it.

The addition of a ninth team could also tinker with the draft order.  That might wind up being grossly unfair to some teams, especially if the Spirit wind up getting bumped from the No. 1 spot, but it is not even a small concern in the bigger picture of NWSL sustainability.  The NBA used territorial picks until 1966 in order to help ticket sales.  That’s how Wilt Chamberlain wound up in Philadelphia.  The NBA is just fine today.

Allocation:  Another wrinkle in the Houston expansion effort is how allocation would work.  While this is a legitimate concern, it will be no less of a concern if the league expands in 2015, and it also ignores that allocation is already messy among the eight existing teams.  While some have made wholesale changes and others more or less stood pat so far, all of them are wondering just how the 2014 allocation class will look.

So far we know that three allocated Americans from 2013 will continue to be paid by U.S. Soccer.  Keelin Winters signed a standard contract to remain in Seattle and Lori Lindsey has done the same in Washington, but neither will be paid subsidized by the federation in 2014.  Heather Mitts retired before the 2013 season after being allocated to the Breakers.  There was also one open spot from the original set of 23.

That leaves four confirmed slots available for next season.  Yael Averbuch, Meghan Klingenberg, Whitney Engen and Christen Press are expected to join NWSL at some point in 2014, but when and where remains to be seen.  There is also the case of Shannon Boxx, who is pregnant and whose status as a subsidized player remains up in the air.

Canada coach John Herdman has indicated there will be changes to the Canadian allocations but precious little has leaked out about who he intends to send to the U.S.  Seattle Reign defender Emily Zurrer was recently quoted about exploring options in Europe, and Herdman has said he expects Melissa Tancredi to join NWSL immediately after completing chiropractor school sometime in late May or June.

Mexico is expected to reduce their allocation from 16 to eight, though nothing has been made official.

It may seem incidental to lose one allocated Mexican player per team, especially considering that not all of them played last season.  But the NWSL model was deemed effective because of the federations’ willingness to offset player costs.  Losing a Mexican slot will mean the clubs have to pay one additional player.

There is also the matter of how and if a Houston expansion club will receive player allocations.  Will the three federations add enough players to give an expansion club the same benefits as the current eight? And will players willingly make a move from their current setups to play in Houston?

All indications are that allocations will be sorted out before the end of the year.  So while it seems muddled now, we should know where everyone stands at this time next month.

Leroux, Mewis, others on the move:  It seems every time there is an NWSL trade the players on the move pack enough star power to warrant status as biggest blockbuster deal in the short history of the league.  Kristie Mewis was moved twice during November.  First FC Kansas City dealt her to Seattle for Amy Rodriguez.  Mewis was later flipped to the Breakers for Sydney Leroux.  The Reign also sent their 1st and 2nd round picks in the 2015 draft to Boston.

First, Mewis quietly became part of the allocation group last season so she was moved for other allocated players both times.  Second she became expendable in Kansas City when the Blues came to terms with Nikki Krzysik, who sat out 2013 to get married.  Ironically Krzysik’s rights were acquired from the Reign last summer.  FC Kansas City saw it as a backline with Krzysik and having Rodriguez up top as a superior lineup to one with Mewis at left back and a hole up top.

It should not be surprising that the Reign acquired and then traded Mewis.  They have been the busiest team this offseason.  Out are Rodriguez, Emily Van Egmond, Christine Nairn, Kaylyn Kyle, Renae Cuellar, Jessica McDonald, Michelle Betos, plus the rights to Rebecca Moros and Jodie Taylor.  In are Leroux, Mariah Nogueira, Kim Little, Danielle Foxhoven, Carmelina Moscato, and the rights to Nikki Marshall and Alina Garciamendez. It is unclear if the last two on that list will play at all.

The Mewis-Leroux trade generated the most discussion, but it came about largely because both players wanted a move closer to home.  But it leaves the Breakers without a top-notch forward—an area new coach Tom Durkin has said needs an improvement.  The departure of Leroux leaves midfielders Lianne Sanderson and Heather O’Reilly as the top scorers (5) from 2013.

-Even before Houston jumped into the fray, the ETA for a 2014 schedule was not until late December at the earliest.  Major League Soccer released theirs last week, always a prerequisite for the women’s group to finalize things.

-Three teams remain uncertain about where they will play home games in 2014.  The Breakers appear to be looking for an upgrade from Dilboy Stadium, which is without real concessions or an Internet feed and where a project to install temporary stands went horribly wrong.  Sky Blue say they are likely to go back to Yurcak Field after their deal with Red Bull came crashing down, but they added that other options are in play.  FC Kansas City ownership has also stated that the club is exploring other stadium options for 2014.