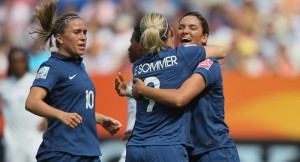 France will reportedly play at the U.S. twice in June.

France national team coach Philippe Bergerôo has told French media that his team will visit the United States in June for a pair of games against Tom Sermanni’s top-ranked side.

Bergerôo, in an interview with French news outlet foot-express.com, said that France had to settle for the Cyprus Cup — where they will play Australia, Scotland and the Netherlands — in March after not being accepted to the Algarve Cup, but that he will test his French team against the world No. 1 United States in a pair of June friendlies stateside.

Contacted on Monday, U.S. Soccer would only confirm that the Jan. 31 game vs. Canada and Algarve Cup in March were set for 2014 as of yet.

Recently, however, France has made significant strides forward toward being an elite team, and the last two meetings between Les Bleues and the Americans were compelling major tournament matches.

France put up a fight against the U.S. in the semifinal of the 2011 World Cup, holding a 1-1 scoreline into the 79th minute. A go-ahead goal from Abby Wambach and a clincher from Alex Morgan ensured France would be sent to the third place match, where they lost to Sweden. The U.S. lost the final to Japan on penalties.

The two teams met again to open the 2012 London Olympics, when France took a shocking 2-0 lead inside 14 minutes, but the Americans were level by halftime through goals from Wambach and Morgan and went on to win 4-2. France would again finish fourth, losing to Canada in stoppage time of the bronze medal match. The U.S. got revenge, beating Japan 2-1 in the final.

Those French failures to reach the podium came under Bruno Bini, who was fired after a quarterfinal exit at Euro 2013 and replaced by Bergerôo, who also said in the above interview that he wants to test his team against Germany.

The U.S. — and most teams, for that matter — will be busy in 2014 preparing for the 2015 World Cup. CONCACAF qualifying will take place in a tournament format sometime later in 2014.