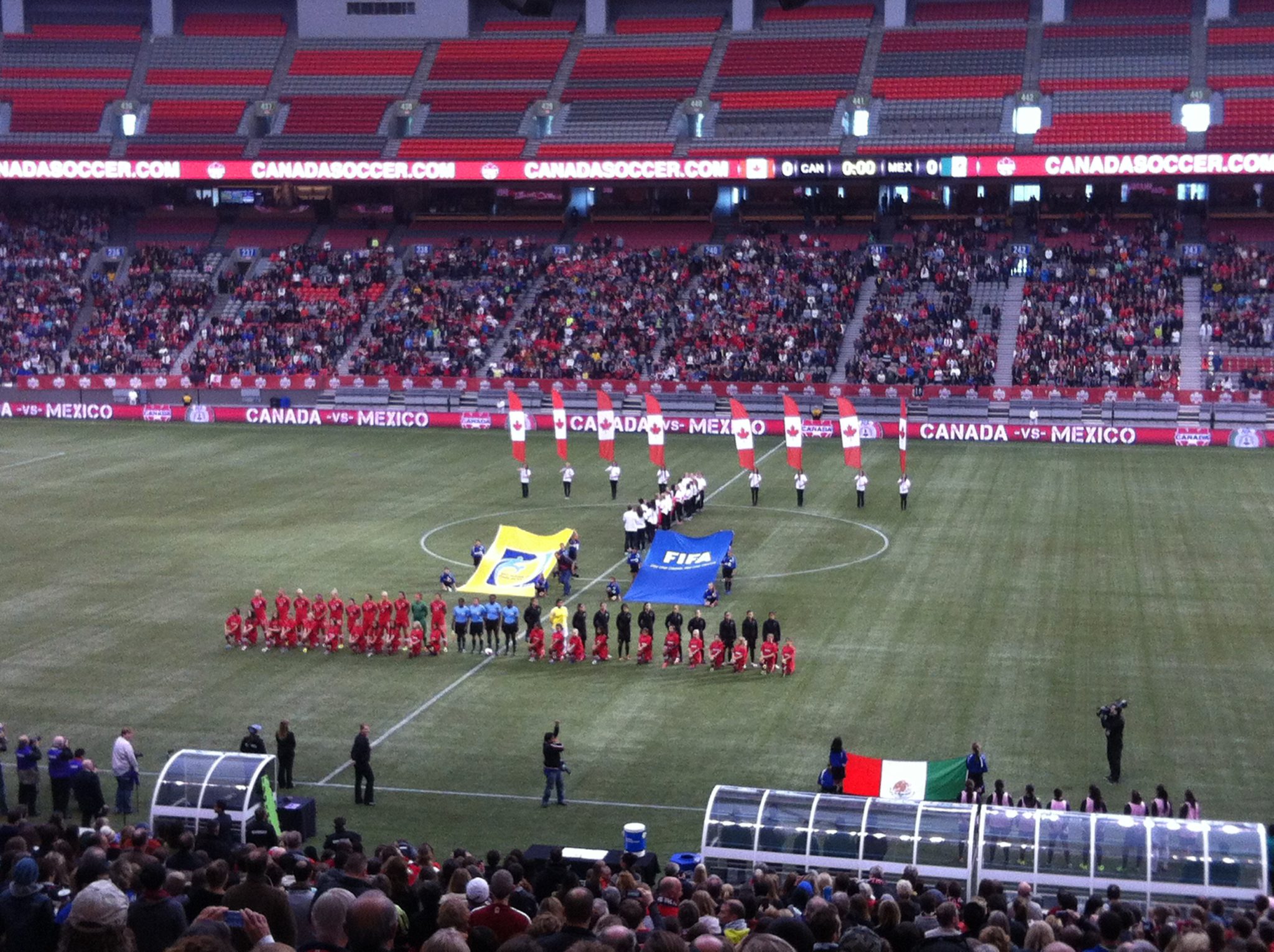 VANCOUVER, British Columbia — Canada and Mexico renewed their rivalry at BC Place Stadium, playing to a scoreless draw on a sunny Sunday afternoon in front of a crowd of 21,217 spectators. The pair of CONCACAF nations had not faced each other since a 3-1 victory sent Canada to the London,Olympics in 2012.

This time around Canada settled for a 0-0 draw, with neither team looking all that dangerous on offense. 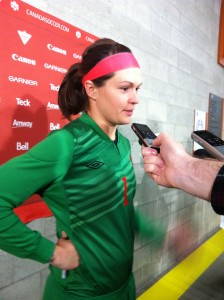 Erin McLeod played in net for the first half of Canada's scoreless draw with Mexico. (Photo Copyright Harjeet Johal for The Equalizer)

Erin McLeod played out of this world in Canada’s most recent match against Korea Republic, and she was asked to come up big once again in the early stages of the first half against Mexico. McLeod made a toe save off of Guadalupe Worbis’ shot on 10 minutes, and again denied Wobris in the 14th minute when Worbis cut around Rhian Wilkinson and fired directly on target. Worbis was a late addition to Leonardo Cuellar’s lineup as Teresa Noyola was ruled out of the match with an injury. McLeod kept her team in the match early.

“I think it’s time for a lot of us older players to step up as leaders,” McLeod said. “We always aim to keep the goals out of the net and that’s my job.”

Canada was thought to have scored a quick first half goal but Brittany Baxter (née Timko) was called offside as she flicked the ball past Mexican goalkeeper Cecilia Santiago. Baxter, who did not play in the NWSL last season, scored in Canada’s 3-0 victory over Korea Republic. Now that she is healthy, Baxter is proving to be a great threat up top alongside Christine Sinclair.

Coach John Herdman was forced into an early substitution as Rhian Wilkinson could not continue, and had to leave the match in the 27th minute. Sura Yekka, a 16-year-old fullback, came on for the Boston Breakers defender. Making only her second appearance at the senior level, Yekka did not look out of place against Mexico. She made a run up the right flank and earned Canada a free kick as she was tripped up by Nayeli Rangel. The 21-year-old Rangel was booked for a yellow card. Canada was unable to find the target on the ensuing free kick. Erin McLeod spoke highly of the teenager following the match.

“I’m very proud of Sura,” McLeod said. “I remember in Edmonton I asked her if she enjoyed the game and she goes, ‘no I didn’t’… I said ‘why?’ And she said, ‘I’m too nervous.’ Today I think she got the nerves out of the way and I thought she had a great performance. She’s 16 years old so I’m very excited, and I think the whole team’s excited to see the future she has.”

With not much happening in the first 45 both teams headed into the interval tied 0-0. 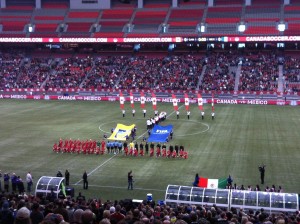 Canada and Mexico finished 0-0 at BC Place on Sunday. (Photo Copyright Harjeet Johal for The Equalizer)

Herdman made a pair of subs before the second half got underway. Karina LeBlanc replaced McLeod in goal, and Marie-Eve Nault came on for Kylla Sjoman. Herdman was not happy with his team’s performance and was critical in his postgame press conference.

“We just ran out of ideas, that first half I felt sorry for people who were watching at home or in the stands,” he said. “It just wasn’t an inspirational exciting performance. I think the players knew at halftime that people had paid some money to watch them play and they had to give a bit more. The ball speed was just so slow and the team in possession was out of position defensively and just wasn’t tight enough. It was almost like we thought this was going to be easy.”

Canada picked up the pace, playing with more urgency and focus in the second half and almost opened the scoring in the 53rd minute. Christine Sinclair was able to get her foot on a ball and she fed Kaylyn Kyle a terrific pass that had Kyle in alone on goal. Santiago came rushing out of her net and was able to deny Kyle with a great save. Canada had two corners after that opportunity but Emily Zurrer and Sinclair could not find net. Sinclair thought it was a mediocre showing for Canada.

Mexico coach Leonardo Cuellar chose to sit both Maribel Dominguez and Veronica Perez for the majority of the match. It wasn’t until well into the second half that Mexico’s all-time leading goal scorer, Dominguez, and Perez entered the field of play. The Western New York Flash player came on in the 63rd minute and the 35-year-old Dominguez was subbed on for Renae Cuellar in the 74th.

Sinclair did her best to find a goal for Canada as she had both her attempts on goal blocked by Mexican defenders in the 77th minute. Sitting on 199 caps, Sinclair fired a low, sinking shot on goal in the 86th minute that was turned aside by a diving Santiago. Mexico’s No. 1 keeper zeroed in on Sinclair and she was simply not going to beaten by Canada’s all-time leading goal scorer.

“It’s always tough not to win at home, and it’s a little disappointing with the result,” Schmidt said. “I thought that we had a lot of good chances but we didn’t score. It’s frustrating in a sense that they played low pressure and it wasn’t very exciting for the fans so that was kind of annoying. We went out and I thought we played really well but that final result was missing.”

Notes: Canada Soccer will make an announcement on Thursday that will make Canada’s participation in a South American tournament next month official. Canada will play Chile, Scotland, and host country Brazil from Dec. 11-22. An update on Rhian Wilkinson was not given postgame.