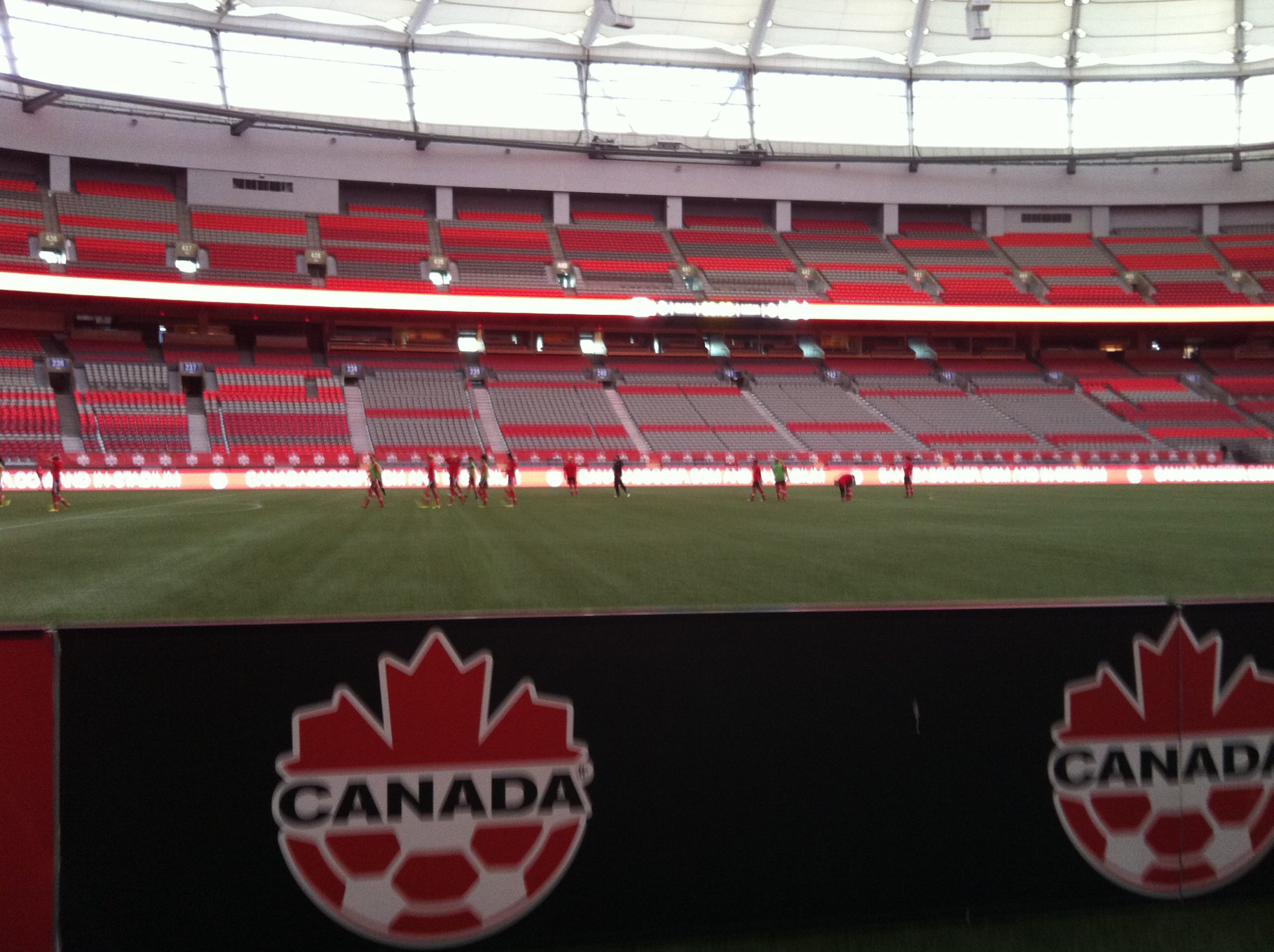 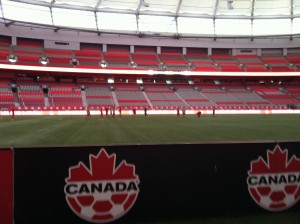 Canada returns to BC Place, where they beat Mexico in Olympic qualifying the last time the two teams met. (Photo Copyright Harjeet Johal for The Equalizer)

VANCOUVER, British Columbia – Canada have been hard at working training in Vancouver this week as they prepare for a friendly against Mexico on Sunday afternoon at BC Place Stadium. These two North American rivals have not faced each other since a trip to the 2012 London Olympics was up for grabs at the 2012 CONCACAF Olympic qualifying tournament in Vancouver.

On January 27, 2012 Canada prevailed with a 3-1 victory thanks to a brace from Christine Sinclair. Six players (Shannon Woeller, Melanie Booth, Candace Chapman, Kelly Parker, Christina Julien, and Melissa Tancredi) who featured in that match for Canada are not involved in the current residency camp. Coach John Herdman has made it clear that he is focused on providing a strong youth movement before the 2015 FIFA Women’s World Cup arrives. Nevertheless, Herdman talked about the experience the last time these two teams met.

“That was a fantastic experience in BC Place. We had 25,000 people watching us qualify for the Olympics, and we just came off a 4-0 loss after with the USA so it was bitter-sweet our last memories here. We walked out of BC Place with an Olympic qualification in our pocket but we had a lot of work to do, and I think we’re at the same stage right now at 2013 looking forward to 2015. I think the big things are hopefully we get a great crowd in there to give us a sense of the atmosphere we’re going to hopefully experience when we hit the final at BC Place in 2015. That’s where the World Cup final is going to be so we want to keep experiencing that stadium, and the crowd.”

[MORE: Herdman not settling for average on Sunday vs. Mexico]

John Herdman has had his group of players training, and working on tactics at the state of the art Fortius Sport and Health Centre in Burnaby since dispatching Korea Republic 3-0 last month in Edmonton, Alberta. Despite a clean sheet and a solid performance against Korea Republic, the Englishman was not happy with his team’s showing last time out and is hoping for a more controlled ball possession oriented style of play this Sunday.

“Canada are renowned for a certain style of play and we’ve been working hard to change that,” Herdman said. “Hopefully we can possess the ball a bit, but we want to win the game so we keep wanting to do little things to improve for 2015. We definitely don’t want to get beat in BC Place in Canada against Mexico. There’s a bitter rivalry there, too.”

Canada had a criteria of six factors that it hoped to achieve vs Korea Republic on October 30. The team only managed to go 1-for-6, and when asked what those factors and team goals might be, Herdman had this to say:

“No (laughs….) they’re our secrets. It’s all about possessing the ball, that’s the bottom line. When you look at what both the men, and the women’s team are trying to achieve, just a team that can possess the ball in the opposition’s half. With that there are certain strategies, tactics, and factors that underpin being able to do those consistently. We’ve just got to keep working on the process, and I think that’s the message I want to get out there. There’s no point in winning games if you’re not achieving certain processes because those wins against better teams they don’t occur.”

Much like the men’s national football team, the Mexico women’s team is also a team that doesn’t know whether they’re coming or going. Twelve Mexican players were allocated to play in the 2013 NWSL season, but only half saw consistent playing time. Mexico is in a clear rebuilding stage, and have not yet made a firm allocation commitment for the league. In their four previous matches Mexico has been out scored 15-0 and have suffered losses to the likes of Denmark, United States, China, and Brazil. Mexico are a team in flux but John Herdman is not counting them out come Sunday.

“I like the Mexicans, I think they’re a good team. They’re a transitional team, very quick on the counter and they’ll have five players attacking very quickly as soon as you turn the ball over. And (Maribel) Dominguez; they’ve actually got a player with a better goal ratio than Sinclair. You can’t write the Mexicans off because (Monica) Ocampo and Dominguez are a formidable partnership.”

Over 20,000 tickets have been sold for Sunday’s match. Fans in attendance should especially look for Canada to use the flanks a lot more than they’re used to seeing. Herdman has said that he wants to see style No. 2 in full action on Sunday and that means more action along the flanks as Canada looks to create offense from the fullbacks.

Notes: Carmelina Moscato is injured and has not practiced this week. Her availability for Sunday has not yet been decided. Christine Sinclair will earn her 199th senior team cap on Sunday.