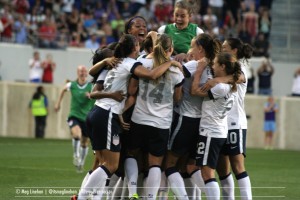 The U.S. women will play Canada on Jan. 31 in Frisco, Texas. (Photo copyright Meg Linehan for The Equalizer)

The U.S. women will open their 2014 calendar on Jan. 31 against Canada at Toyota Stadium in Frisco, Texas, outside of Dallas, at 9 p.m. ET on Fox Sports 1.

The match was previously announced by Canada and confirmed by U.S. Soccer. Canada will host the United States in a return leg sometime later in 2014. The United States last played in Frisco on Feb. 11, 2012, in front of 20,677 fans, when Alex Morgan scored twice late to lift the Americans past New Zealand, 2-1. Canada hosted the U.S. in June, losing 3-0 in Toronto.

“It’s great to start the year with a game that is going to be a real test for us and a game that is always highly competitive,” U.S. coach Tom Sermanni said. “It’s a friendly game, but one that’s meaningful for both teams, and it’s an excellent first match in a year that will end with World Cup qualifying. In 2014, it will be important to play as many quality opponents as possible.”

Jan. 31 is the Friday night before Super Bowl XLVIII, played on Fox in New Jersey. This game, along with several other sporting events on Fox Sports, is part of the build-up to the NFL’s annual grand championship. Fox hopes to hype the event even more this year with it being a ‘New York’ Super Bowl.

Texas hosted the U.S. women for the first time on May 19, 1995, when the Americans dominated Canada at Franklin Field in Dallas, winning 9-1.

Canada rolls past S. Korea behind McLeod, Sinclair
Herdman not settling for average vs. Mexico