Paul Riley is out of the running for the England job.

Paul Riley is out of the running for the England women’s manager job, according a report, and Bristol Academy’s Mark Sampson is a “serious contender” to succeed Hope Powell, along with Powell’s former assistant, Brent Hills.

This all comes from a report out of the Telegraph, which also revealed that American coaches Tony DiCicco and Jill Ellis were candidates earlier in the process.

Riley was also one of the finalists for the United States job last year, which went to Tom Sermanni. DiCicco was in the running for that as well and Ellis was the interim coach between Pia Sundhage and Sermanni.

Hills is currently the interim manager as England goes through UEFA 2015 World Cup qualifying and won all four games at the helm.

Sampson just guided Bristol to second place in the FAWSL, qualifying them for the 2014-15 UEFA Women’s Champions League.

According to the Telegraph, Riley was flown to England to discuss the job, but was told over the phone on Sunday that he wouldn’t get the job because he doesn’t have a UEFA A coaching license.

Ellis is quoted as having had “preliminary discussions” but is no longer involved in the process, and DiCicco said he pulled his name out of contention.

The FA expects to make a decision on its next women’s national team manager by the end of the year. 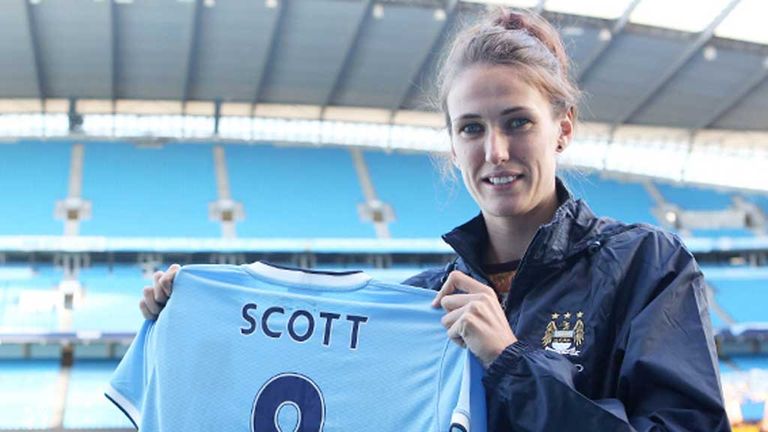 England midfielder Jill Scott has made the move to Manchester City Ladies after seven years with Everton.

City’s first FA Women’s Super League season is 2014, and they are expected to make a splash of signings. U.S. goalkeeper Hope Solo was a rumored target, but Seattle Reign coach and GM Laura Harvey says Solo will stay in the Pacific Northwest.

“What attracted me most is the whole professionalism of the club – the fact that they train frequently – and the facilities. I feel like the club have a plan to make themselves one of the best teams in the league eventually,” Scott said.

Scott has appeared for England 74 times, in addition to a quarterfinals run at the 2012 Olympics with Great Britain.