‘Not a freshman’: Andrews shines beyond her years 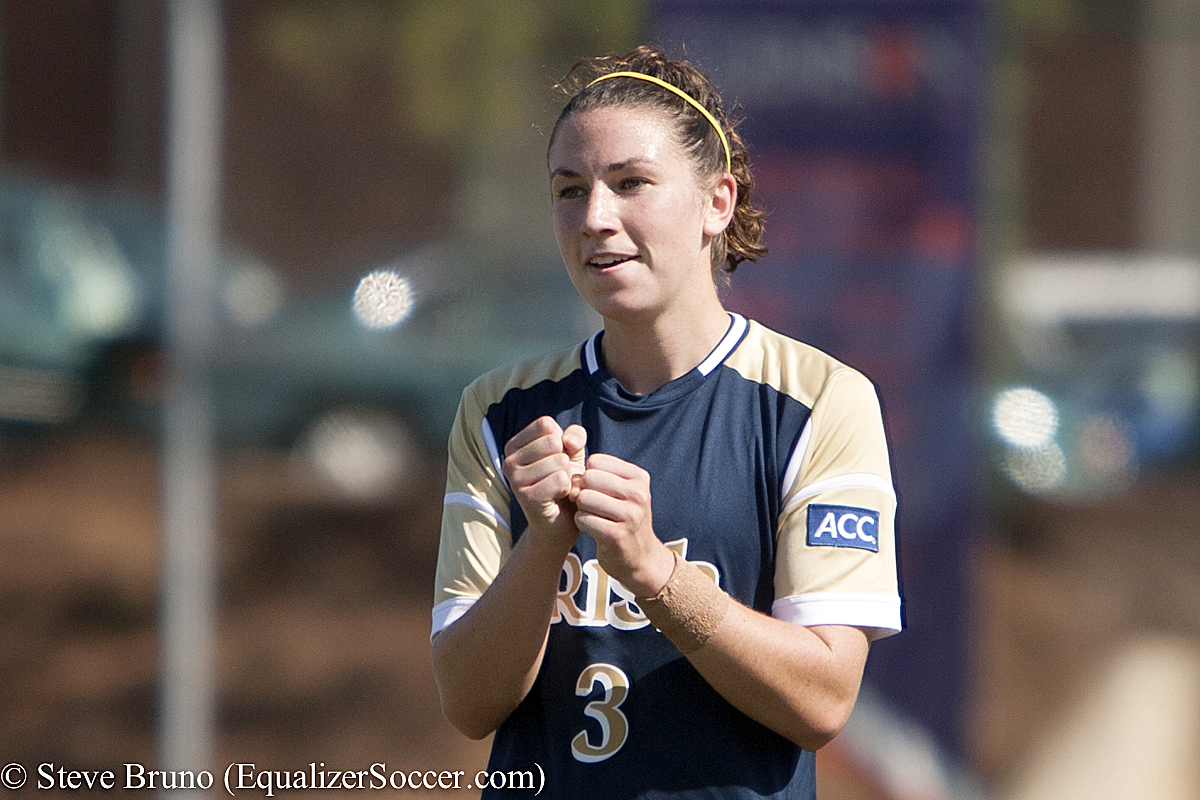 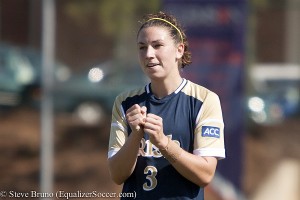 Morgan Andrews has five goals and five assists for Notre Dame this season, second on the team in each category. (Photo Copyright Steve Bruno for The Equalizer)

It’s not difficult to pick freshman Morgan Andrews out amongst her Notre Dame teammates.  While everyone else patiently awaits the opening kickoff, the Irish rookie is a beehive of activity before the game. Whether she’s anxiously bouncing up and down during the pregame huddle or dancing on the field, or whipping her hair around to an unseen concert in her head, it often seems as if Andrews overflows with an energy she can barely contain.

Perhaps she’s overcome by the excitement of finally playing in the ACC with a chance to compete with nation’s best in arguably the toughest conference in college soccer.

“Personally, it’s the league I’ve always wanted to play in,” Andrews says. “I’ve been dreaming about it since I was a little girl.”

Or maybe it’s simply her silly nature, a side Irish sophomore Cari Roccaro discovered only recently despite having known her teammate since their early teens.

“I never knew how goofy she was,” Roccaro says, glancing over her shoulder in case her midfield partner is within earshot. “She’s such a goofball with her dance moves and her singing. She thinks I don’t notice, but when she’s singing in the locker room or on the field I’m always like ‘Aww, she’s such a clown!’”

Whatever the reason, Andrews’ giddiness takes a back seat as the starting whistle blows, replaced by the furrowed brow of intensity and concentration.

It’s not surprising considering what’s expected of the No. 1 recruit in the nation. Coming into her freshman year at Notre Dame, Andrews had already been in the national attention as captain of the U.S. U-17 national team in their 2012 World Cup campaign and as a two-time Gatorade High School Player of the Year for girls’ soccer, the only repeat winner in the award’s 16-year history.

Now that she’s playing in one of the most renowned college programs in the country, fans, coaches and players all have a spotlight trained on Andrews, waiting to see how the 18-year-old rookie phenom will perform in college soccer’s top conference.

Even her teammates have set the bar high for Andrews:

“I obviously had the highest expectations for her coming in because I’ve known her since I was 13,” Roccaro says. “We played on the regional team together and I played against her in club, too. I watched her play in the U-17 qualifying and (saw) how she was able to lead that team, so I expected her to be able to come in and have a huge impact on our team.”

Andrews says that despite the challenges of transitioning to college life and college soccer, she didn’t find it hard to acclimate herself to the new environment in general thanks to her fellow Irish.

“My teammates made it easy for me to adapt because they’re so supportive and they’re just great players to be around and they helped me out a lot.”

On the field, though, Andrews says there was one key factor which even playing for the national team hadn’t quite prepared her:

“I think one thing is just the speed of play. It’s so much faster than high school. It’s faster than club and, at times, it can be faster and more aggressive than the international level.”

“I think it took her a few weeks into the college season to really catch up to the pace of the college game and the physicality of the college game,” Notre Dame head coach Randy Waldrum says of Andrews’ evolution over the first three months. “Just the training rhythm and the cycle and going to class and all those things that a student-athlete in a college has now, but once she got past the first couple of weeks I think she’s been everything that we expected her to be and she’s been great for us this year.”

For Notre Dame, “great” can be quantified partly by her five goals and five assists this season—second among the team in each category—including the game-winning score off a header against North Carolina in September, which vanquished the reigning national champs and top-ranked team in the country at the time.

Andrews’ success has come not only from adapting to the pace of the college game, but from relearning her role as a key component with a new team and on a new stage:

“The college game is a completely different game in itself. I think a big thing for me was learning to be aggressive and learning to assert myself on the field and be loud and know that it doesn’t matter if I’m a freshman, it doesn’t matter what grade I’m in, I just have to be strong and keep fighting like everyone else on my team.” 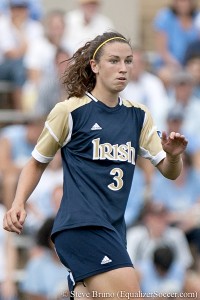 The rookie moniker is one Waldrum is also quick to dismiss.  “She’s not a freshman. She’s a veteran player and she’s as comfortable with the ball as any player we have.”

Familiarity with the ball no doubt comes when one has played as far back as one can remember. The youngest of three siblings, Andrews’ soccer seeds were planted at a very young age by brothers Matt and Mike.

“I have two older brothers that are very athletic and they played soccer growing up. They faded away from the game as they grew up, but it was just kind of something I fell in love with. Everybody has a passion and soccer was definitely mine.”

Having already played for several years by the age of 10, Andrews joined FC Stars of Massachusetts, an organization that also developed top ACC talents Stephanie McCaffrey and Hayley Brock.

“A big thing for me was working with my club team and Jason Dewhurst back home. (He’s a) great coach and he really helped me find the important values of soccer.”

Dewhurst, the director of coaching at FC Stars, is a former professional player from the UK who moved to the U.S. and founded his youth system. Dewhurst says the “important values” his FC Stars organization stresses are “the importance of the team and to never give up.”

“In every game (or) practice there will be ups and downs, and we encourage players to deal with this in a positive way. We explain that ups and downs will also happen in everyday life and that you need to bounce back from them, which hopefully teaches them life lessons. We stress the importance of practicing how you would play in a game. This means a very competitive practice environment which improves each player.”

Dewhurst watched Andrews develop over the course of her eight years with FC Stars. Despite a one-hour trip from New Hampshire for each practice or game, Andrews thrived with the organization, winning numerous trophies with her teams, both at the state and national levels.

“Her drive to succeed was fantastic. She wants to be the best and works so hard to try and achieve that,” he said. “She lives and breathes soccer 24 hours a day. Another thing about Morgan is she is such a role model within our club. This is not only because of her success but also because of her humbleness and willingness to give back. She would come early to practice at any age and just join in whatever team was practicing.  As she got older, she started to come early and join in with the younger teams and lead by example. She just wanted to play and spend time with the younger players.”

Possessing a valuable blend of tangible and intangible qualities that led to success with her club teams, Andrews began to draw the attention of the U.S. national team coaches, beginning as a 13-year-old with the U-14 team. Dewhurst says she already demonstrated a technical and tactical skill beyond her years, so the two concentrated on her decision-making in the run of play as a way to make her more successful with the national teams.

“Probably the biggest thing we talked about was making the right decisions on the field based on what the games or practices with the national team dictated,” Dewhurst says. “For example, if the speed of the game required Morgan to play 1-and 2-touch passing and she dribbled, then that would not be the right choice.  We discussed that making the right decision at that level (and any level) makes good players stand out.”

Throughout the majority of her tenure with the team, Andrews played two years ahead until she reached the club’s highest level as a 15-year-old on the U18 squad, a factor which her former coach points to as a key contributor in her maturation. As a high school junior, she earned a spot in the U-23 training camp, playing with college upperclassmen five and six years her senior.

“She was by far the youngest player going into camp,” Dewhurst said of Andrews’ call-up on that occasion. “Her maturity dealing with this was absolutely unbelievable to me.“

In 2012, as a rising high school senior, she played for the New England Mutiny, competing among dispersed WPS veterans in the hodgepodge WPSL Elite. The progressive experiences have set Andrews up to succeed at each level, even as she adapts to the college game and the intense, ruthless competition of the ACC.

Now at a university 850 miles from her hometown, Andrews plots her rise through the college ranks. She and her coach each have ideas on things she can do to improve her game and take it to the proverbial “next level,” although they may not necessarily be on the same page just yet.

“She’s going to have to get better defensively,” Waldrum says. “I think she’s always been kind of the offensive threat of all of her teams and she’s kind of been that star player that they look to to score goals and create and I think… like most players coming out that are in that role, they don’t know how to defend well and so we have to get her better defensively and I think, once she gets that discipline to do it… she’s going to be a great player, not only for us but for the future national teams as well.”

Andrews’ thinking, however, is a little more goal-oriented:

“My part of the game is the passing game. I think something that I really need to work on is just turning and attacking, because sometimes your team just needs you to score goals and I think I need to take more responsibility on the attacking end.”

As coach and player hammer those points out over the next four years, Andrews hopes to keep her name in the national team conversation, something she’s already done through every developmental stage of the program, while hoping to add to Notre Dame’s three national championships.

Academically, Andrews has already declared a major that should keep her close to sports year ‘round.

“I will be majoring in Film, Television and Theater with minors in Fine Arts and Journalism. I really want to be either a sports broadcaster or sports reporter. It’s always been kind of my passion, watching ESPN with my dad or my brothers.”

With a shot at the full national team and the advent of the NWSL, though, another avenue exists for the potential future star, an opportunity which she readily embraces.

“A big thing for me is I want to find myself on the 2015 World Cup roster and 2016 Olympic roster and, also, I hope to play professional some day. That’s really my main goal. It’s always been a dream of mine.”

The recently-crowned ACC Freshman of the Year has already distinguished herself as an individual force in the conference and, if the ACC coaches’ opinions are any indication, the newcomer has taken a big step toward realizing those lofty dreams.