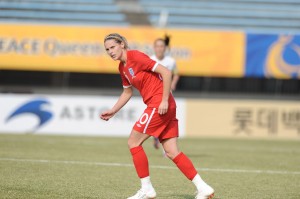 Kelly Smith is one of the best women’s soccer players ever. That wasn’t always abundantly clear to the untrained eye, given her injury struggles over her entire career — especially the last few years — having broken her leg multiple times. Smith was always overshadowed, by top American stars of several generations and primarily by Marta, who has dominated the headlines for the last decade.

Smith’s struggles are well documented — from the injuries, to her battles with alcoholism during the Women’s United Soccer Association days. But her playmaking was brilliant, last seen on American shores with the Boston Breakers in WPS from 2009-11.

The 35-year-old Smith is already a legend, and that’s how she’ll be remembered whenever she decides to retire. And she says that won’t be happening right now.

Smith tells UEFA.com’s Paul Saffer that she has her mind set on a full comeback for Arsenal. Smith has played only twice this year for the Gunners after re-injuring herself in a UEFA Champions League quarterfinal in the spring. She made her second appearance this past weekend, coming off the bench in the 76th minute in a 3-0 first leg win over Glasgow City in the Round of 16. Smith made only two appearances for England this year, twice off the bench at EURO 2013, where England failed to get out of the group, finishing last of the 12 teams.

Smith is also an assistant coach to Arsenal manager Shelley Kerr as Smith continues to play. And play on she will, for now.

“I still feel good after coming back from my injury,” Smith said. “I’ve worked hard again, trying to get back, and I’ve managed to do it before the season’s out. So I’m going to work hard still in the off-season and try and come back stronger. I’ll see how I feel. If I get another long-term injury I’ll have to address it as I can’t keep doing it at 35 years old.”

Arsenal failed to win the FAWSL this year after winning nine straight league titles in England. Liverpool won their first title, while Bristol finished second to leave Arsenal out of the Champions League spot. This campaign could be Smith’s last chance at Champions League glory, and it looks like she’ll be on the bench Wednesday for the second leg. Smith has many titles to her name from her Arsenal days, including the 2006-07 quadruple season, but a player as talented as her — one who has endured so much in her career — deserves to go out on a higher note than the injury-filled 2013 she has gone through.