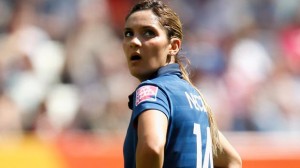 Louisa Necib lifted Lyon to a 1-0 aggregate lead over Potsdam.

Louisa Necib scored a critical late goal to give Lyon a 1-0 aggregate lead over Turbine Potsdam on Sunday in Germany, setting up an enticing second leg.

Necib collected a through ball from Laëtitia Tonazzi and made her way around Potsdam goalkeeper Ann-Katrin Berger to give Lyon the advantage as Necib & Co. look to make a fifth straight UEFA Champions League final.

Meanwhile, Barcelona beat Zurich 3-0 at home off a uniquely bookmarked brace from Sonia Bermúdez and another goal from captain Vicky Losado. Bermúdez scored at each end of the game, in the 1st and 90th minutes, to help Barcelona to a nice cushion heading into Leg 2 in Switzerland.

And Austrian club Neulengbach are well on their way to the quarterfinals after defeating Turkish side Konak Belediyespor behind captain Nina Burger’s hat trick.

Here are all of the results from Saturday’s Round of 16 first leg games. The second legs play out on Wednesday and Thursday.