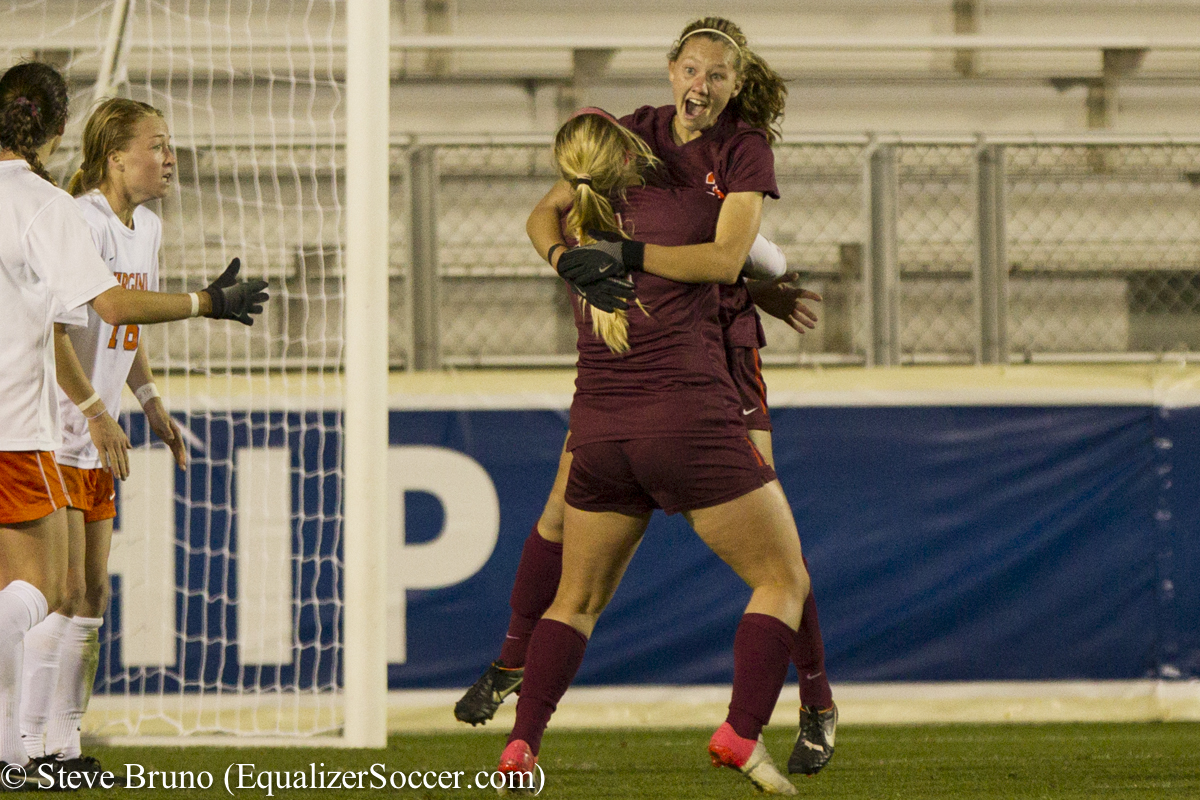 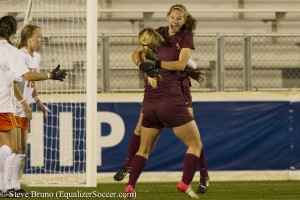 CARY, N.C. – On a semifinal stage that featured four of the top six teams in the nation, dark horse Virginia Tech dropped jaws nationwide as they chopped down unbeaten Virginia 4-2 in Friday’s rush-hour feature.

The No. 6 Hokies (16-3-2) have the satisfaction of being the only team to have beaten Virginia (20-1-0), putting more goals past the Cavaliers in their four-goal victory than ACC opponents managed across the previous 10 contests.

The contest between Virginia and Virginia Tech pitted the in-state enemies against each other for the second time in nine days. The Cavaliers won the Halloween fixture 2-0 in Charlottesville to conclude their perfect ACC season while handing Va Tech only their third defeat in conference play. With Virginia boasting the most prolific offense in Division I as well as one of the top defenses in the country, the Hokies were the David to the Cavaliers’ Goliath in a contest few would have tipped to go their way.

Fortunately, head coach Chugger Adair and his team don’t pay attention to such hyperbole, just like they didn’t bother fretting over their preseason conference ranking, a fairly dour ninth-place forecast by the ACC coaches.

“Maybe we were preseason ranked… I don’t know what we were, eighth? Ninth?” the Hokie coach said after game. “I don’t even know, but that’s where we’ve been, that’s where we’ve finished the last few years and we always think we’re better than that… I would never sleep if I worried about all that stuff, to be honest with you, about not getting the national attention that the team deserve, that these players deserve. It’s frustrating, but I think they’ve done a good job to prove themselves and day in, day out, we use that as a motivational tool for us”.

In their regular season matchup, the Cavaliers opened the scoring in the ninth minute. On Friday, it was Tech’s turn and it would be points leader Jazmine Reeves who broke the ice, ironically, at almost the exact same juncture.

Terrorizing defenses all season with her cheetah-like speed, Reeves feasted on the UVA back line as if they were an ailing wildebeest. In the 9th minute, a pass from Ashley Meier sent the forward off to the races, busting through the Virginia defense. With center back Emily Sonnett unable to close her down, Reeves drove through the middle of the box after a long run and fired away to her left, beating goalkeeper Morgan Stearns from eight yards out.

Senior midfieler Kate Norbo has played against Reeves over the last four seasons, so the Hokie forwards’ shredding runs came as no surprise to her or the Cavalier defense:

“She’s definitely a hard forward to defend and we knew that coming into this game… I think we just weren’t organized enough to prevent those long balls going in to Jazmine. When she gets faced up and turned on your defense, it’s hard for anyone in this country to stop her with her speed”.

Adair says Reeves’s off-season work is what has contributed to her success on the field, a success that’s rubbed off on the rest of the Hokies:

Virginia finally pulled level 16 minutes into the game with a bit of set piece cleverness. Danielle Colaprico’s low service off a corner kick found Emily Sonnett, a converted midfielder now playing in the center of defense, at the top of the box. Sonnett shot a grounder past Hokie keeper Dayle Colpitts for her second goal of the year.

Earlier in the season, UVA dismantled 2012 College Cup finalists Penn State, putting five on the board after going down a goal six minutes into that contest and, with the score now even, it looked like the Cavaliers might be on their way to another thrilling comeback.

There would be no joy in Charlottesville this time, though, as, less than a minute later, Sonnett and the Cavs’ defense again found themselves racing desperately toward their goal, looking at the back of Reeves’s boots as she made another searing run through the exposed back line. UVa had an uncharacteristically difficult time keeping possession in the midfield all evening and a VT theft near the centerline released the forward for another quick-strike goal.

Adair says much of the key to the victory came through that high pressure and control in the midfield, no easy feat when ACC first-teamer Morgan Brian is on patrol:

“We talked about trying to condense the midfield. I think they’re such a good team of moving the ball and moving the pieces around. They’re not stagnant. UVA moves well, they move well off the ball, so we talked about condensing that midfield, working off the ball to double-down and just make it a little tighter space and more difficult to play.”

It was an odd turn of events for Virginia, considering they won last year’s tournament trophy by shutting down a Maryland team that featured a similar pacey, counter-attacking forward in Hayley Brock. 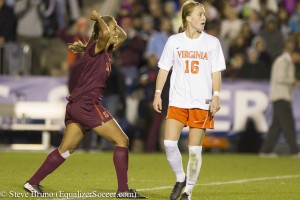 Up 2-1 going into the locker room, Virginia Tech held the lead, but against a Cavalier side that came back from a two-goal halftime deficit to beat Duke earlier this season, a one-goal margin is an uncomfortable lead at best. Coach Adair says his talk at the half emphasized the need to not play negatively by bunkering in to protect their slim advantage:

“If we would’ve come out at the time 2-1 up just defending in a defensive shell, it would’ve been a long game and we would’ve been chasing the ball around. So we were able to attack and continue to possess”.

No doubt feeling the game was still theirs to win, the Cavaliers were dealt a shocking, demoralizing blow less than five minutes into the second half. A Tech corner kick from Jordan Coburn connected with Murielle Tiernan inside the box and the 5’11” freshman headed a dagger through UVa’s heart to put the underdogs up by two.

The goal was Tiernan’s ninth of the season, second only to Reeves on the team, as the All-ACC Freshman Team selection continues an impressive rookie campaign.

Virginia pressed the issue through much of the second half putting up eight shots with three on target in the half. Frustration and desperation crept in, though, as the physical, gritty Va Tech defense began to get under the Cavs’ skin. Even level-headed Morgan Brian lost her cool at one point, giving VT defender Jodie Zelenky a retaliatory shove following an endline wrestling match for control of the ball.

Adair praised his team’s defensive effort after the game and acknowledged the hard work of four-year starter Dayle Colpitts in goal:

“The back line worked hard. As a back line, you’ve got to play as a unit, as a group, and one person might drop the ball, per se, or slip up a little bit and the other person’s got to be there to support them and play for one another, so we did that. It was good team defending and that’s been the back line all year.”

“I think Dayle showed her class tonight once again. I think she’s been solid at the back for four years.”

Colpitts’ 2013 year has been a record-setter thus far, setting new program single-season marks for shutouts (8) and wins (16) while her current goals-against average of .762 is also tops in school history.

Tech added another insurance goal to put the game beyond even the mighty Cav attack in the 71st minute as Katie Yensen’s header made it 4-1, making Makenzy Doniak’s Cavalier goal with six-and-a-half minutes left on the clock seem more of a consolation than a comeback.

For the Hokies, the 4-2 win marked the first time they’ve beaten a No. 1-ranked team since their victory over UNC in 2009. The result was even sweeter as it was also their 16th of the season, the most in program history.

“Our mentality through the season has been to prove ourselves… and finish in the top group in the ACC and the girls have done it.”

Virginia, meanwhile, are likely to still retain their top rank and a home-field berth throughout the NCAA tournament, so redemption may be just around the corner.

Cavaliers coach Steve Swanson says, although his team didn’t play well enough on Friday, he’s not concerned that the Hokies exposed any weaknesses that other teams may exploit going forward in the postseason:

“These kind of teams aren’t anything we haven’t faced before… Tonight we just didn’t do a great job on the counter. There are some reasons for that… mistakes happen in games, things happen, you get a turnover here or there and then, before you know it, they get in behind our defense and we don’t react quick enough. There are other times in the year where we’ve done superbly at things like that.”

“Certainly (there are) some teachable moments for us, there’s certainly some thing we can take away heading into the NCAA tournament. This is just the way soccer is sometimes. You take the good with the bad.”

Sophomore Makenzy Doniak’s disappointment was visible after the Hokies’ upset, but the Cavaliers’ goal leader says they’ll now head into the opening round of the NCAA tourney with a bit of an edge about them.

“I think that our team is disappointed, and we’re going to be, but that just gives us more hunger going into the NCAA Tournament. We’re a close-knit team and this loss tonight isn’t going to break that and I think, if anything, we’re more ready and we want to win it more”.