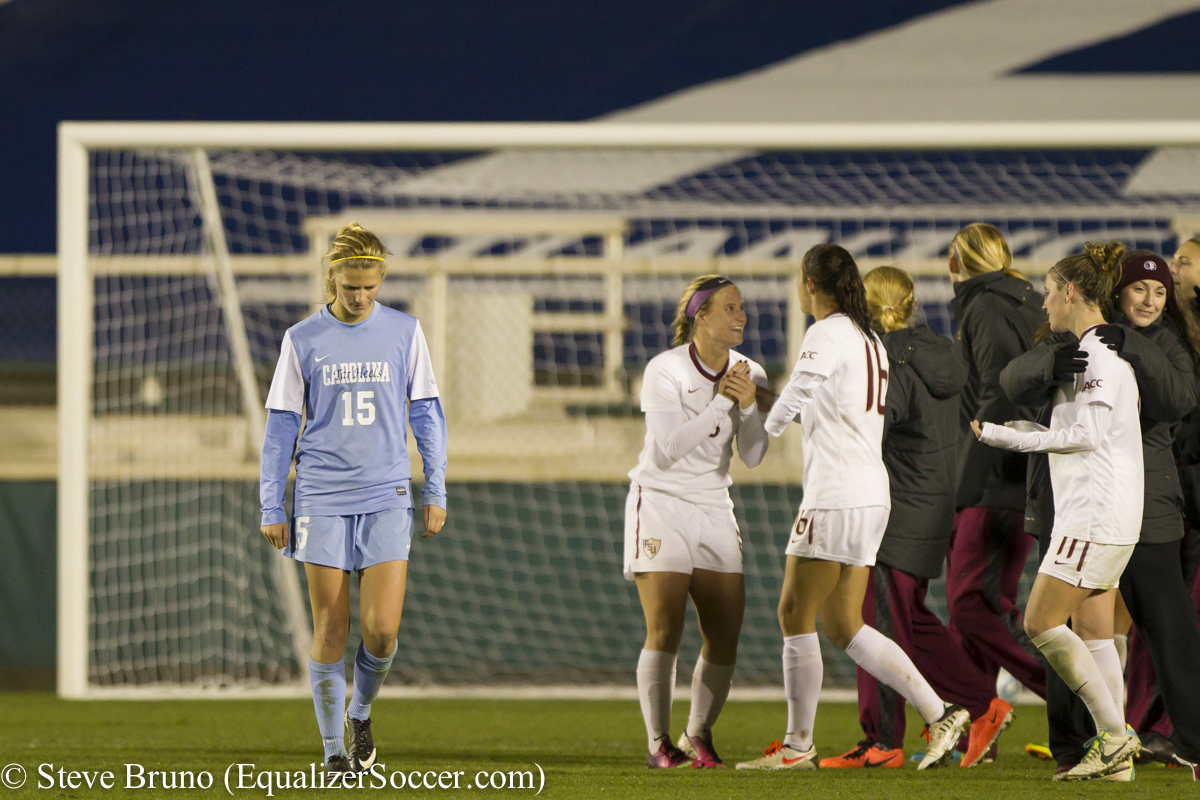 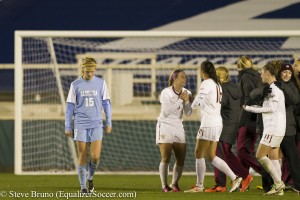 CARY, N.C. – No. 3 Florida State defeated fourth-ranked North Carolina after a golden own-goal broke an overtime deadlock for a 2-1 Seminole triumph. FSU (17-1-3) earned a spot in the Atlantic Coast Conference championship final on Sunday with their fourth consecutive win against UNC (17-4-0), a feat no other program has accomplished in the Tar Heels’ celebrated history.

While Friday’s opening semifinal between Virginia and Virginia Tech at WakeMed Soccer Park featured a six-goal bonanza, the second match was a tense, grinding contest with only a handful of dangerous opportunities for either side.

North Carolina went into battle with 2013 ACC Offensive Player of the Year Crystal Dunn on ice, sidelined with what coach Anson Dorrance vaguely described as “a muscle issue” which she picked up during practice on Tuesday. Dorrance expects the injury may keep his star in plain clothes for the next few weeks, but hopes to have her back sometime during the NCAA Tournament.

Without Dunn to power UNC’s high-revving attack, coach Anson Dorrance slotted winger Alexa Newfield into the vacant attacking midfield role, a position she flourished in during her time at Georgia:

“Obviously, it’s not as much fun playing without such a quality player, but I was very happy with the play of Alexa Newfield. She slipped into that spot (and) she did some very good things. She’s a very smart player, very good in possession, great vision, has a very powerful strike and I thought Alexa did a great job in Crystal’s stead in the middle of that midfield line in the 4-2-3-1”.

As the temperature dropped into the low 30s, it took both schools nearly a third of the first 45 to get warmed up. Carolina registered their first shot around the 15-minute mark when Newfield put a free kick shot from distance straight at FSU keeper Kelsey Wys. Although Carolina would display more attacking intent and purposeful possession in the first half, Florida State’s resilient defense held on and limited the Tar Heels to only two other shots before halftime.

Florida State coach Mark Krikorian only found out Dunn wouldn’t be playing 15 or 20 minutes before game time, but said it was more Dorrance’s use of the 4-2-3-1, a system which they often transition to mid-game, that allowed FSU to keep a foothold on the match despite Carolina’s persistent push downfield.

“The game changed because their system changed,” Krikorian said. “The way we had prepared to play against them was slightly different than what we saw, but many of the teams we play against are playing 4-2-3-1 as they did and that’s probably an easier adjustment than if we had expected them to play 4-2-3-1 and they played 3-4-3”.

After closing out the first half with nothing to show for their offensive efforts, North Carolina headed to the locker room to tinker with their strategy. Dorrance often jokes humbly about the futility of his halftime speeches, but the Carolina head coach credited a move suggested by senior forward Kealia Ohai during the break as the key to finally unlocking the defiant Seminole back line:

“She made a great suggestion to play her off the left side in the second half and we made that switch and put Amber Munerlyn high.”

The adjustment created an immediate opportunity as the pair combined a minute into the second half to spring midfield wrecking ball Meg Morris down the right flank. Morris fired a long shot from a wide angle into the opposite side of the net to put UNC up quickly.

“I think that (adjustment) contributed to our goal. I thought it was a great series between Ohai and Munerlyn and Meg, who finished a great chance”.

With the remaining 44 minutes still to play against a Seminole side that is notorious for impossibly-late goals, the Tar Heels could have put the reigns on their blind intensity for the sake of preserving the lead, but Dorrance suggests that line of thinking may be a little too out-of-the-box for his players.

“We’re not a very sophisticated team,” Dorrance said, somewhat tongue-in-cheek, “so we’re not very good at closing out games. I don’t think if you looked down our roster you could list the word ‘composure’ next to too many of them. I think a lot of our players play like a cat on a hot tin roof and, when you’ve got that as your nature, it’s going to be very difficult for you to sort of sit on any kind of a lead, and that is our nature… We will always struggle to sit on a close lead like that one.”

Although the Tar Heels’ back four did an excellent job of rendering FSU’s potent Icelandic duo of Dagny Brynjarsdottir and Berglind Thorvaldsdottir ineffective (the pair couldn’t manage a shot between the two of them), the Carolina defense would ultimately be their own worst enemy as Florida State began to turn the screw late in the game. Dorrance described his team’s defending as a “panic mode” late in the game as the Seminoles began to send balls into the Carolina box looking for the equalizer.

Marta Bakowska-Mathews appeared to have hit it in the 83rd minute when she nailed a shot off the crossbar which caromed straight down behind keeper Anna Sieloff. The shot was reminiscent of Dunn’s strike against Notre Dame earlier in the season which was well over the line, but wasn’t called. The English midfielder’s shot was also judged to have not crossed the line completely, although it was probably too close to call accurately from field-level, and the Seminoles protestations fell on deaf ears.

Newfield had a chance to put the game out of reach two minutes later as she broke through a Seminole back line pressed high in the attack. Appearing to only have Wys standing between her and a glorious finish, Newfield dribbled toward goal, but German international Isabella Schmid quickly closed the gap with the Tar Heel midfielder and tackled the ball away before Newfield could get within striking distance.

With four minutes left in the half, the Carolina defense finally folded as a long service from goalie Kelsey Wys off a free kick caused confusion in the box and, on a ball that deflected off a Carolina defender, the Seminoles tied the game.

Incredibly, the goal marked the ninth time this season Florida State scored a game-winning or game-tying goal in the last eight minutes of regulation. It’s a full 90-minute toughness even the Tar Heels have witnessed this season, dropping their away contest to FSU off an 83rd-minute goal.

“What it does most for me is it gives me confidence,” FSU captain and center back Kassey Kallman said of her team’s penchant for miraculous finishes. “I never doubt for a second that we can’t come back in a game. Being confident with four minutes, three minutes, two minutes left, that your team’s going to still score a goal and tie it up is very special and it’s a very nice quality to have, but hopefully we can figure out how to score earlier”.

The 1-1 tie sent the game to overtime and Carolina would score again for the golden goal, but, again, it was on a ball that ended up in their own net.

An aggressive run at the Carolina defense in the opening minutes by midfielder Jamia Fields allowed the Seminole to serve the ball into the box, where a committee of Tar Heel defenders couldn’t deal with it and eventually knocked it into their own net.

The Seminoles mobbed Fields while the UNC defenders stood rooted at the spot of the crime, a matching set of disbelieving looks on their faces.

“Once again our group was resilient and was both physically and mentally strong through the course of the game,” Krikorian said, appraising his team’s performance. “From a defending side, I thought it was pretty good, we limited their chances and opportunities at our goal. We didn’t create enough, but in the end I guess we did create enough”.

“I’ve said all along with Kelsey in the goal, and Grubs and Kass (center backs Kristin Grubka and Kassy Kallman), the triangle that we have in the back is as good as there is in college soccer”.

For Kallman and the rest of the FSU upperclassman group that won the ACC tournament in 2011, Sunday will be a chance to again hoist the trophy after being dumped out of the semifinal rounds of both the ACC and NCAA tournaments in 2012. They’ll face No. 6 Virginia Tech, a team that has never beaten the Seminoles through 12 contests, with the only draw coming in 2008 on the same field in the ACC Tournament, a game in which the Hokies advanced by way of PK shootout.

Carolina, meanwhile, are now on a four-year stretch without an ACC Tournament trophy, meaning this year’s stellar class of Dunn, Ohai, et al. will graduate having never lifted that particular piece of hardware.