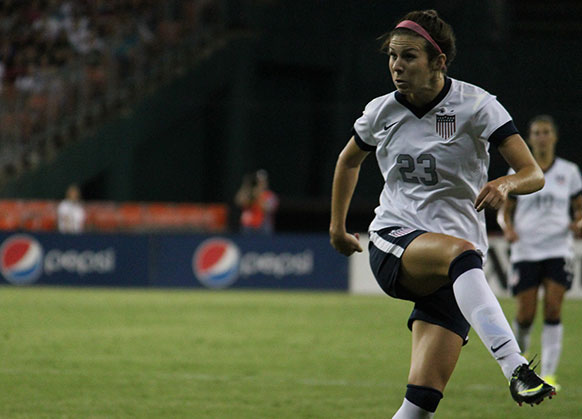 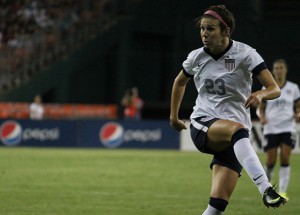 Erika Tymrak is back with the U.S. women's national team for Sunday's game vs. Brazil. (Photo Copyright Caitlin Murray for The Equalizer)

A trio of young European-based players are back with the United States women’s national team for Sunday’s match against Brazil in Orlando, Fla. (3:30 p.m. ET on NBC).

Bayern Munich’s Erika Tymrak and Amber Brooks, as well as PSG forward Lindsey Horan are all scheduled to arrive in camp Wednesday night with the rest of the squad. Tymrak, 22, earned her first – and thus far only – cap for the U.S. against Mexico on Sept. 3, while 19-year-old Horan has only one appearance from March’s Algarve Cup and 22-year-old Brooks has still never made a senior team appearance.

Noticeably absent from both the U.S. and Brazil rosters are Tyresö players, meaning Marta will not appear for Brazil and Christen Press, Ali Krieger, Meghan Klingenberg, and Ashlyn Harris will all be with Tyresö for a first leg Round of 16 UEFA Women’s Champions League game against Denmark’s Fortuna Hjørring on Saturday. Megan Rapinoe will miss the match to be her club, Lyon, to face Turbine Potsdam.

Defenders Leigh Ann Robinson and  Stephanie Cox — in her comeback following the birth of her child — are back in camp for the U.S. as Tom Sermanni continues to sort through his options at fullback.

Here are the two teams’ rosters: